Sunday I shot over to the far, northeastern corner of Ohio. I wanted to get off as quickly as I could, so after the final Mass, a quick shower, I was on the road at 12:46 pm. My first stop was going to be the James A. Garfield tomb in Cuyahoga County (where I've been before, but I've never visited the assassinated president's grave); and just as I was setting up my tablet to provide directions, I saw that the Garfield tomb closes at 4 pm on Sundays; oops! I wouldn't make it. So I eliminated that stop; first would be an unusual building in Geauga County.

Meanwhile, I had a long drive across counties I wasn't going to visit this time; I'm saving them for the next outing. But I did get to check off Crawford County as one I've at least driven through. As I passed through Mansfield (Richland County), I noticed signs promoting an event at the Ohio Reformatory -- apparently, this past weekend was an anniversary for the Shawshank Redemption, which was filmed there. I had nine miles before the exit! Do I pull off and check out the activities? I opted not to; it would blow up my plan, and besides, when I came back for a visit later, it'd be quieter and fewer delays. Full steam ahead!

The chirpy voice on my tablet led me unerringly to my first stop: 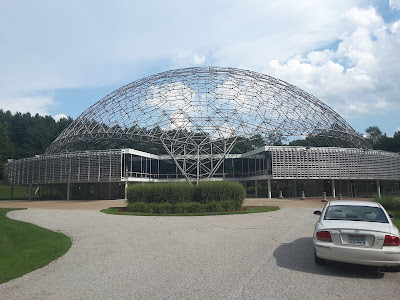 This is the headquarters of ASM International. According to Wikipedia, this is the world's largest open-air geodesic dome. I was pretty excited when I arrived here, because this is something a little different, and when I called ahead, the person to whom I spoke was unsure if the gates would be open on Sunday afternoon. Indeed they were!

Here's another look from the inside: 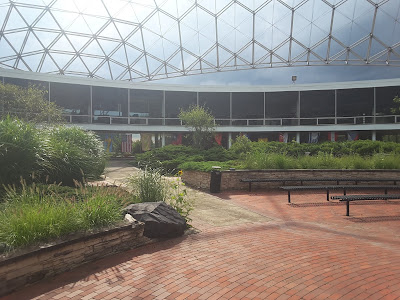 The building forms a semi-circle on one side of a lovely garden; all around the perimeter were samples of natural materials which the American Society of Metals was created to promote. The place was deserted when I arrived, but I imagine this might be a pleasant place to work.

When I took this next picture, I saw the sky was threatening, so I decided to head on: 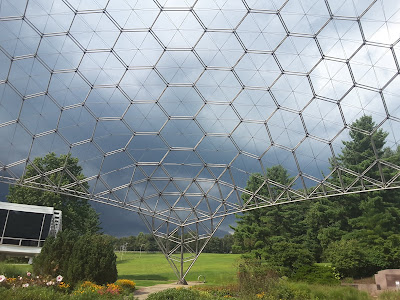 For some reason, my GPS stopped working; but I'd printed out directions, so I simply did things the old fashioned way. My next stop was Lake Erie. Along the way, I got these images: 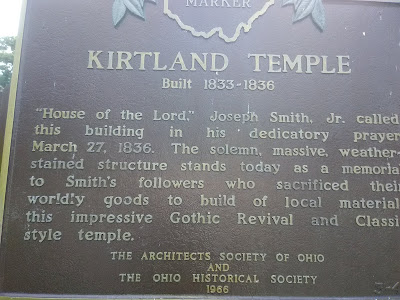 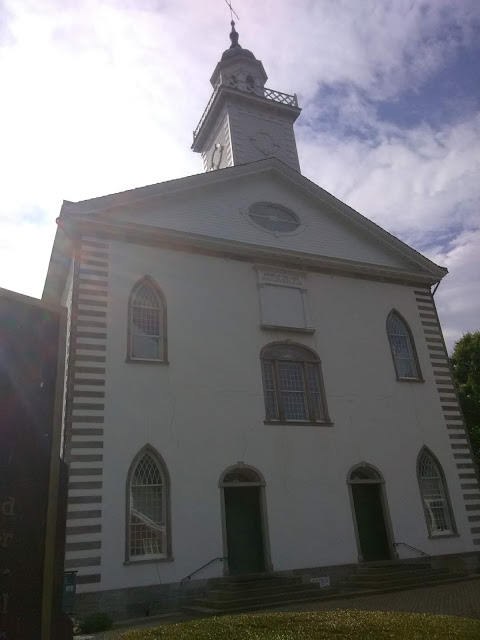 Next I drove through Mentor, which I'd forgotten was home for a time for President Garfield. I'd missed out on his tomb, but what about the Garfield National Historic Site? I pulled in... 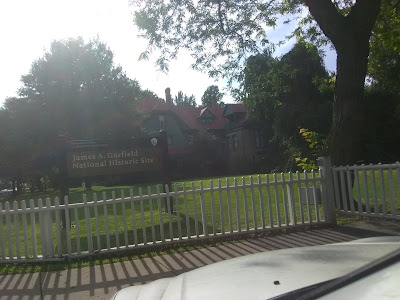 Closed! Strike two! So I moved on to Fairport. First the lighthouse, and the museum I didn't visit (but it was open!): 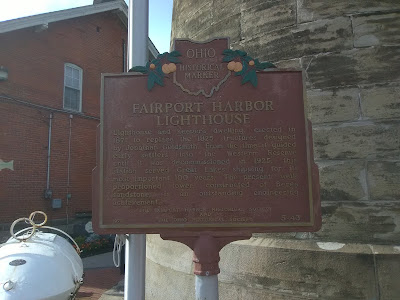 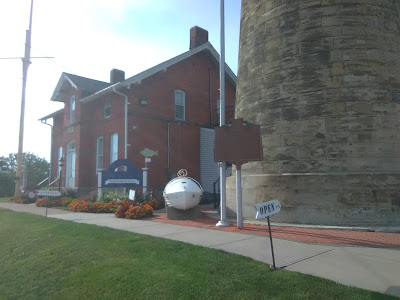 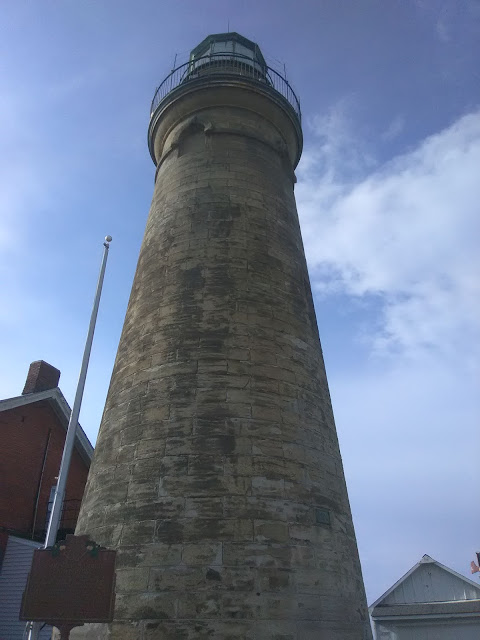 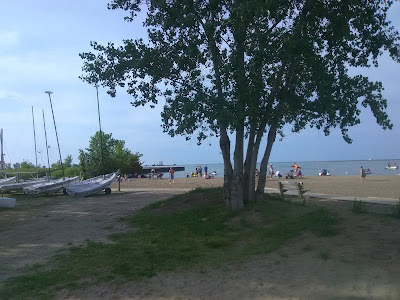 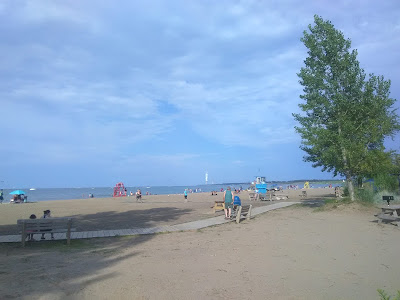 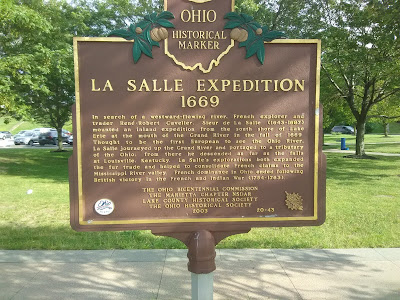 Part of the reason I was rushing is I wanted to get to my next spot for dinner, hoping for a nice sundown, and then to my place for the night. This was a matter of some frustration. When I looked on Expedia (boo, hiss!), $99/night caught my eye. Pretty good for so close to the lake! Only after I booked it (non-refundable) did I discover there was a $75 cleaning charge plus some other fee of $21. Now, it was partly my fault: it wasn't a hotel room, but a condo intended for a group. I went back to the listing I'd looked at, and there, in tiny print, it mentioned additional fees. So I thought, when I talk to the person who checks me in, I'll explain that I'm only one person, staying one night, and not using the kitchen or anything but one bedroom. They'd be foolish to pay for a full cleaning; and if they save some money, maybe kick some back to me? Anyway, I didn't want to arrive too late.

I drove along the Lake Erie Coastal Trail, and passed through Saybrook: 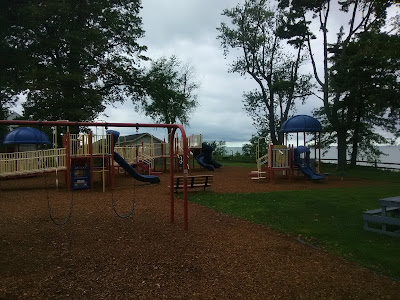 And here's another view of Lake Erie: 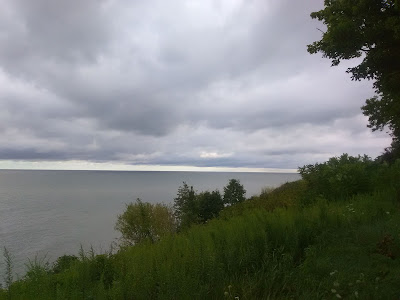 I came to Geneva-on-the-lake, where I was aiming to eat at the Crosswinds Grill, which looked promising. From what I could tell online, it looked like the only restaurant right on the lake, so that did it for me. As it turned out, it had both a dining room and an outside patio, which was several steps down the hill; the menu in the restaurant looked great; the patio was simpler. Oh, and they were out of perch (the local favorite)! Still, it was pretty good; especially the view: 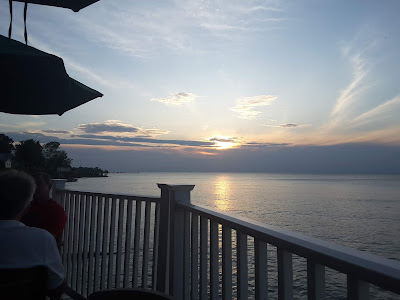 After this, I had a short drive to my place for the night. GPS was working again, so I got there with no hitches. I pulled up to a cabin. All dark. Who was going to let me in? I looked again in my email folder; nothing. I called the number, left a message, and waited in my car. A woman called back, saying, didn't you get an email with instructions? No email, I told her. She gave me the code to open the lock box on the door, holding the key. I explained my situation, and made my pitch for rebating at least some of the cleaning fee. She was rather vague; she had no idea how to do that. The house was fine; no wifi access (due to no email, which never came). And when I got back, I tried to give some feedback to Expedia, but no success there. Not sure I'm going to do any more business with them.

That was Sunday; Monday in my next post.
Posted by Fr Martin Fox at 9:58 AM

Great post...good pics of Lake Erie!
Seeing this about Expedia, we won’t use them either. So sorry!