Day two for my exploration of Ohio's northeastern corner.

From Geneva-on-the-lake (in Ashtabula County) I headed south. My first stop was going to be Clarence Darrow's Octagon House in Kinsman, and into Trumbull County, by the way. But first I came through Gustavus, home of the "federated" church. That sounded interesting. Here it is: 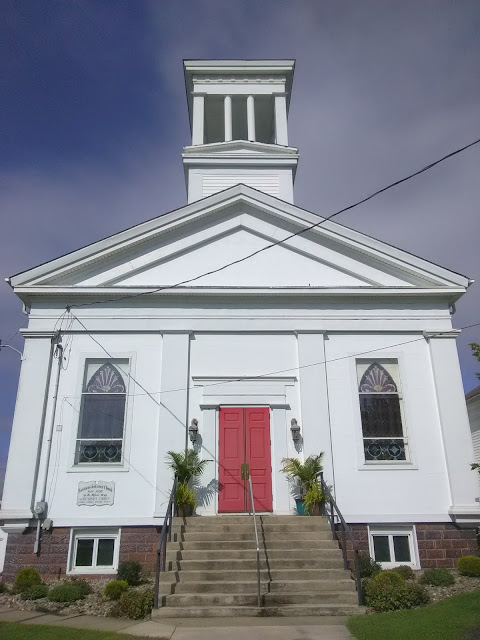 Apparently, it is a combined United Methodist and United Church of Christ congregation; the website mentions something about a Presbyterian church as well. I'm glad everyone gets along so well in Gustavus! Anyway, here's the town hall: 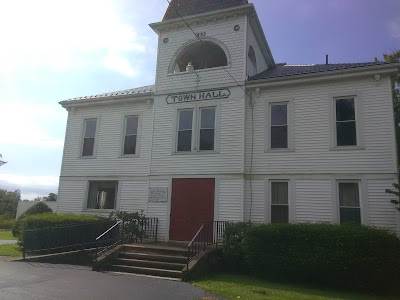 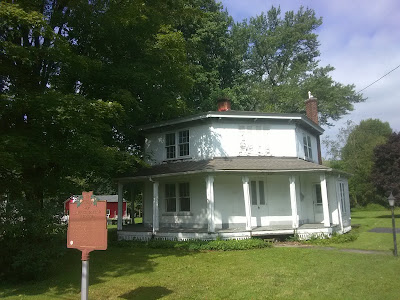 Just as I arrived, the guy who lives here showed up; "no problem!" came his response to my request for pictures. He explained his landlord was planning to fix it up. 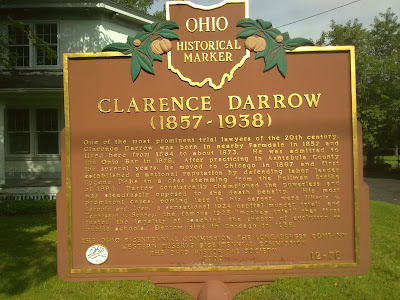 When I was a boy, I wanted to be a lawyer; and Clarence Darrow was the sort of attorney I imagined being.

Next stop? Niles, Ohio, home of the 25th president, the fifth from Ohio, and the third president to be assassinated. Here's his monument: 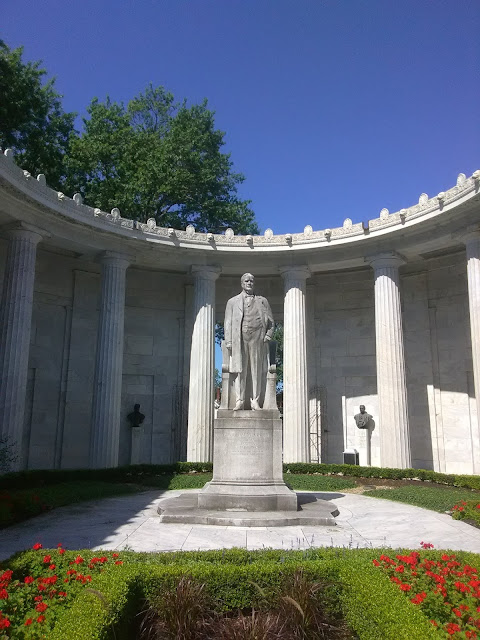 All around were several other busts; a woman from the library told me they were either cabinet members or advisors. For example, Mark Hanna, who masterminded McKinley's campaign: 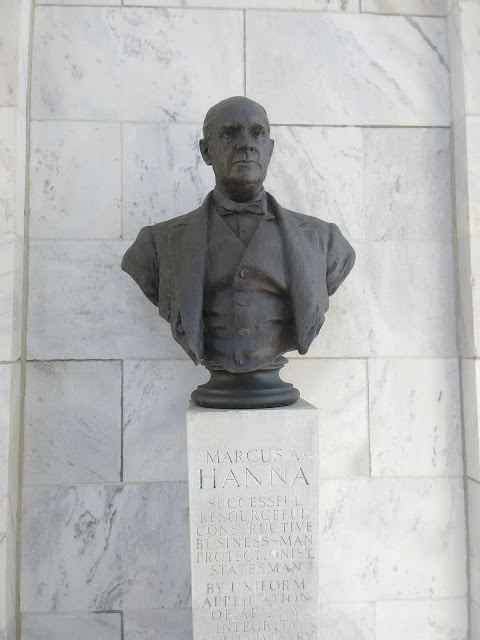 And here's the sixth Ohio president -- the only man who served both as president and chief justice: 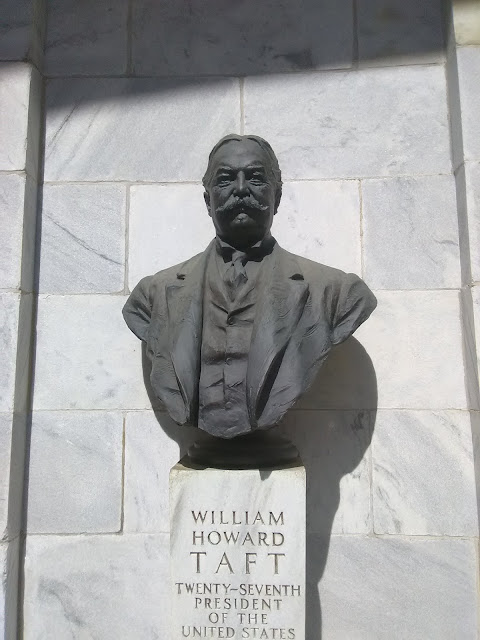 Several more busts were inside the library -- which turned out merely to be a local public library, across the way was a presidential library, which was closed of course! -- and these were benefactors who helped build this memorial. For example, Andrew Carnegie: 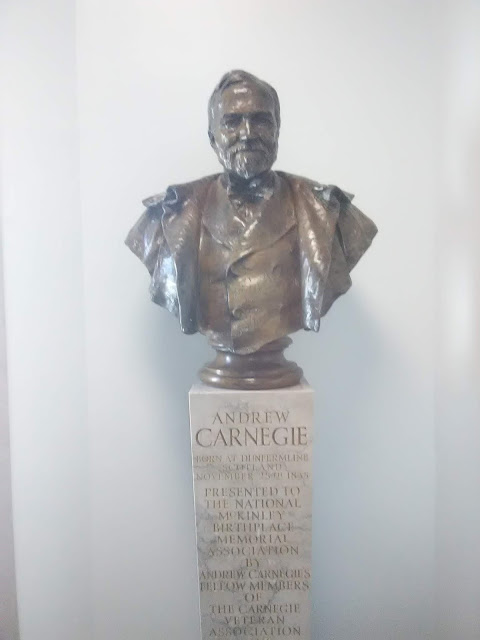 Niles is where McKinley was born and grew up; a few steps down Main Street is the spot, occupied by a replica of that house. 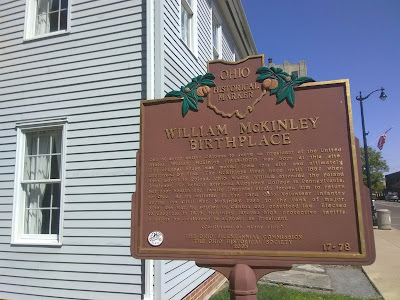 What became of the original? This kind lady explained it to me: 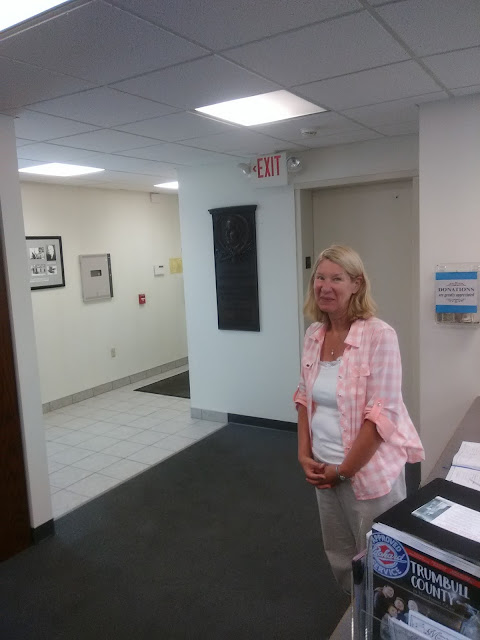 The original house was divided into two; then each part was moved elsewhere; then when McKinley became famous, someone obtained the two parts and put them back together, locating them somewhere else in town (she told me but I didn't remember that detail); then that person fell on hard times, vagrants took over the house, and it was burnt down. Only a few things in the house actually belonged to the McKinley family.

Here are some views of the house. William was number seven of nine children; with four bedrooms, so the children would have slept three or more to a room: 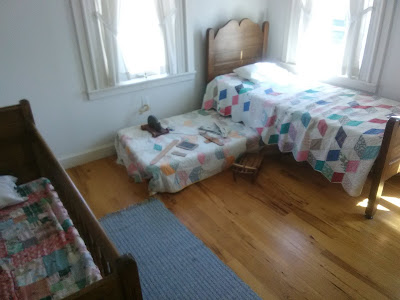 Here's a view of the kitchen and part of the dining room. 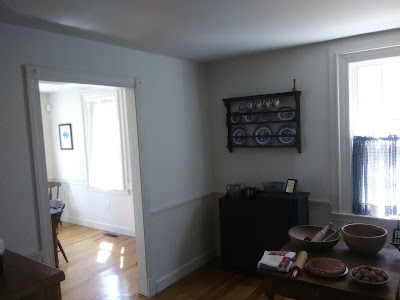 Here's some of McKinley's political memorabilia: 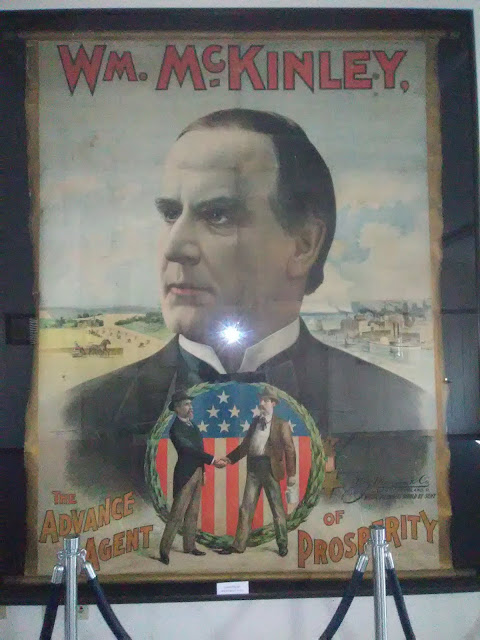 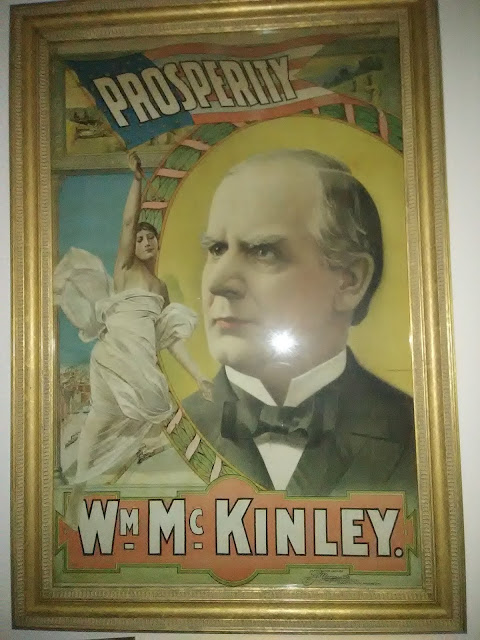 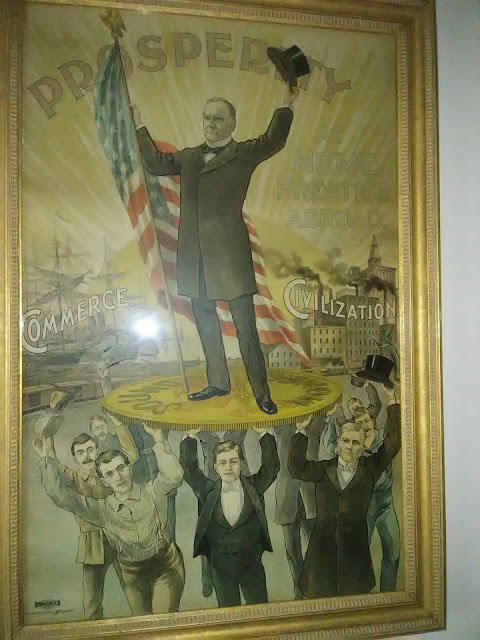 After Niles, I planned a visit to Hiram (in Portage County) -- this was my last chance for anything Garfield, as there was a house there he lived in, probably when he attended college there. But first I passed through Warren, Ohio, which was one of the earliest settled areas of the state. Alas, lots of decay there: 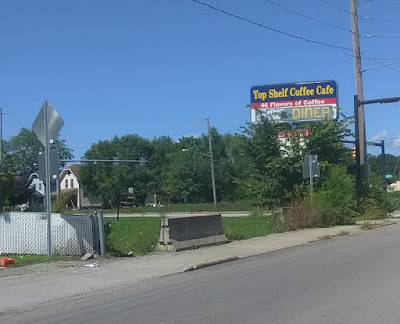 I snapped this as I drove by. The sign is still there, although nearly overgrown; the cafe, with all it's wonderful coffee, is long gone. Finally, GPS led me to Hiram, home of Hiram College, and to this location: 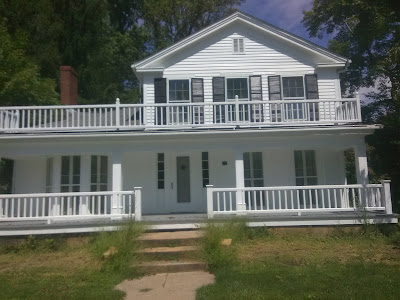 Presumably, James A. Garfield lived here; but there was no indication that it was open for the public, so strike three on Garfield, and I moved on.

My last stop of the trip was going to be Kent State University, where on May 4, 1970, four students were killed when Ohio National Guard soldiers fired into a large mass of students and others protesting the Vietnam War. Before I got there, I passed through Freedom and Ravenna: 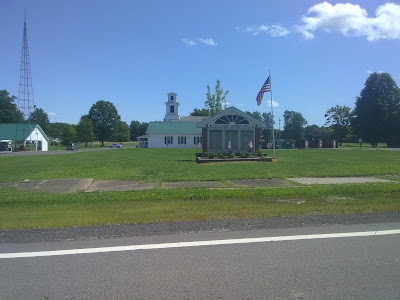 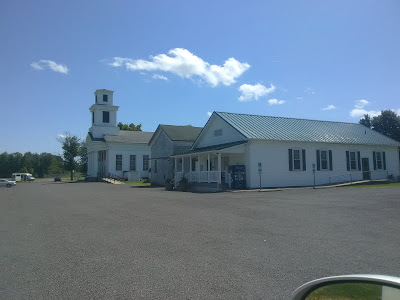 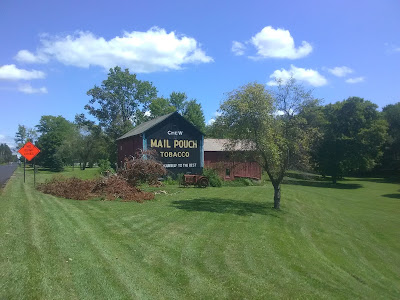 I've passed LOTS of Mail Pouch barns, but this was the first I got a picture of. It looked in good shape!

Like so many college campuses, it wasn't easy finding the right way to get onto Kent State campus, or to find legal parking. Someone from the university waved away my concern about a ticket: they'll just figure you're a parent helping your kid move in.

Here's some information about the events of May 4, which is commemorated on campus with a center providing more information and background. Without going into all of it: it was a difficult time. 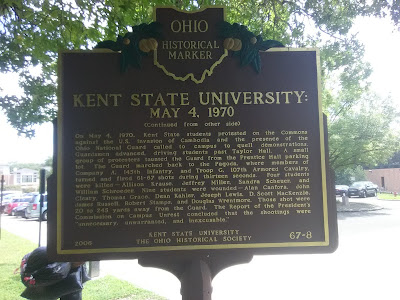 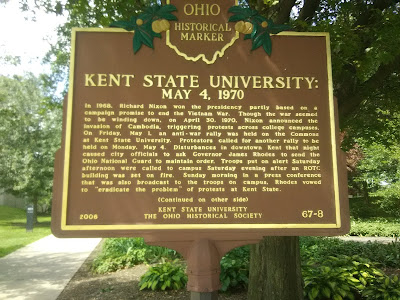 Here's a view of the area where the demonstrations happened. I might add, for clarity, that one of the buildings on campus was burned down and there had been rioting in town. It was tense, not peaceful, as here: 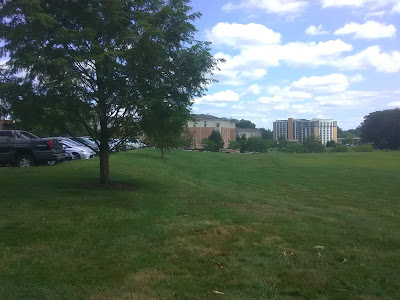 The four students who died were killed in a parking lot, and so it remains today. The places where they were shot are marked off with pillars thusly: 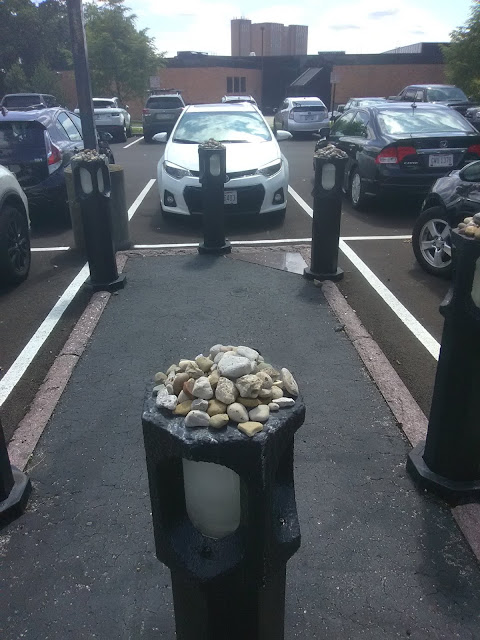 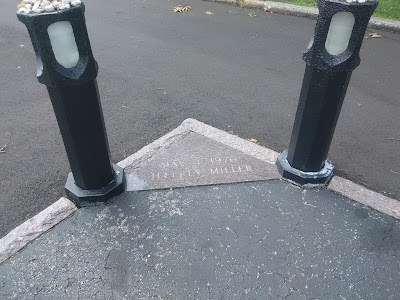 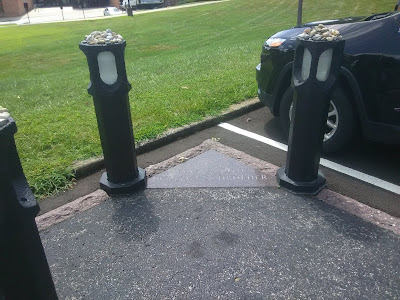 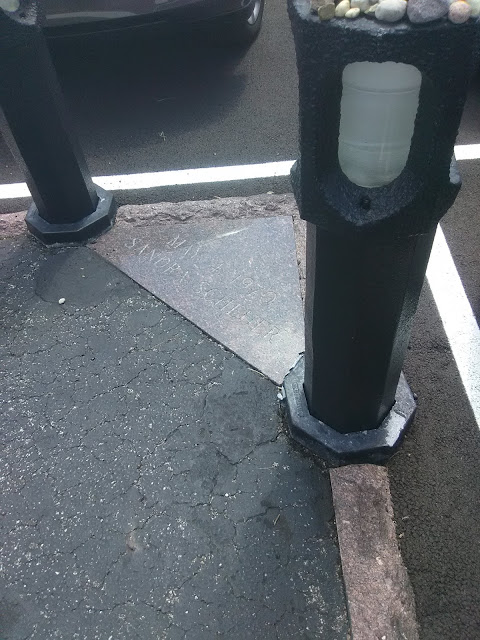 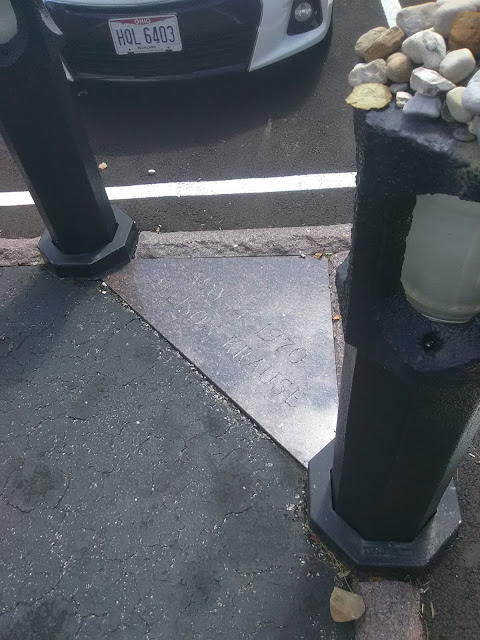 You may be wondering, why the stones on the pillars? I'm guessing, but this may be reflective of Jewish custom of leaving a stone when visiting a grave, so that the family knows someone visited. Two of the deceased students, according to Wikipedia, were Jewish.

After this, I headed home. I made a small detour through Summit county, before getting back on I-71 and U.S. 30, then home.

Progress to this point? This trip brought me to five new counties, leaving 13 I've only driven through, and 16 I've never visited in any way, for a total of 29 I'm still planning to visit in coming months. If it works out, I'll make another outing this coming weekend, taking me back to the lake, and then down through the center-north part of Ohio; if all goes according to plan, I'll tick off nine more counties, four of which I've never visited at all.

* After some thought, I changed the headline, "new" to "sad," to reflect the content.
Posted by Fr Martin Fox at 11:32 AM