Monday I headed off at 9 am toward Ada, Ohio. This is the home of Ohio Northern University and it shows; I'm not sure how much of this town would be here if the university shrunk, or even closed. (Nevertheless, as I've written elsewhere, I think the higher education bubble must be burst.)

Before I got to Ada, I took a small detour through Lafayette, a tiny little town; and although I saw plenty of homes and cars, I think I saw only one or two people about. Here are a few scenes: 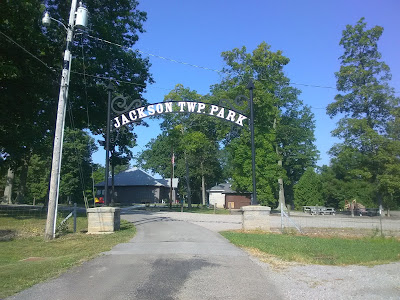 This was the Lutheran Church. There were several others. 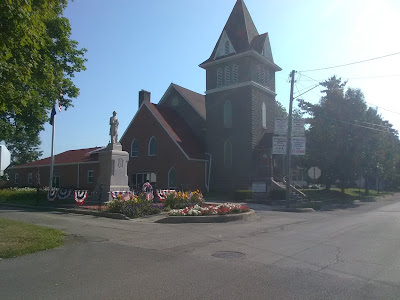 Here's a close up of the monument to the Civil War soldiers. These are everywhere in Ohio. I'll say more about this later in this post. 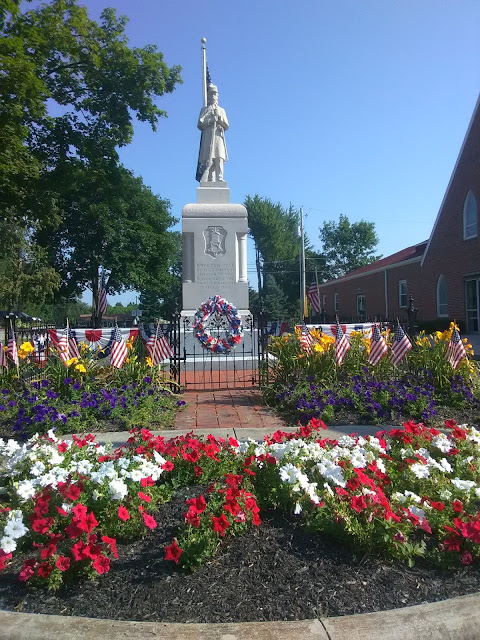 On to Ada. What did I see? Well, no pictures of them, but coming into Ada I saw lots of huge windmills. Most were not turning. Do I need to explain how crazy that is, to build these things and pay for them, and not have them generate electricity? In fact, they surely must draw power at some point?

Here is the Ada train station that once served the Pennsylvania Railroad. We're looking down the track toward Chicago; New York is the other way. The Broadway Limited flew through here, but I can't find out whether this was a stop. 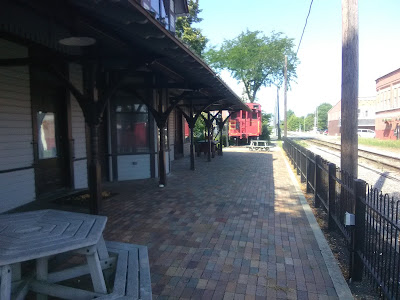 Outside the station, yet another memorial for the War Between the States: 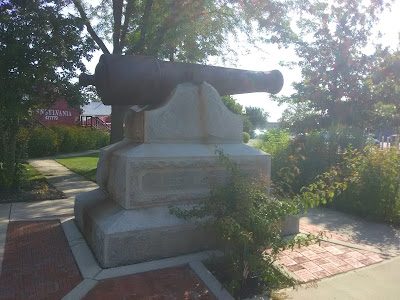 "Lest we forget," maybe cut down that weedy tree? Here's the other side: 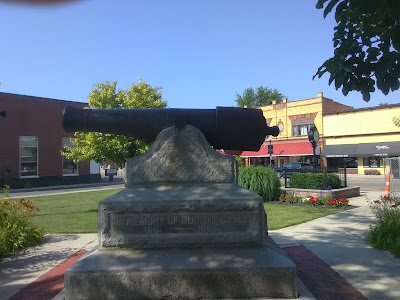 More information about the station: 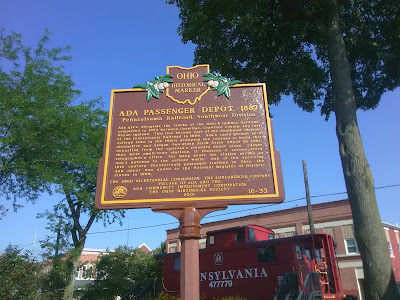 From here the plan was to make for Findlay, the home of Marathon Oil, which had its start as the Ohio Oil Company in 1887, which John D. Rockefeller made part of his Standard Oil Company two years later, until it was broken up in 1930; Marathon Oil was born.

But then I realized: in order to visit Hancock County, I didn't need to go all that way; I had a full itinerary after this. So I looked at the map, and made for Williamstown. It didn't help that I didn't know of anything to see in Findlay (suggestions? tell me in comments). So I drove up to the Lincoln Highway -- aka, U.S. 30 -- and shot over to Williamstown. Here it is: 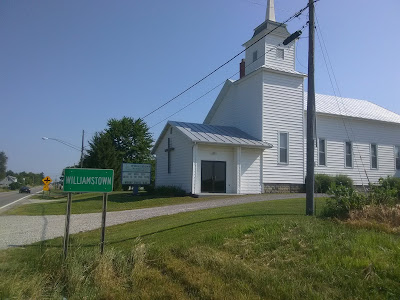 And, that's pretty much it. It no longer has a post office, but it still has a Wikpedia page.

So I turned south on U.S. 68 (which, by the way, runs from Findlay down to Riedland in the western nub of Kentucky) toward Kenton, which was named for Simon Kenton, a significant figure in exploring and settling Kentucky and Ohio. Despite my regard for him, I skirted his namesake city and began my way toward Marion, Ohio, where I hoped to spend a good amount of time. This is the home of Ohio's fourth president, Warren G. Harding, who is much maligned, but in my judgment, his term was -- together with that of his successor, Calvin Coolidge -- the last, best example of presidents who governed in a constitutional way. It's almost quaint now to recall the reasons Harding's reputation suffered: he had affairs and too many cronies in his government who profited from their service: hahahaha! (By the way, did we ever find out how Joe Biden ended up so rich?) Anyway, I was really looking forward to paying due homage; and I'd accomplished visits to Hancock and Hardin. So down S.R. 309 we go! In case you were wondering? More windmills. Not turning much.

There was a humble looking store in the ambitiously (and utterly incongruously named) crossroads of Big Island; but the glories of Harding awaited me! I kept going.

Upon arriving in Marion, I was struck by the huge, brick warehouses that loomed ahead. I was near the railroad, and it looked like Marion had been a major hub at one time. According to Wikipedia, the city boasted major industries, one of which produced steam shovels that dug the Panama Canal and helped build the Hoover Dam. The old Chessie System (CSX today) and Norfolk Southern still pass through. As I drove over the tracks, I saw the old train station was still there. I decided to double back and check it out, causing the voice on my phone, providing directions, to cluck disapprovingly.

A treasure trove! Here are some photos. The station was open! I walked in. 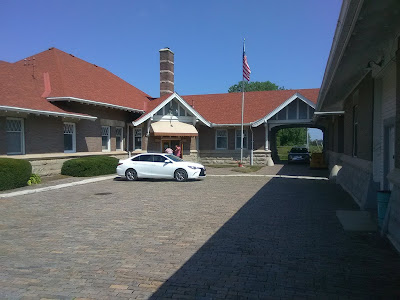 Here's a neat map of railroads in Ohio circa 1902: 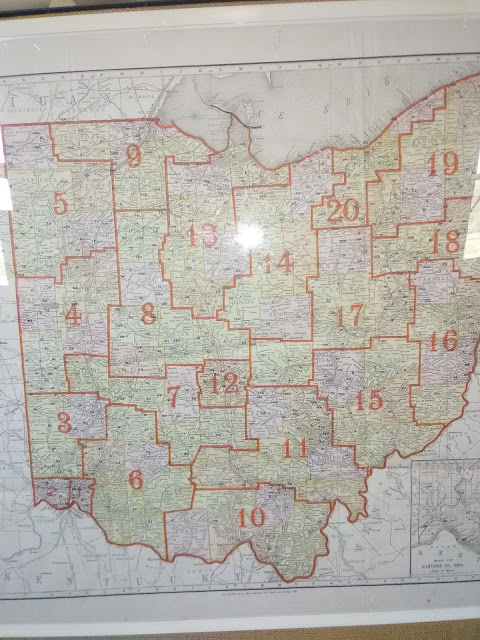 Here's the key for the map: 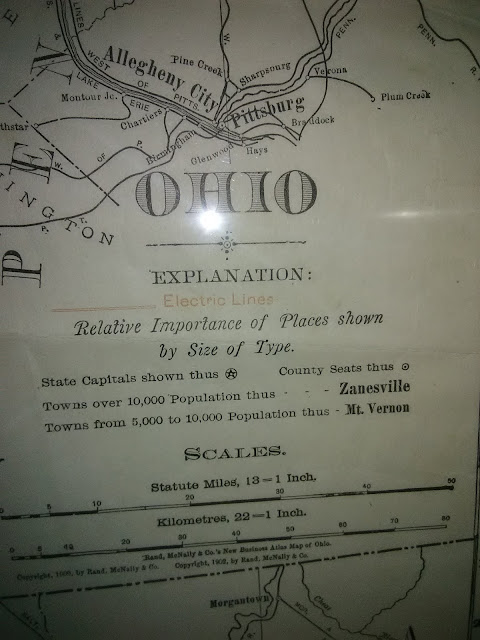 Let's see if Russia is on the map: 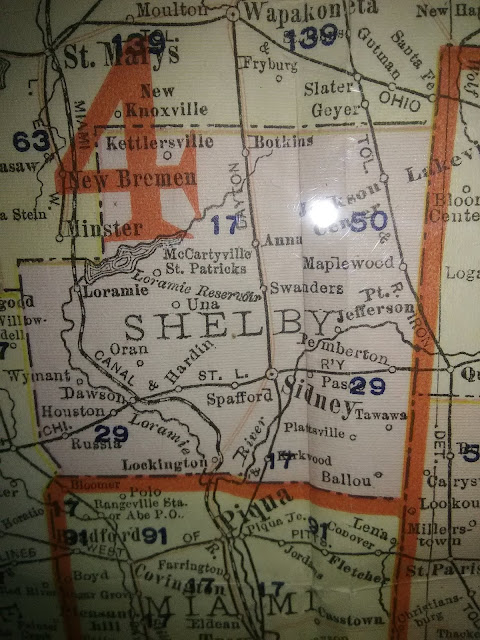 Tons of fascinating details there, including place names unfamiliar to me such as "Spafford," "Wynant" and "Una." Notice the canal is still there. If you lived around here, you had five railroad lines nearby; it would be a bit of a hike to either Quincy or Saint Paris for the Detroit, Toledo and Ironton Railroad,  but in Piqua you could hop on the Baltimore and Ohio (the north-south line) or the Pennsylvania railroads. (The Penn line is gone, but the B&O line, now part of CSX, still runs.) Even here in Russia, you could flag down the Cleveland, Cincinnati, Chicago and St. Louis Railway, also called "The Big Four" -- which is also now part of CSX. But what are those lines going through Covington? I had to dig for this (just for kicks, here's an awesome railroad map.) The east-west route was part of the Columbus, Piqua and Indiana road, chartered in 1849. It eventually became the Pittsburgh, Cincinnati, Chicago and St. Louis Railroad, commonly called the Pan Handle Route, and ended up as part of Pennsylvania R.R. The north-south line? I can't find anything; if you have any information, include in the comments please! 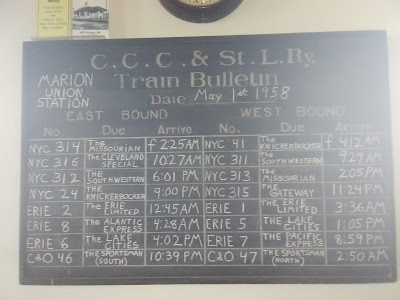 OK, time to move on to the President's house! I headed out and down the street, following the signs. I didn't bother with GPS; surely Marion was going to give me excellent directions to its most significant historical site? Hmm, maybe not; I ended up down by a bunch of fast-food places, and was sure I'd missed it. So with GPS's help, I found my way back. Here's where it brought me: 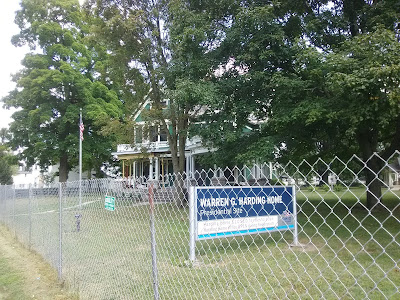 Welp -- President and Mrs. Harding are buried nearby, let's go there... 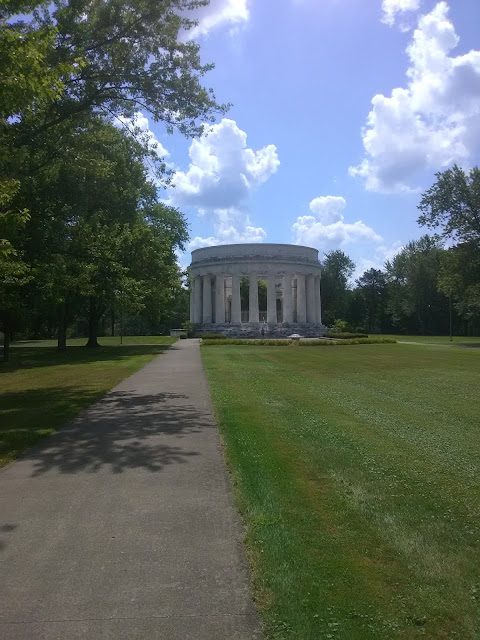 And here's their graves: 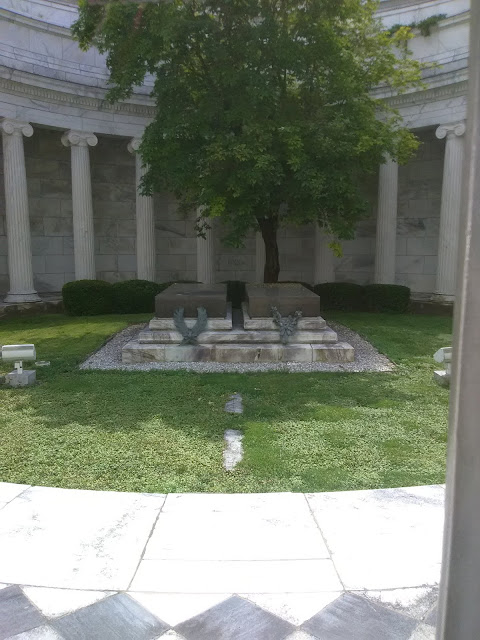 I prayed for them.

Now what? Now on to Delaware, where I intended to visit Ohio Wesleyan University; I'd heard there was some interesting architecture there. On the way there, I passed through a lively looking downtown; but I didn't dare stop for a beer, or else my trip would be sandbagged.

Although I was lacking a parking permit, a couple of students assured me there'd be no problem; so I found my way first -- thanks to another helpful person -- to the Slocum Reading Room: 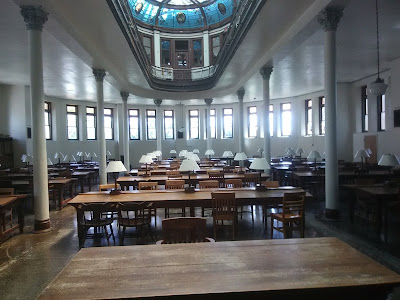 It was closed up for the summer and a bit hot and stale. But the stained glass up above interested me. Here's information about the windows above: 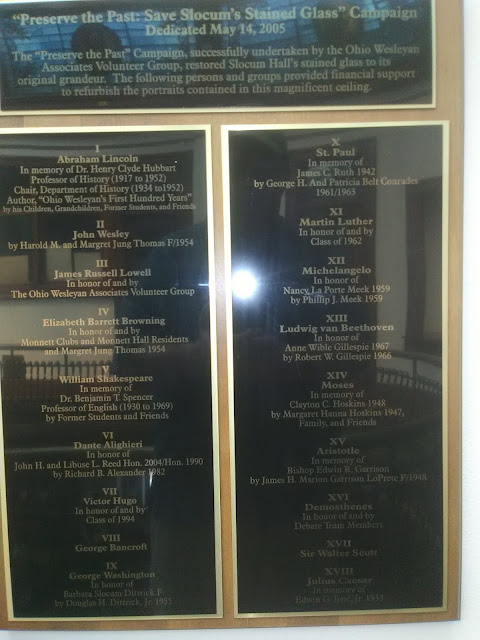 As I read the names, I wondered -- in these days of "woke" vandalism of monuments, I wondered which of these images would soon need to be removed? 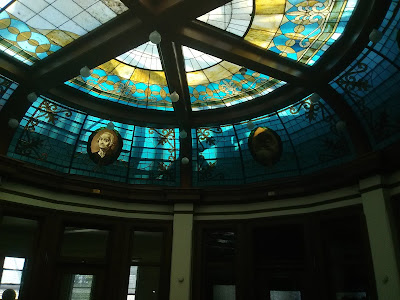 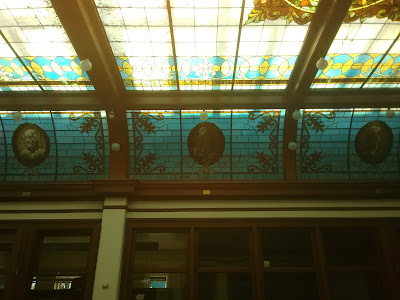 Here's a lovely window I saw on the way out. I wonder if students in the near future will know what it means? 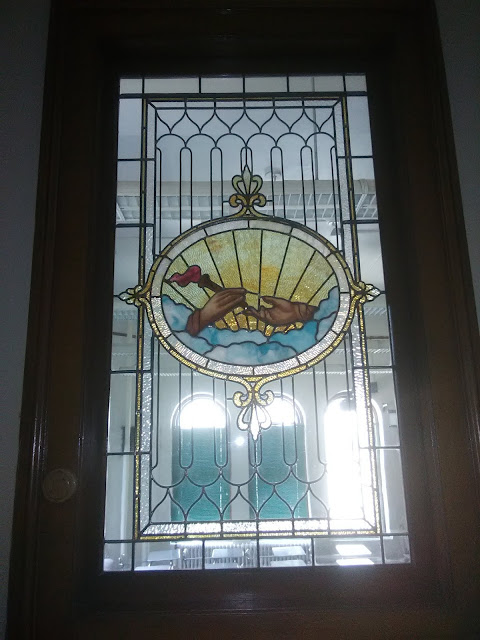 Before I left OWU, I ducked into the Edwards Gymnasium -- it was supposed to be something to see. Here's what I saw, you decide: 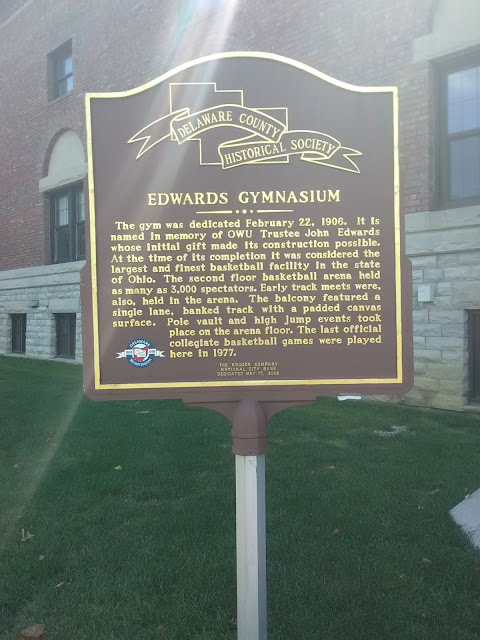 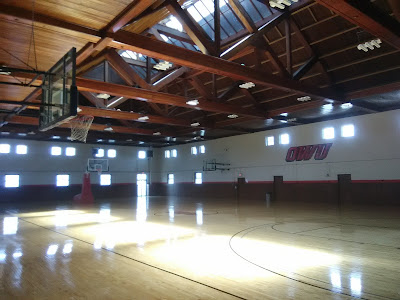 There was also a natatorium around somewhere, but I thought it might not be best for me to roam around a college gym, so I headed on.

I got on U.S. 36, making for Marysville, the county seat of Union County. Along the way I detoured briefly into Ostrander, but didn't get any pictures. I found my way to the courthouse; on my way, I snapped this photo of First Presbyterian Church: 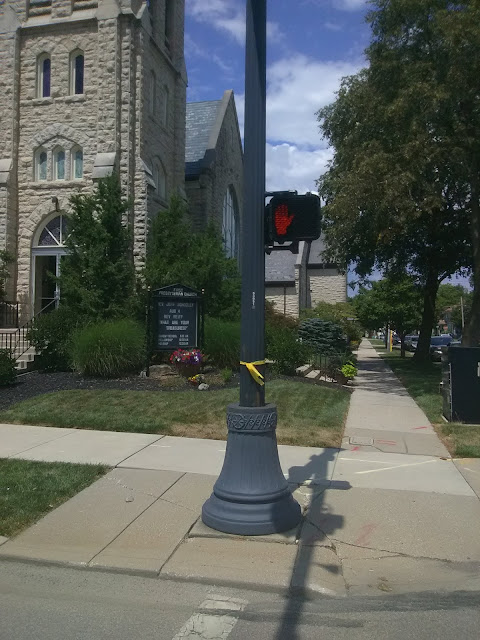 Why do Protestants -- when they don't name their congregations after a saint or a place -- always go for "first this-or-that"? No one wants to be second; but remember, Jesus said, "the last shall be first, and the first..."

Here's the courthouse, with an impressive monument to all who have served in the military: 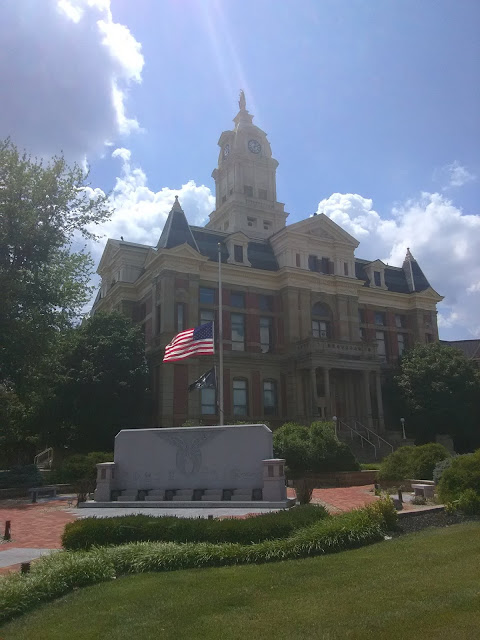 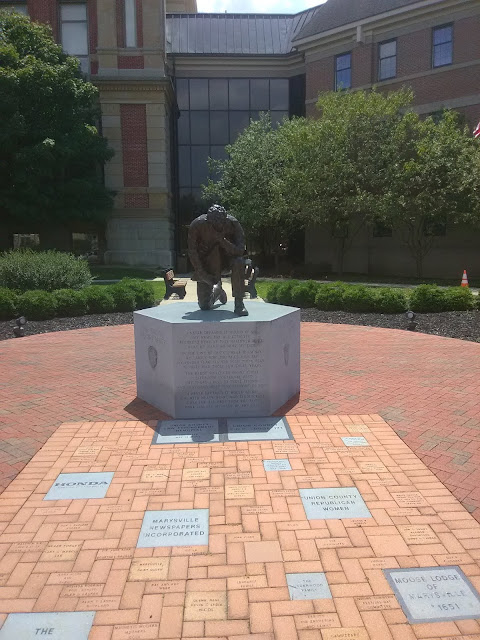 Walking back to my car, I noticed this on the reverse of the war memorial. If you blow it up, you should be able to notice some interesting details: 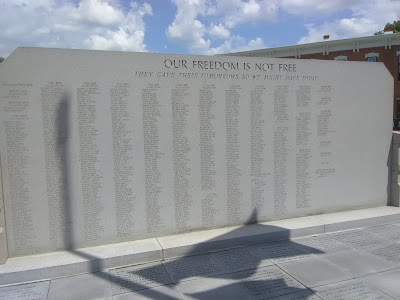 Did you notice? No one from the Revolutionary War; three who were involved in the War of 1812 and the Mexican War. And then? Wow! Of twelve total columns, eight are dedicated to the Civil War; and of that, all but one are "killed in action." Now you know why every county, every town all over the country, north and south, has these monuments. A LOT of their sons died.

After this, it was time to head home. This trip, plus Sunday's, meant eight more counties visited -- meaning, I stepped on the ground -- to 40, plus another 25 I've at least driven through (that was 31).

I'm already looking ahead to a visit up north: Port Clinton in Ottowa, then over to Huron, Lorain, Ashland, Richland, Crawford and maybe Morrow, Knox and Licking; I've only driven through Richland, Ashland and Licking. This would be a two-day trip, as would a jaunt way down south, to skirt along through Adams, Pike, Scioto, Lawrence, Gallia, Meigs and Jackson counties. I've at least driven through all but Gallia.

Also in view: a trip arcing south of Columbus, through Madison, Pickaway, Fairfield, Hocking, Vinton, Fayette, Clinton and Highland counties; this would be a three-day trip, with a day just for Hocking Hills State Park, and would check off four new counties.

That would leave 21 counties, all on the far east side, which would probably call for three trips, each with a stayover. So that's the plan; but it could change!

Update, 12:45 pm:  I've already made plans for the next jaunt: this Sunday I'm heading south to take in a bunch of counties in the very south. Details being worked out.
Posted by Fr Martin Fox at 11:01 AM

Alas, as soon as I extended an invitation to Delaware, we went off to Texas and missed you! But you were just blocks from our house. If you ever come through again, I hope we'll run into each other. Happy Ohio trails!