How I spent Saint Patrick's Day in Rome...

This is a "back up" post, out of sequence. I didn't mean to omit this, but for some reason I did.

So, backing up to Monday. After having Holy Mass at Santa Maria Maggiore on Sunday, I headed to Saint John Lateran -- San Giovanni Laterano -- on Monday. Again, for various reasons, I was rather...tardy in getting out and about, so I had Holy Mass in the afternoon. In between scheduling a time for Mass, and the Mass itself, I had some time to visit; so I walked up the road a bit (a bit! hah!) to the Roman Forum.

This was "downtown Rome" in Caesar Augustus' time: 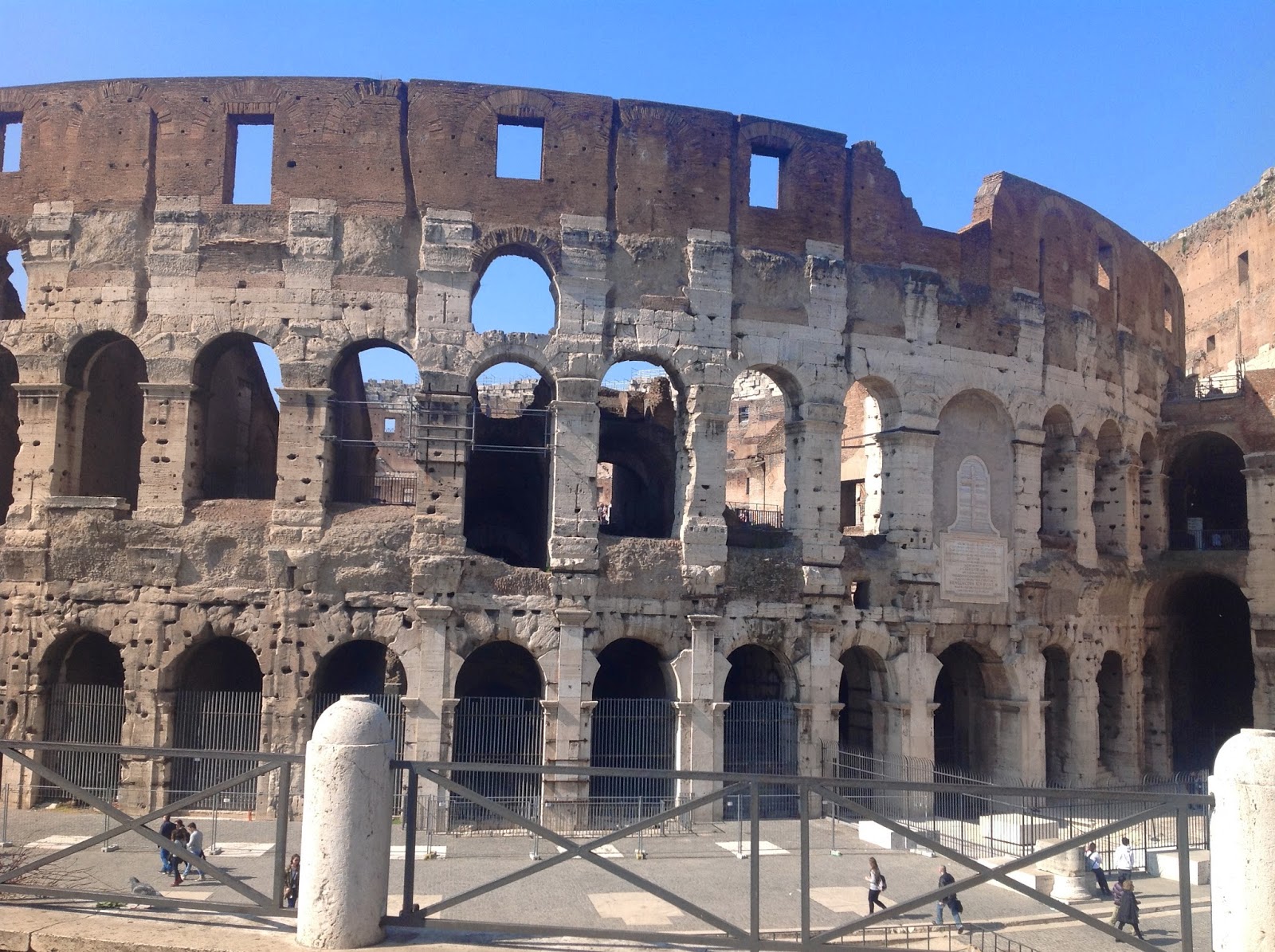 Here is the Arch of Constantine, obviously undergoing some restoration work. Yes, that Constantine. He had this built. It's still there. 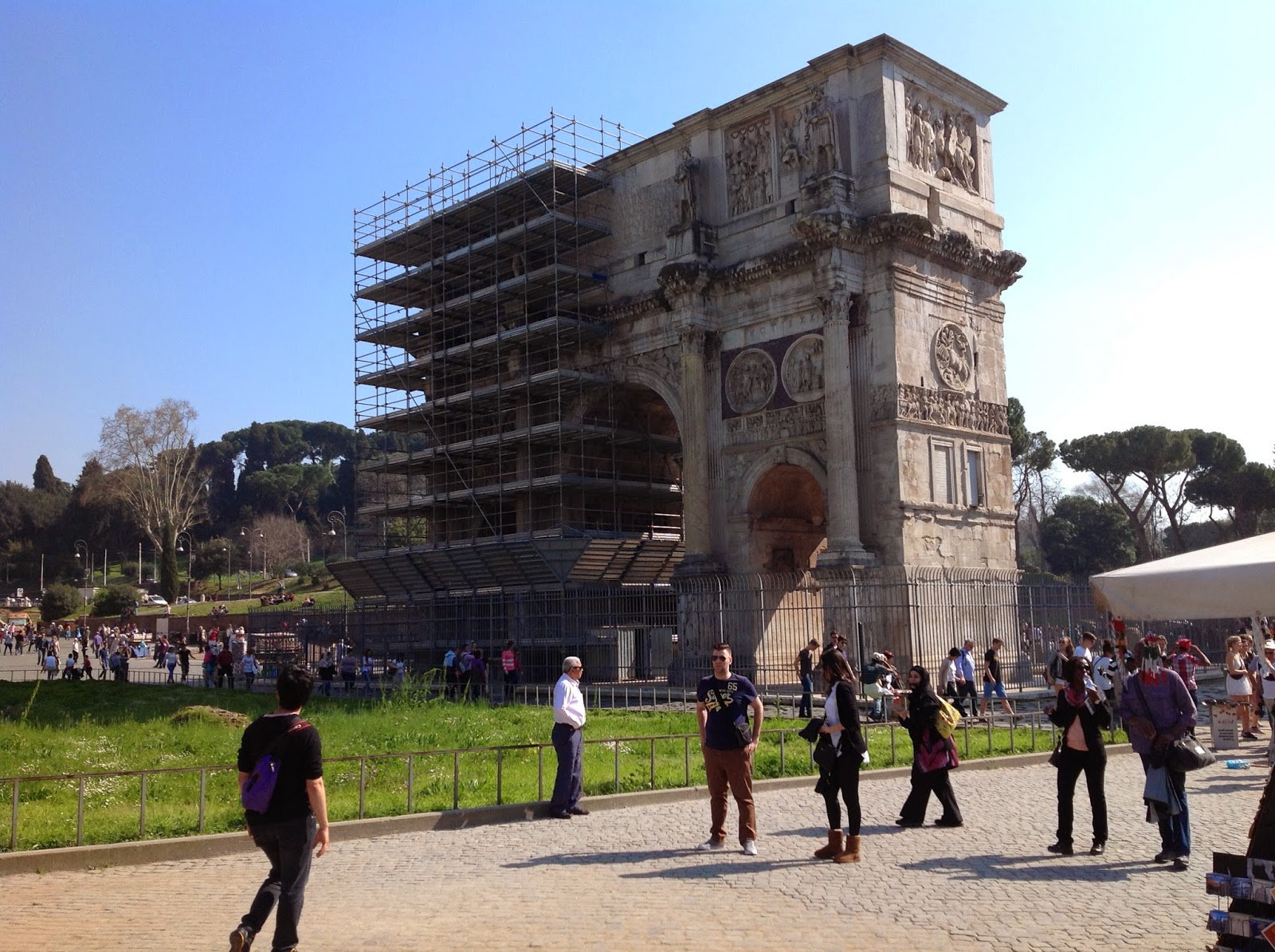 Here's a view down the Via Sacra to the Arch of Titus. 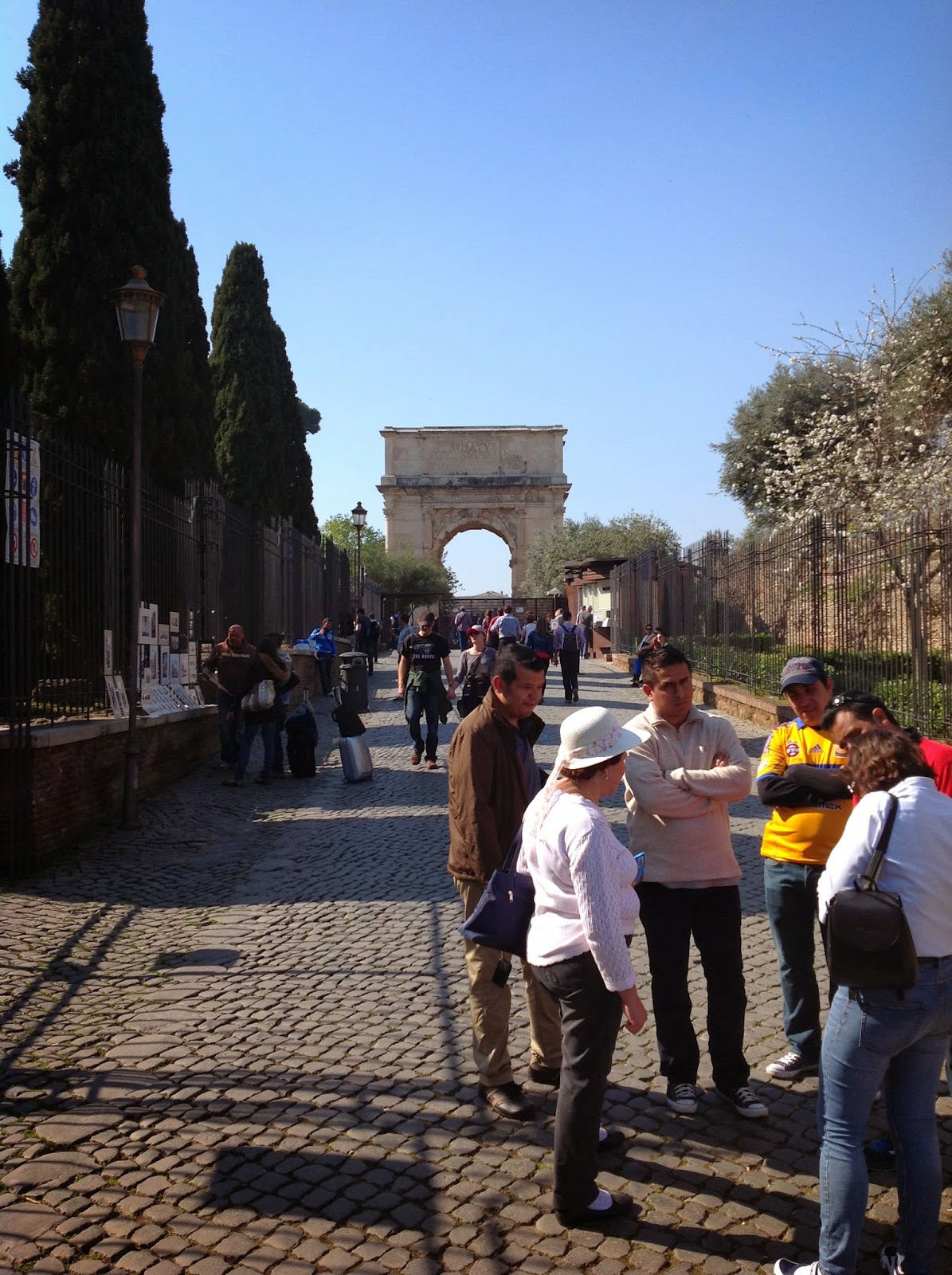 This was built to celebrate a great victory for Rome in AD 70. From this detail, can you guess what that victory was? 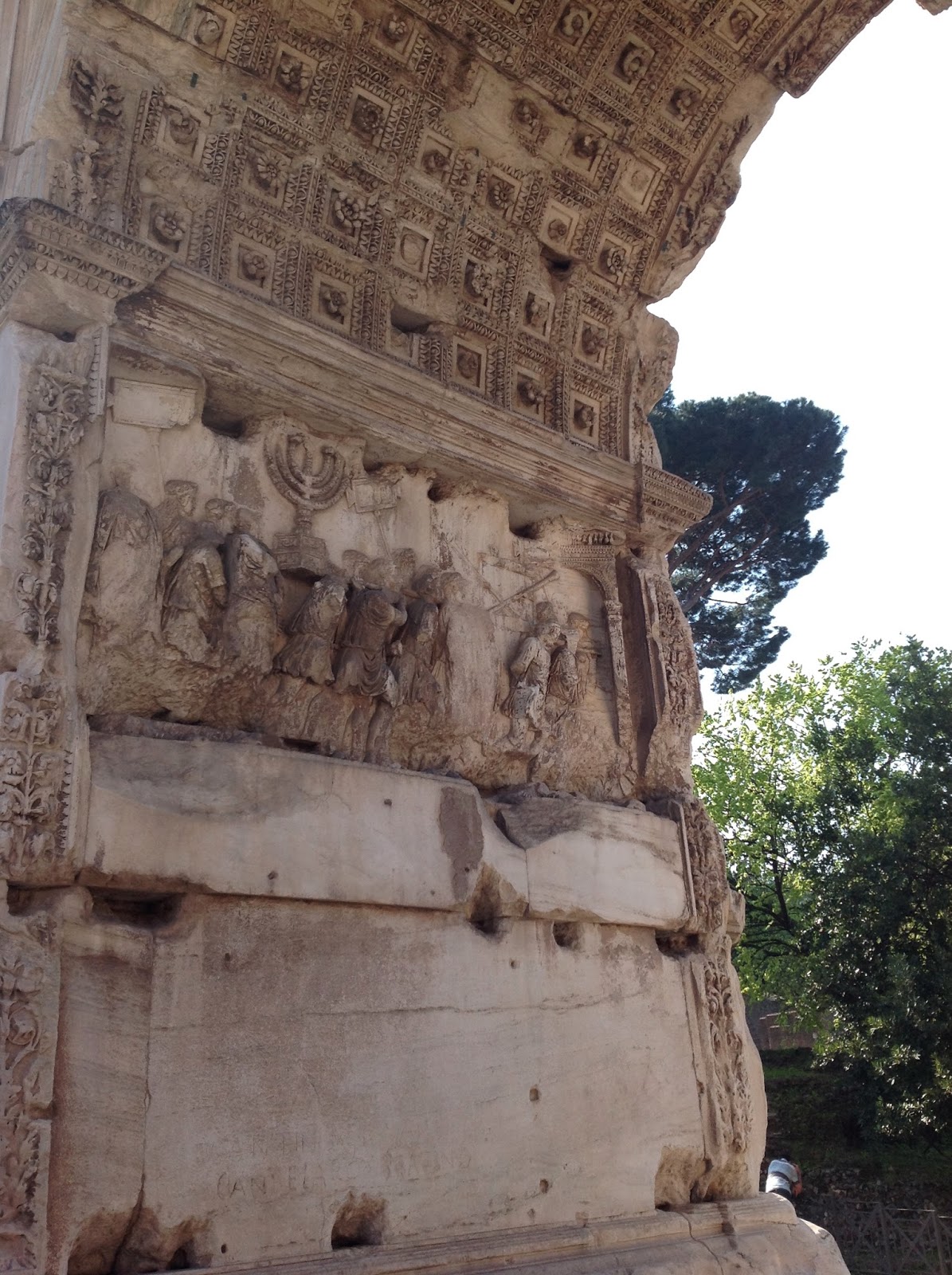 Here's a broader view of the forum. The much newer building you see, looming over all in the background, is the monument erected in Mussolini's time to King Victor Emmanuel to honor the unification of Italy. It's also the site of the tomb of the unknown.

On my first visit to Rome, around 2000, we were able to roam more freely over all this. Now the government has set up entrance and exit gates, and begun to charge admission -- which is the right thing to do. Even so, I liked the old way better. 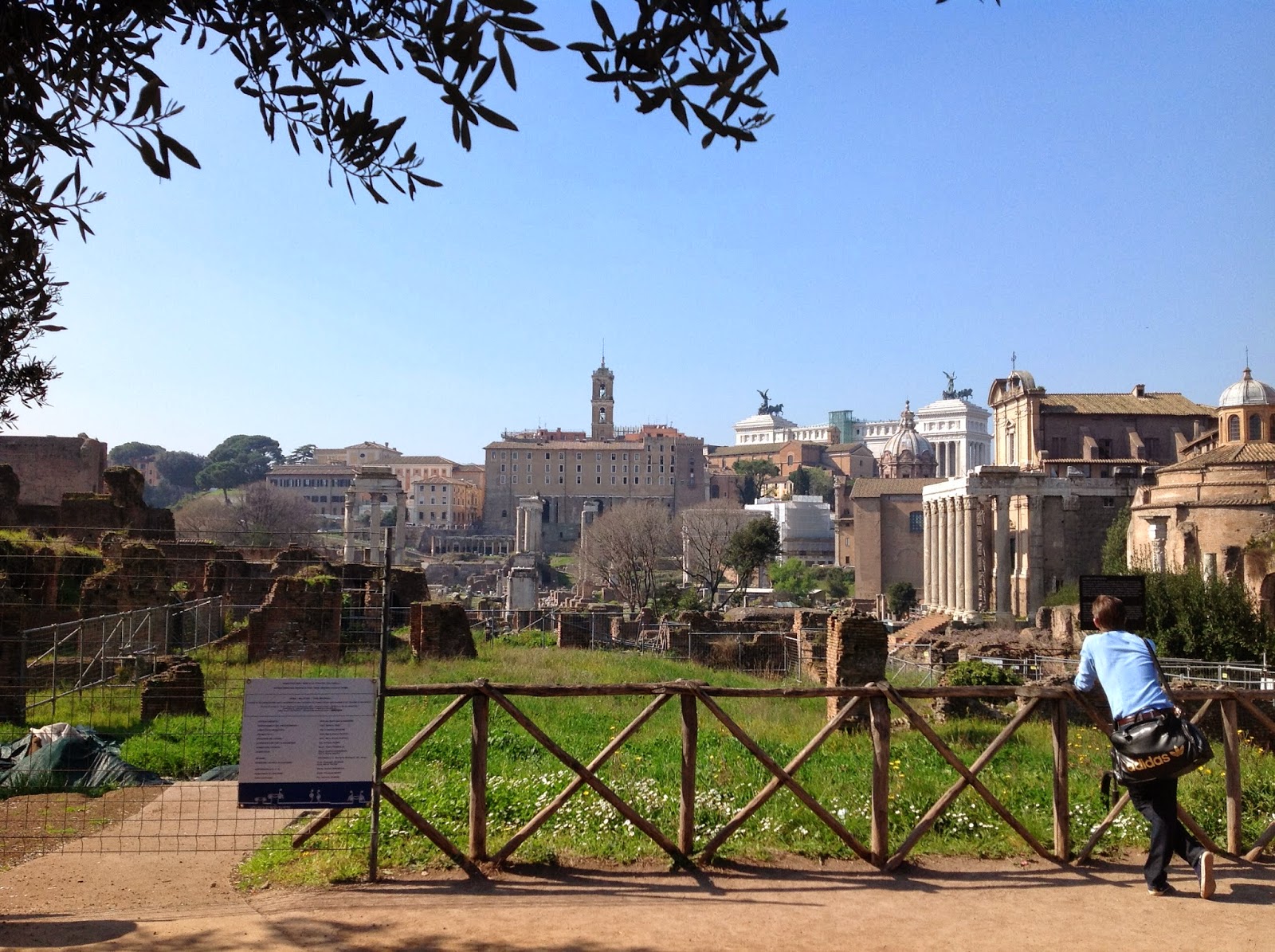 A number of interesting sites here are either being restored or are subject to further excavation -- so I wasn't able to get close, for example, to the Senate building (yes, the Senate), or the prison nearby that may have housed Peter, Paul or both. But here's an interesting site: 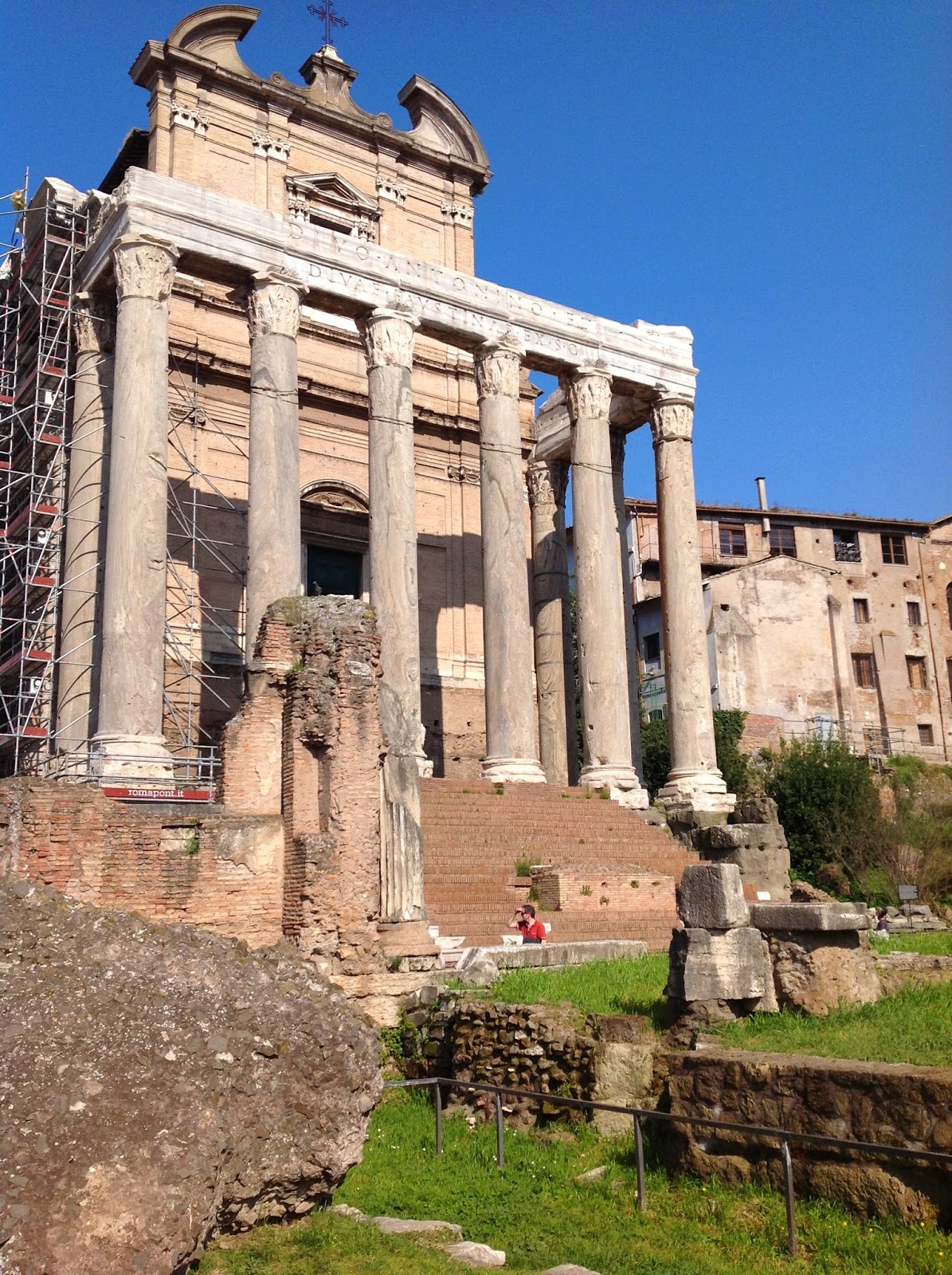 It's a Roman temple, inside of which a church was built. Do you see the block sort of arrangement at the lower end of the staircase? That's believed to be where Saint Lawrence was martyred. The church is named Saint Lawrence.

Well, I had a good time here -- although I really hate walking on the cobblestones -- but it was approaching time to return to Saint John Lateran for Holy Mass.

One of the things I always find so impressive about Saint John Lateran are the huge, astonishing images of the Apostles that line both sides of the nave. I took a few pictures.

Here's Saint James the elder. Yet notice how young he looks! 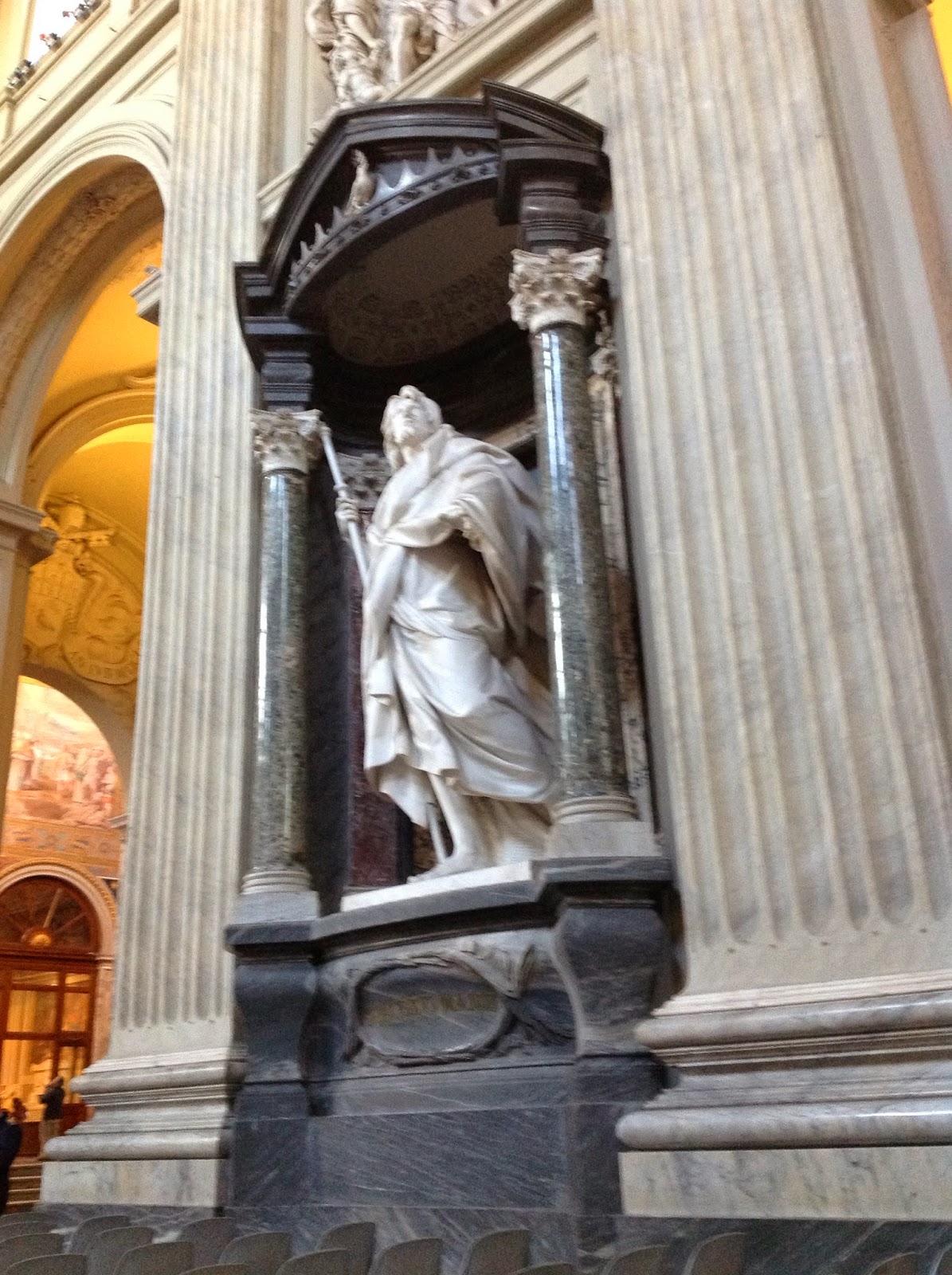 Here is Saint Matthew. The book in his hands symbolizes, I'm sure, his Gospel. But notice what his foot is resting on: 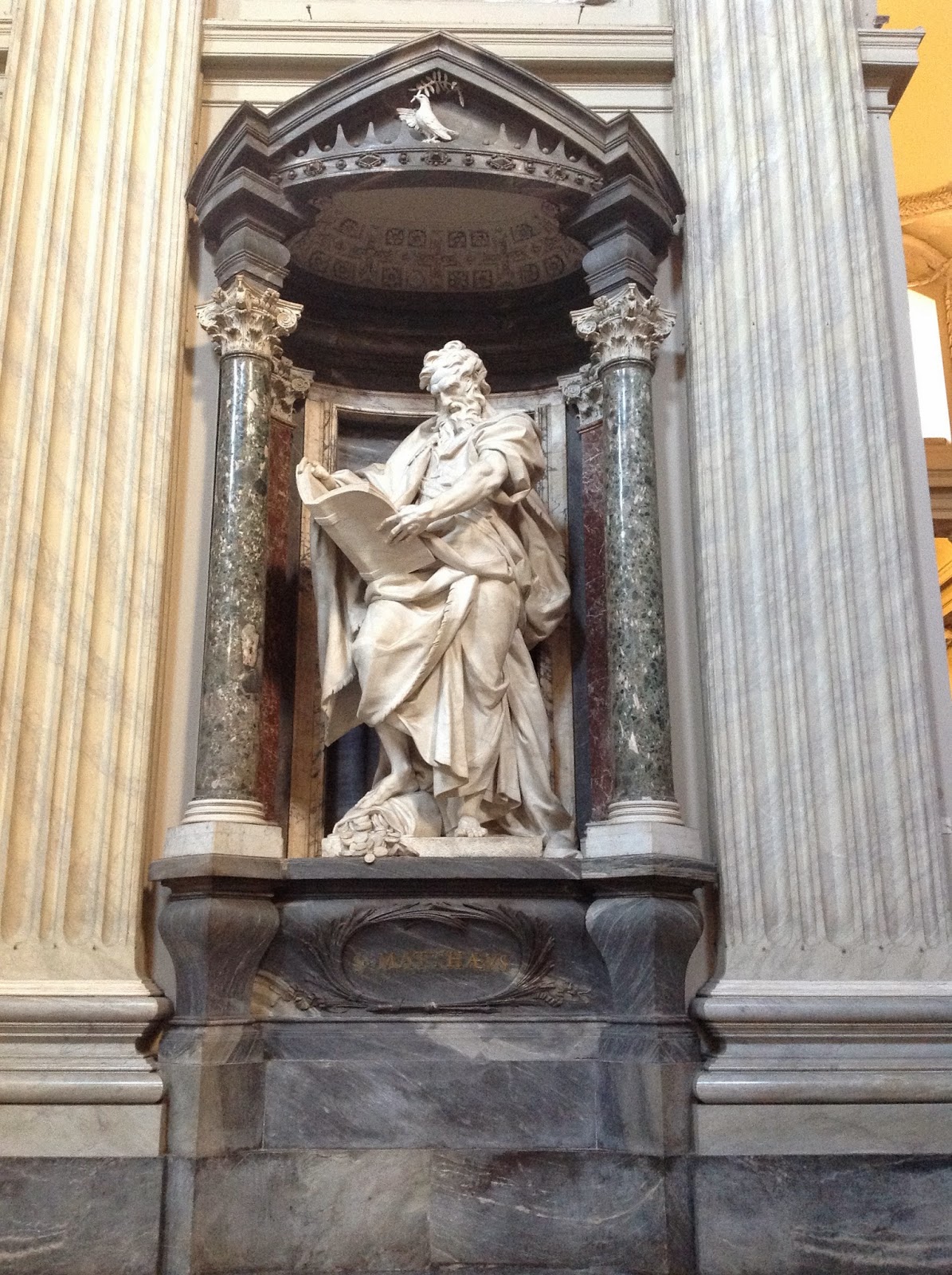 And here is Saint Bartholomew. Notice what he's holding. Do you know why? 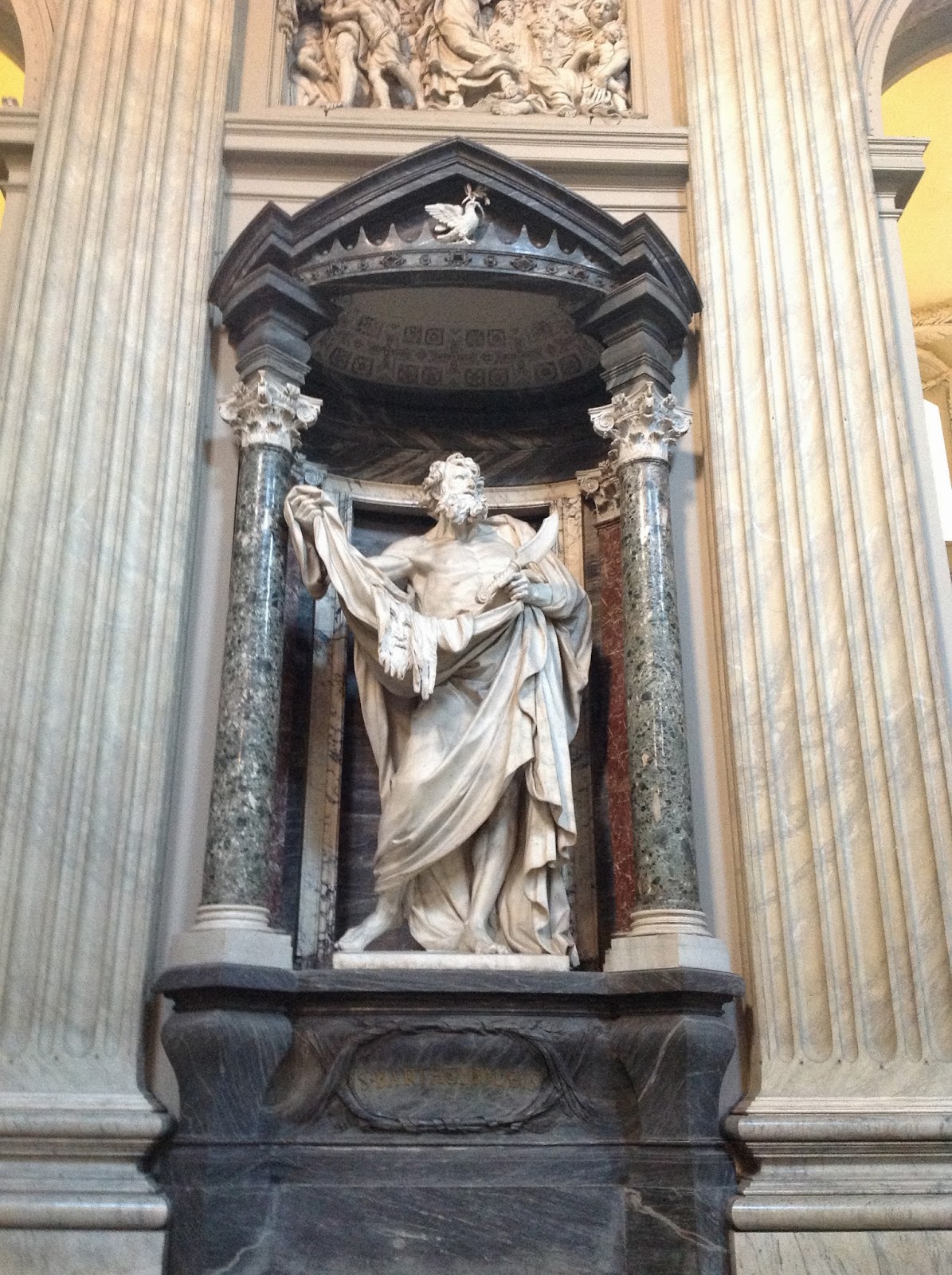 What is the foot resting on? I can't quite make it out...kindling?

And is that a shroud in the hands of St. Bartholomew?

It's better for the government to charge & be businesslike. But I prefer to not have to pay, also!

Matthew's foot is resting on a bag of money. Can you think why?

And Bartholomew is holding his own skin -- and a knife. Again, do you know why?

Saint Bartholomew was martyred by being skinned alive for his faith.

Exactly! I think these details in the artwork are fun.

Oh, there's so much to know! I'm realizing so many new things about Catholic history.

@Fr Fox: If you get a chance, take a train down to EUR and visit the scale model of ancient Rome. It gives you another perspective on the ruins.