Sorry to make you wait by the computer for another post; I was busy having fun in Malta.

Let's see what I can pull out of my picture file for you. I made the mistake of attempting some videos with my iPad. Why a mistake? Because they take a really long time to upload to my dropbox, so I can post them via my laptop (because writing these posts on my iPad isn't going to happen until I get one of those keyboards...and I don't need any more stuff to bring home from my sabbatical).

So anyway, what have I been up to this week?

Some random pictures. A consequence of a country being 96% Catholic? A wider choice in First Communion suits! Check these out... 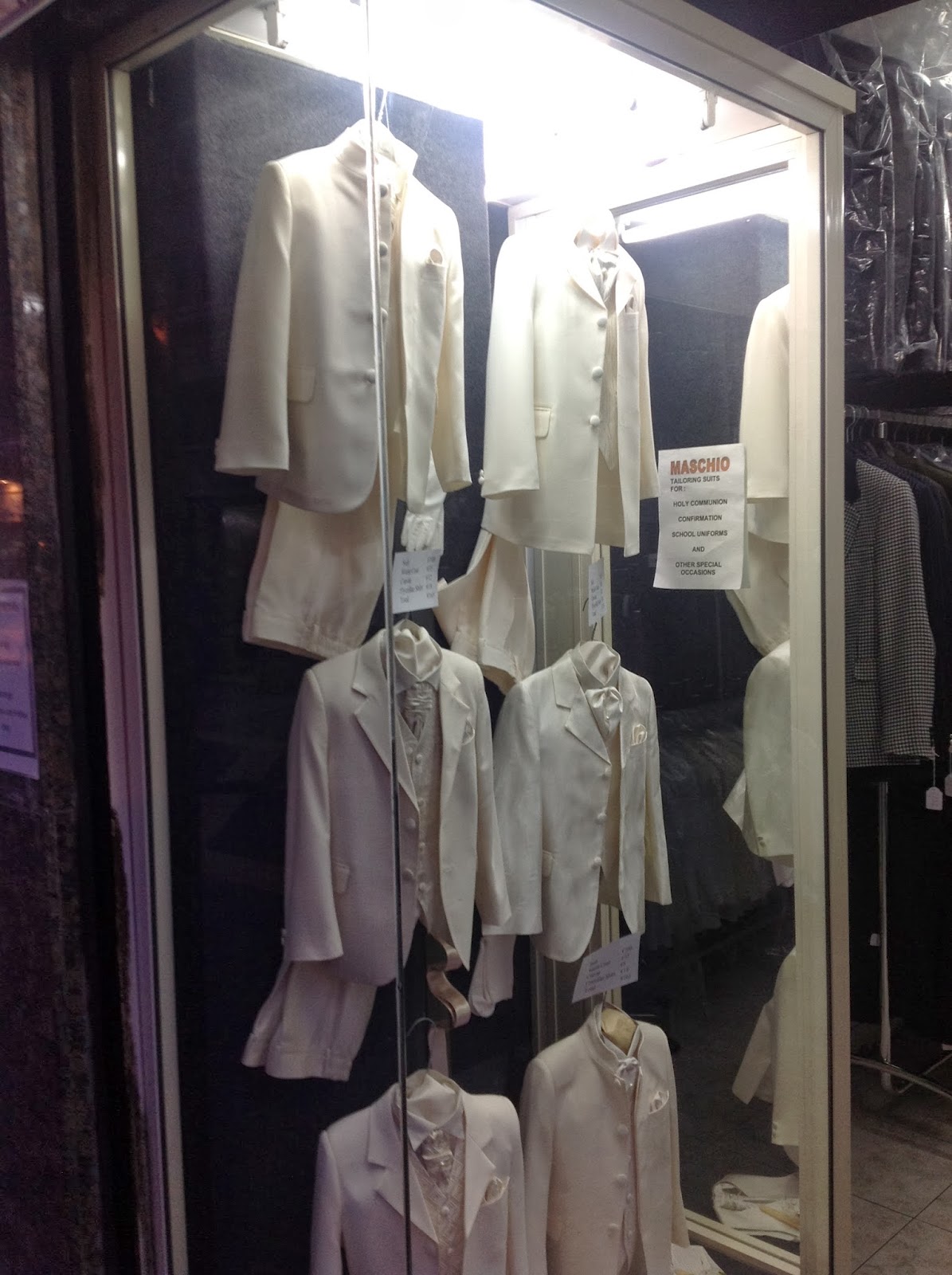 Also, the wedding dresses on display in a nearby store were all...can you believe it? Modest! (Sorry I didn't get a picture of that, but I'm not posting pictures of dresses on my blog. I'm just not.)

Another consequence of Malta being so Catholic is that it has lots of churches. Somewhere I saw a number of 365 -- one for every day of the year, and one for every thousand or so citizens. Here's one of them, which is notable for having a really large, unsupported dome (that is, other than the outside walls). According to you-know-who-apedia (worth every penny you pay for it), this is the third-largest such dome in Europe, and the ninth-largest anywhere in the entire universe!* 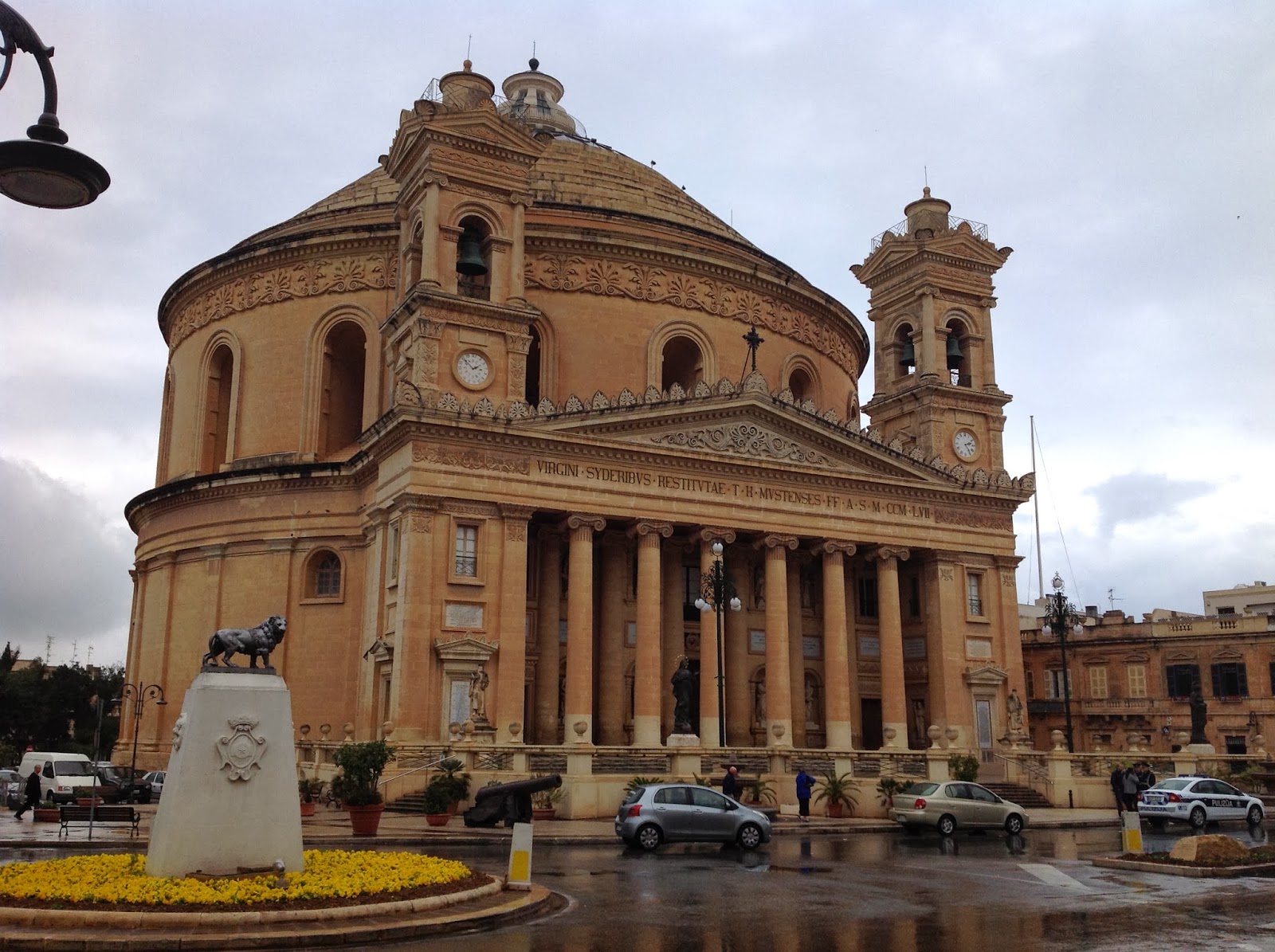 This is formally the Church of the Assumption of our Lady, but in Malta, the bus stop is "Mosta Dome." Here's the Wikipedia article. And here's an inside shot: 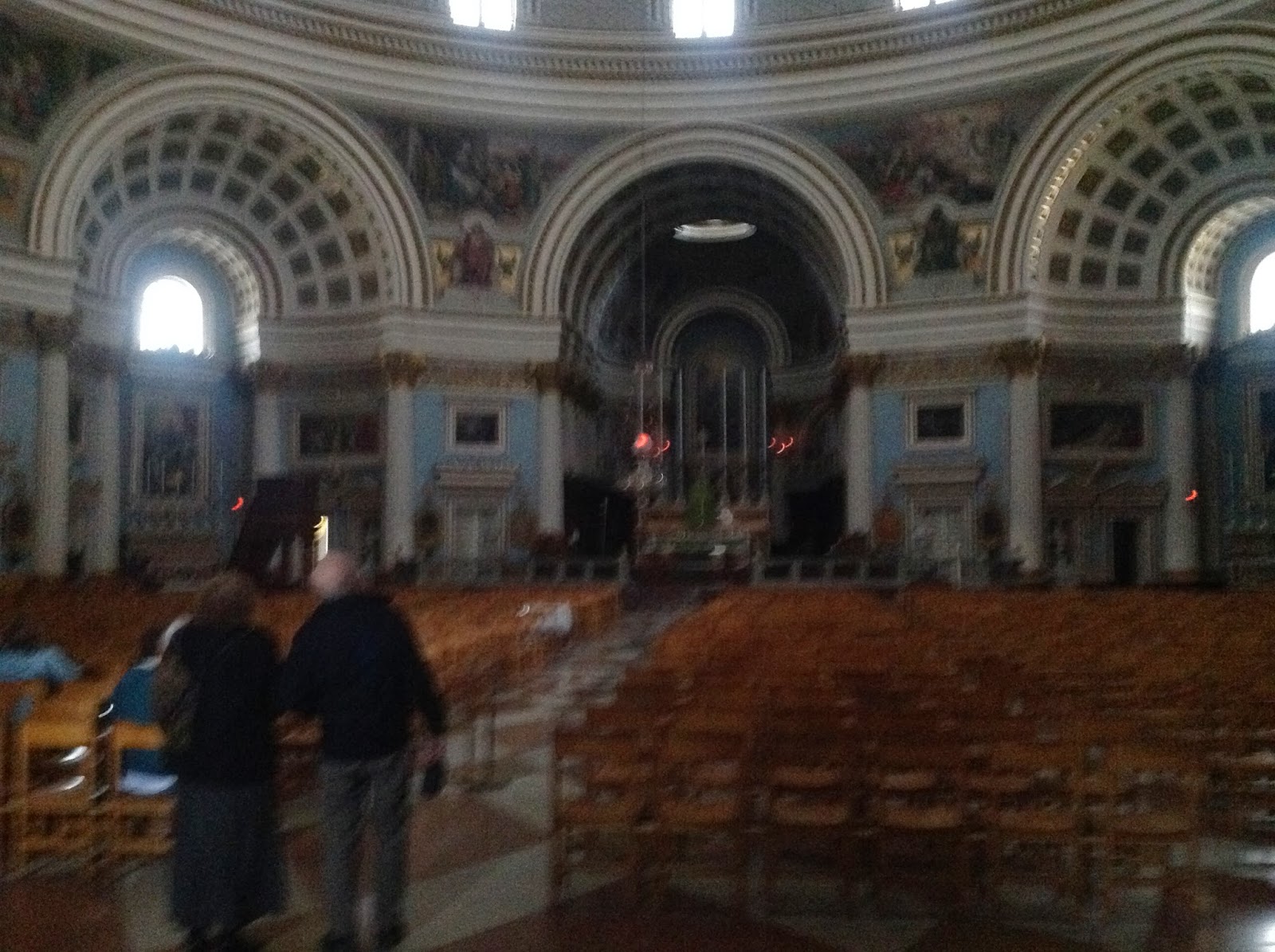 I'm sorry not to have a better shot of the altar, but a rope marked off the whole front half of the church from visitors, and it was really dark inside.

Now, just so you don't think my interests are all boring-architectural-historical, I do take note of practical things as well. Consider this very helpful vending machine in the lobby of my hotel. Look what they have: "hair putty"! "body lotion" (it's nourishing too!) and, best of all, for only three euros, "a spare pair." Fine print: "color and size may vary." A key detail there. 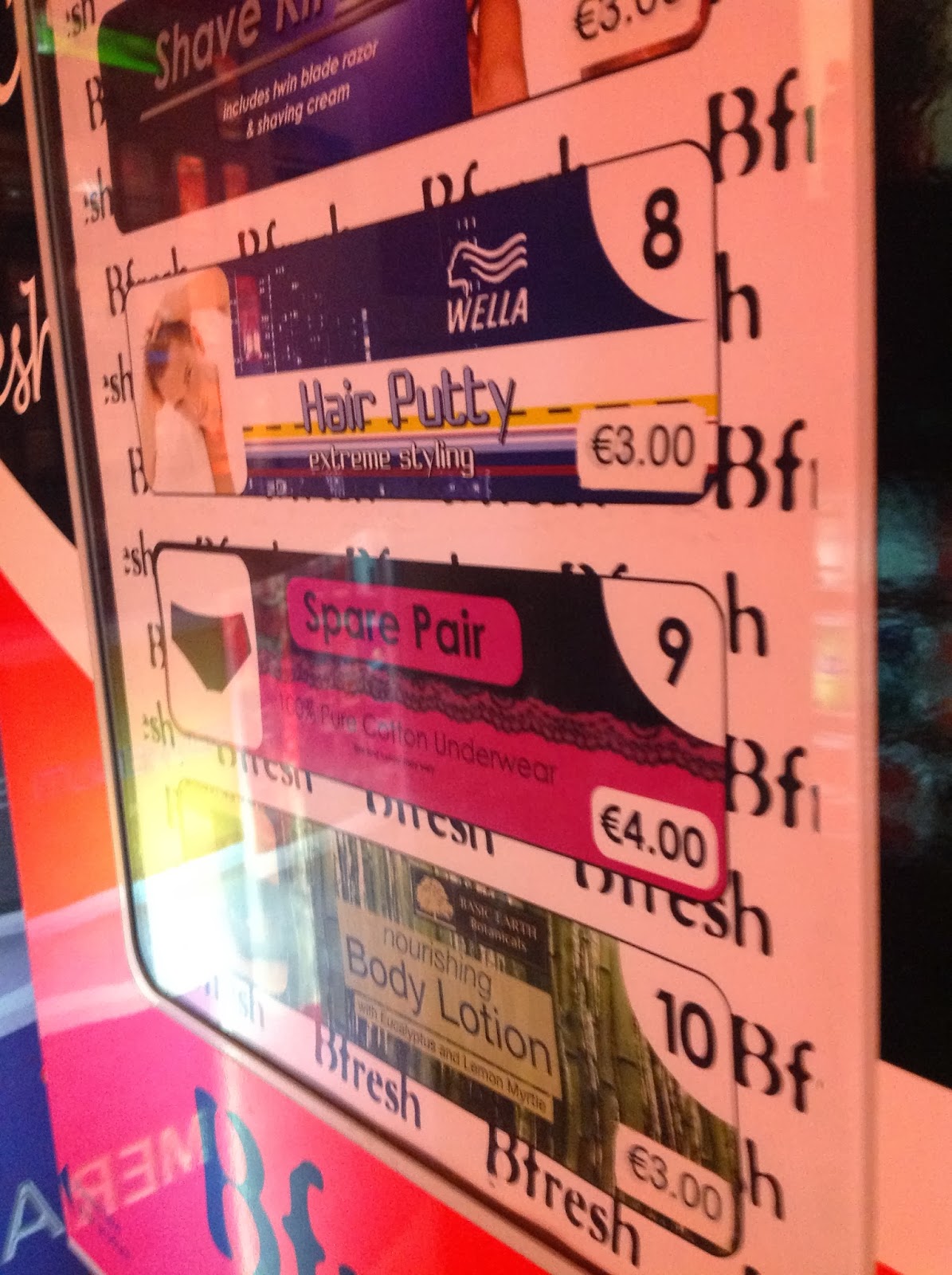 OK, back to the highbrow stuff. Did I mention Malta has a lot of churches? Later in the week, I made it back to the co-cathedral, and I spent a lot of time there. Unfortunately, the best stuff I couldn't take pictures of. They have two famous paintings by Michelangelo Merisi o Amerighi da Caravaggio: The Beheading of Saint John the Baptist, and Saint Jerome III (i.e., his third of Saint Jerome). Since I couldn't take pictures of them, I stole--er, found these online. (Just kidding; they're in the public domain.) This image dominates an oratory in the cathedral, which is now part of the museum: 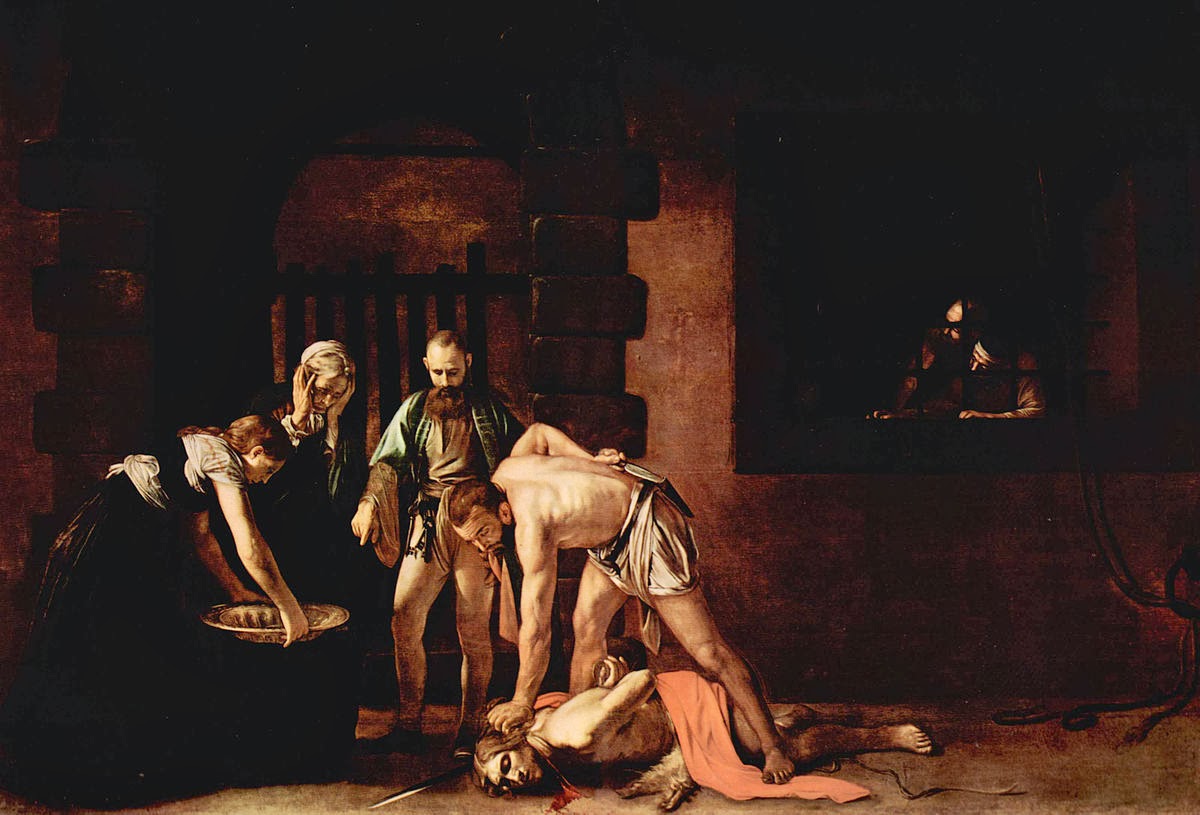 And here's the Saint Jerome painting which faces it: 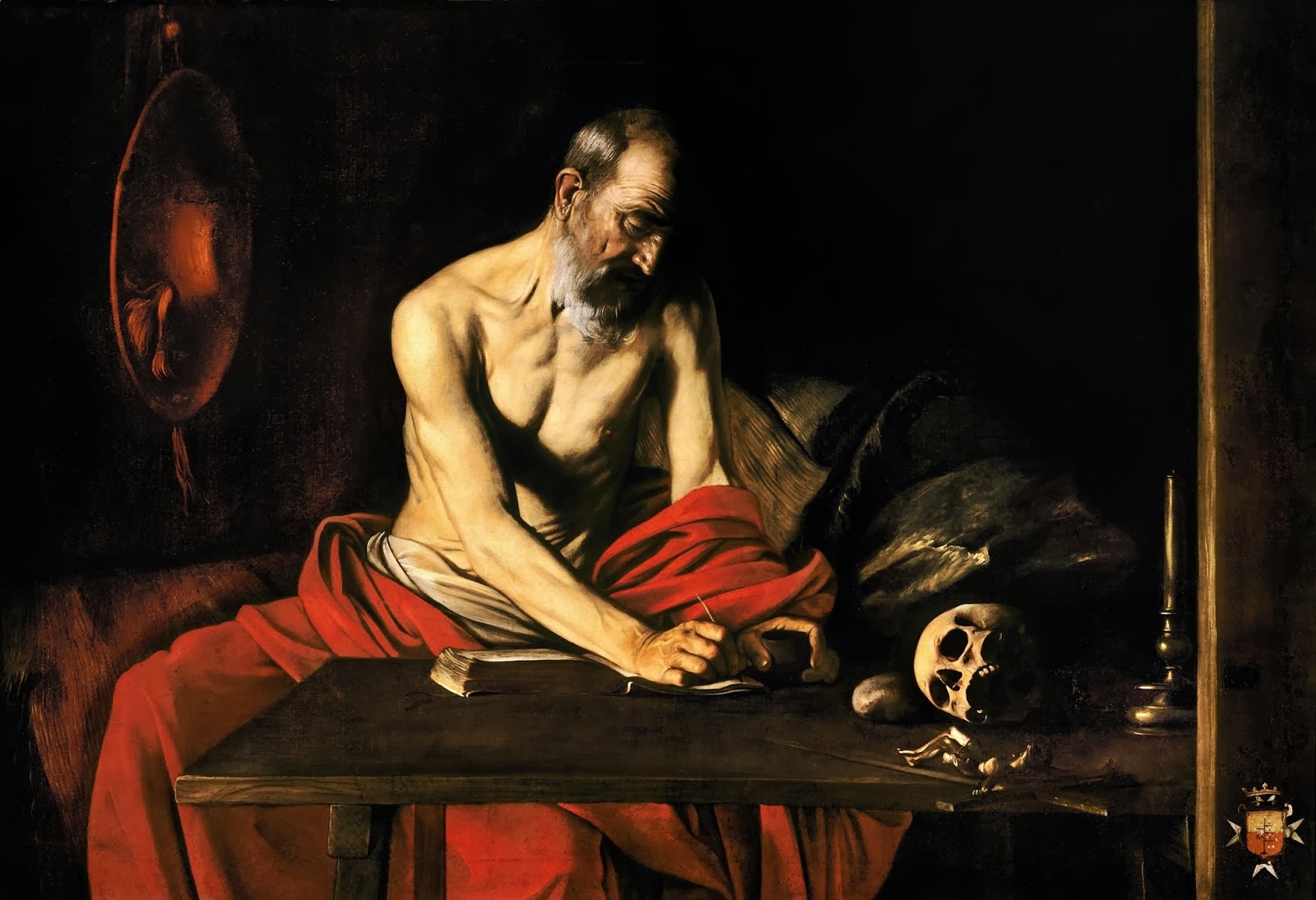 Now, here's a detail I may have forgotten to mention during my travels in the Holy Land. The place where what this picture depicts -- i.e., Saint Jerome, carrying out his Scripture studies at the end of his life? I was there! It's a cave in the same warren of caves in Bethlehem, where our Savior was born.

So take that, Father Z, with all your fancy pictures (with birds in them!) from museums in Detroit and New York City!

I took a bunch of other pictures from the co-cathedral, but dang it, the Wikipedia pictures are way better -- they're here. But knowing what sort of cynical people read my blog -- all two of you -- here are some that I took to prove I was actually there: 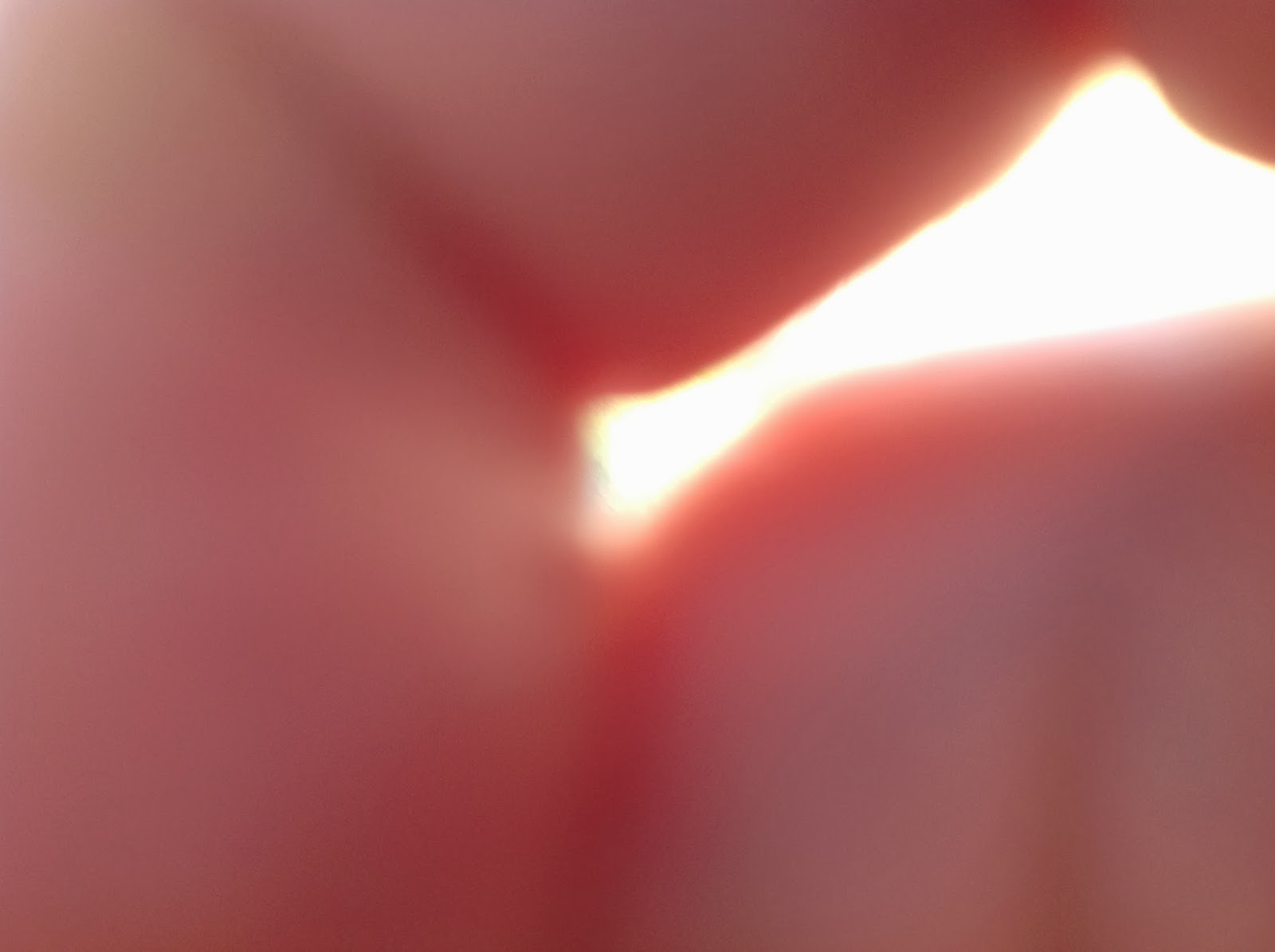 Haha, just kidding about that one. That was Turkey! OK, here we go... 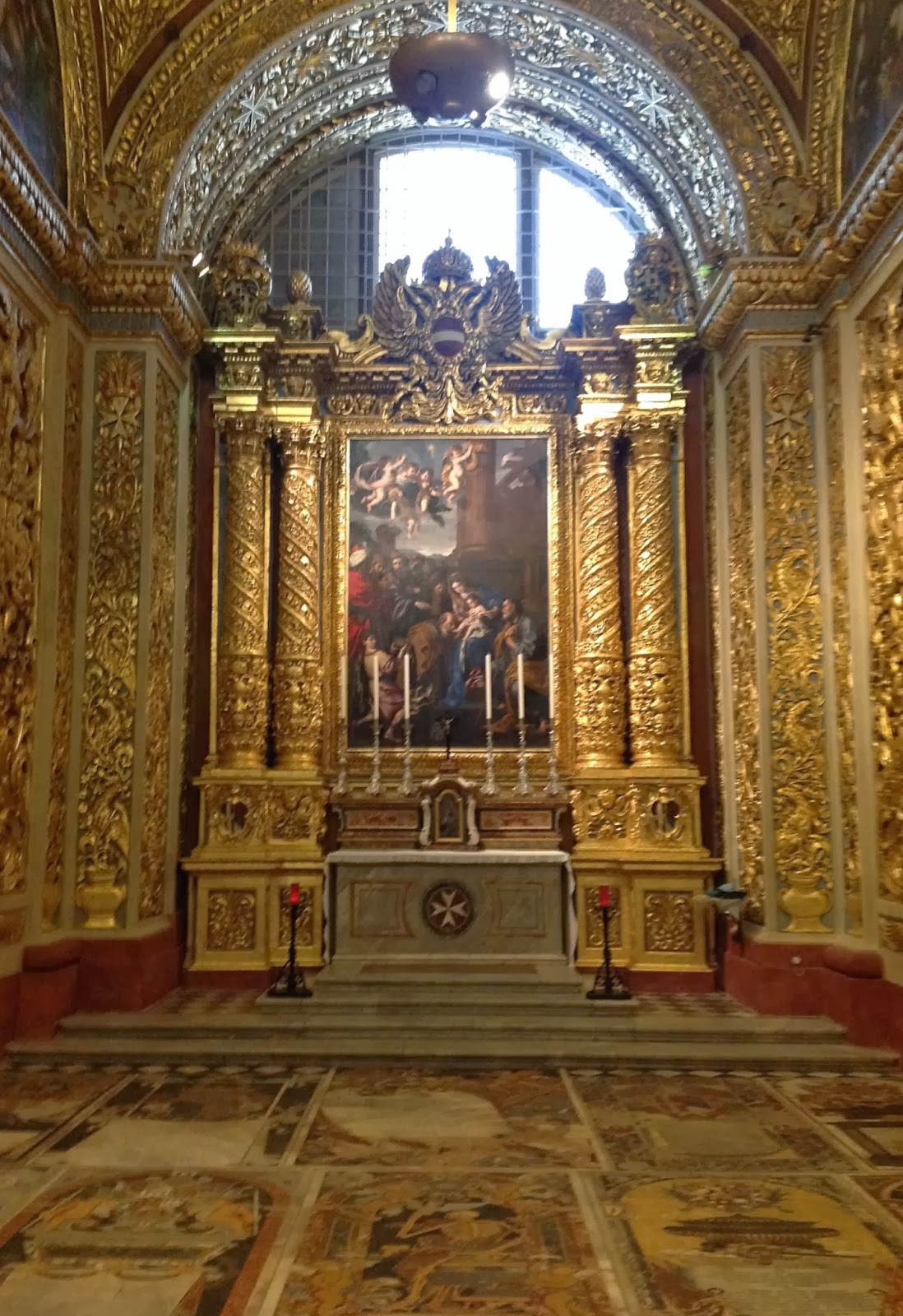 This is the "German Chapel. The ornate floor you see actually includes quite a few graves for many of the Knights of Malta. It's that way through the entire church. 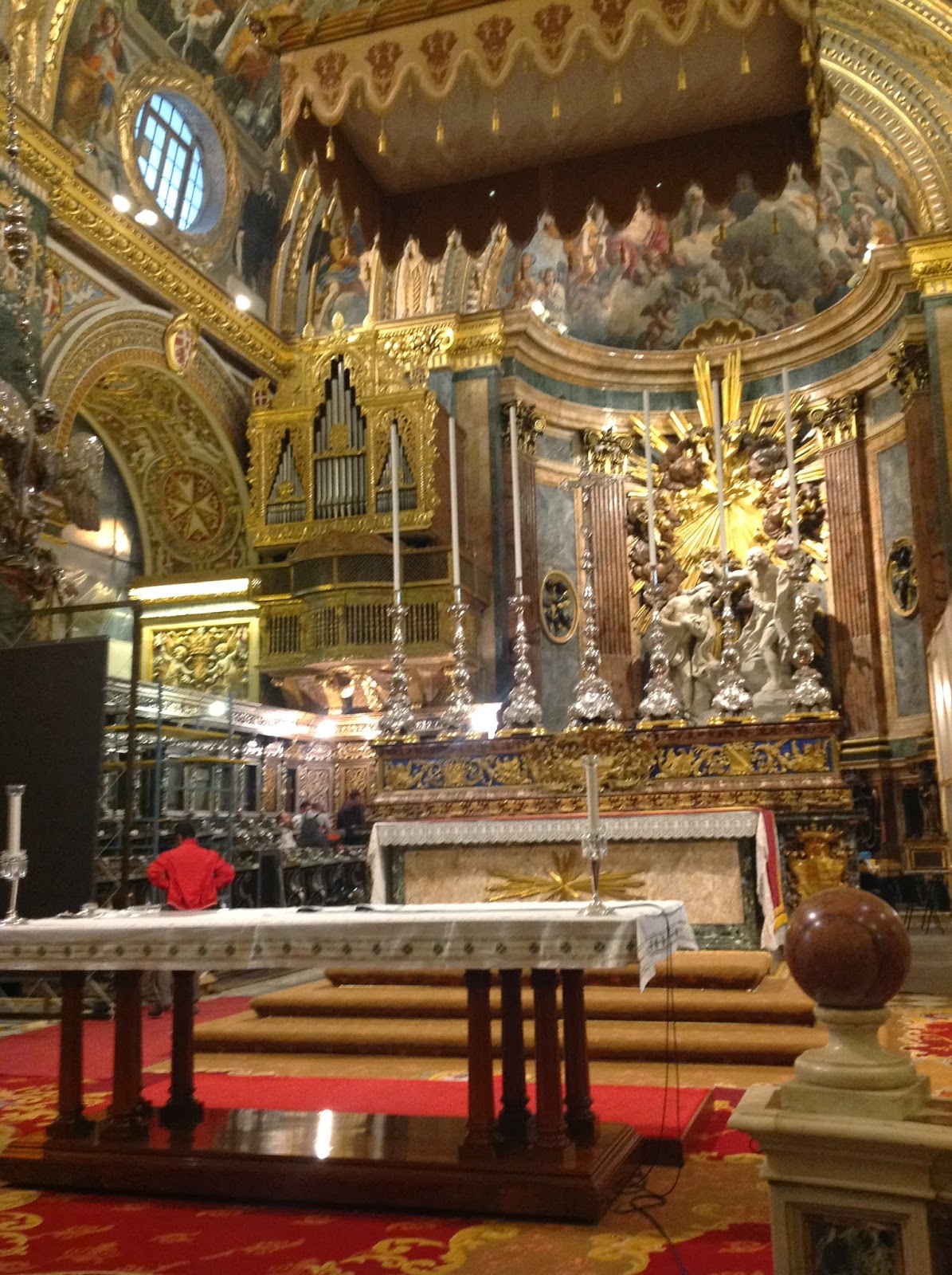 There are several things you might note in this picture of the sanctuary. First, can you make out the choir stalls ("choir" as in, the seats where the priests would have prayed the Liturgy of the Hours together) behind the high altar? From my vantage point -- admittedly (or, as the case may be, non-admittedly) from some distance -- that looks like silver. You make your own call. Second, if you wonder why that fellow in a red shirt is standing there, the cathedral seemed to be undergoing some restoration. And, third, am I the only one who thinks that new altar looks ridiculous there -- like a junior executive arriving at a white-tie event, wearing shorts and a golf shirt ("but they're really nice shorts...")?

Here's a shot of the pulpit. I think you could have a dinner party up there, it's so big. 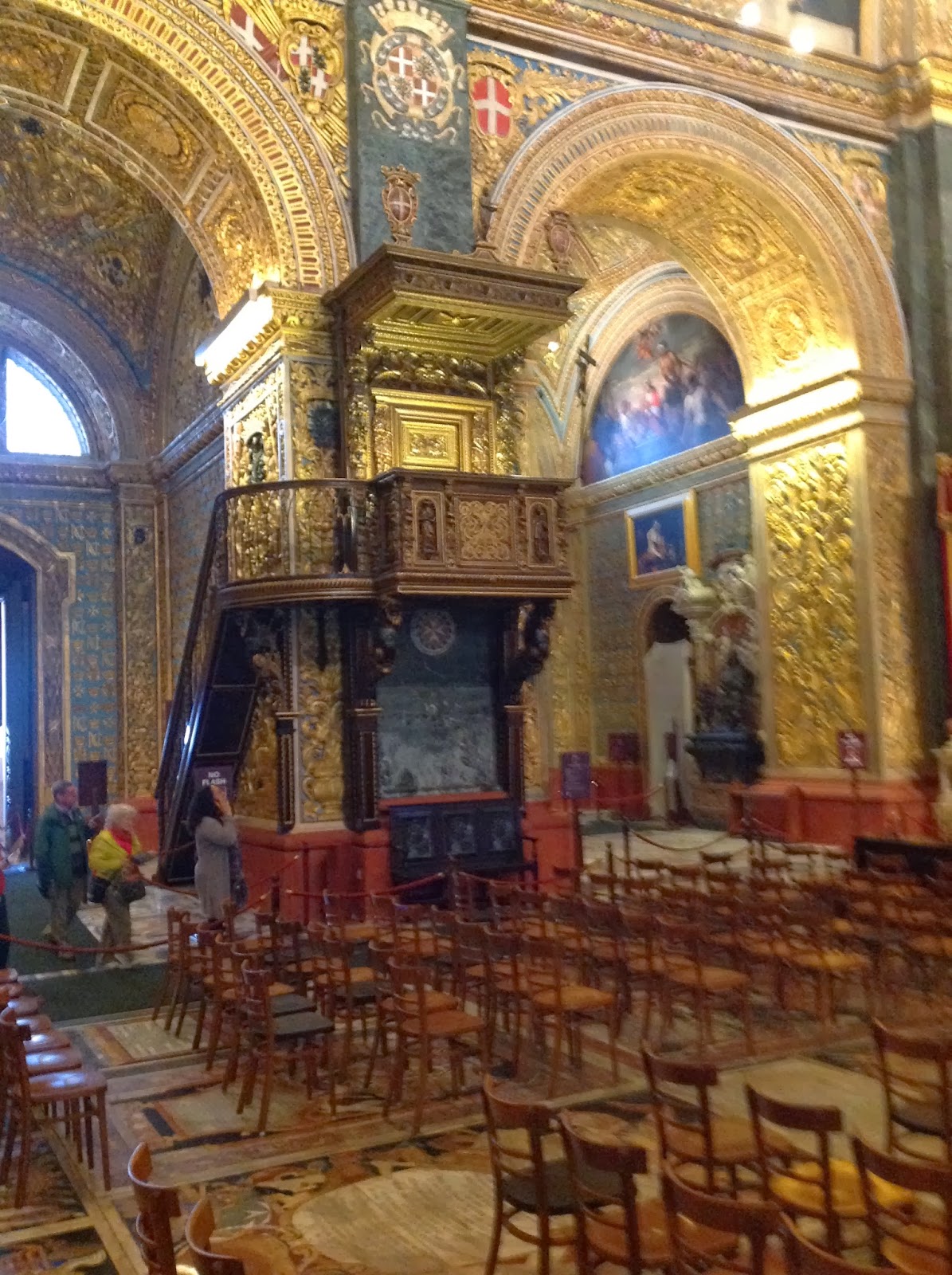 While Wikipedia (did you know I get a thousand dollars every time I mention them on my blog? It could be true!) has better pictures, they don't have a good shot of the artwork behind the high altar. Here's my best shot of it (cropped and blown up): 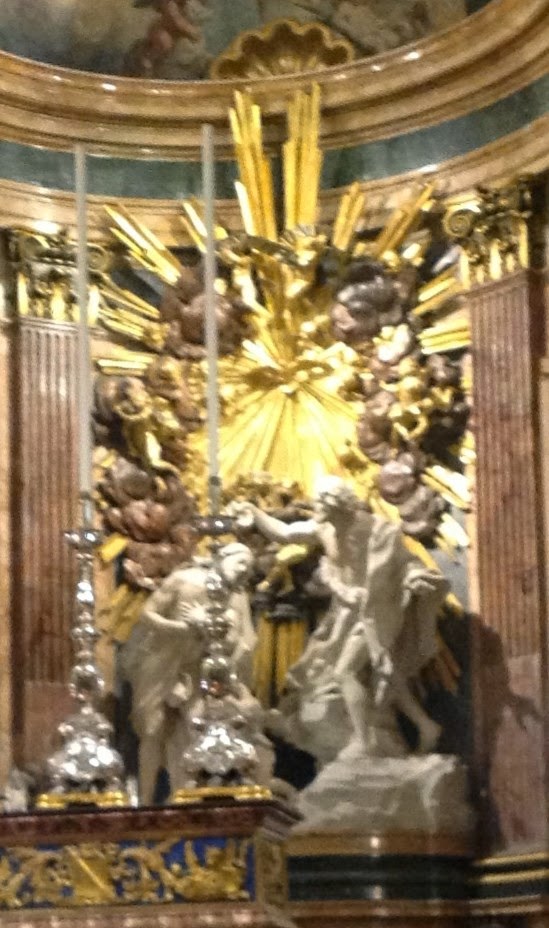 It is, of course, our Lord being baptized by John the Baptist. And it's pretty awesome, don't you think?

Well, that's enough goodness for now. When I come back, I hope to give you a flavor of Malta's Carnival, and with that, wrap up my visit to the "island fortress."

Modest dresses! Wow, I wish I could find more of those in Los Angeles.

Glad you are enjoying your vacation. :)

Thanks! However, this is...not a "vacation." This is a (drumroll)...sabbatical!

A vacation, I pay for; a sabbatical, the Archdiocese pays for!

Wait, I better dress that up...

A sabbatical is a period of rest and renewal, aiding a priest spiritually, mentally, physically and every other -ly. It can include study, reflection and other sorts of learning, without having to be a "program" or a graded course.

WHAT do you MEAN no dresses!! Come on Father - wedding dresses - they are connected to a sacrament!! Good poke at Fr. Z!!!

Glad you are having a wonderful sabbatical!!Love the posts!!

Thanks for the visit!