Mass for my parish in Rome -- and an indulgence too!

A little known opportunity for grace in visiting Rome is the plenary indulgences that are offered to those who visit the four patriarchal basilicae in the city: Saint Mary Major, Saint John Lateran, Saint Paul, and of course, Saint Peter.

The way it works is as follows.

The faithful do the action associated with the indulgence -- in this case, visiting one of the four basilicae mentioned. In addition, they go to confession -- anywhere, and some time close to the visit, not necessarily that day. And they receive holy communion, at the basilica. And they recite an Our Father and the Creed, and offer some other prayer for the intentions of the holy father. And -- this is important, but don't get scrupulous here -- the faithful are to be detached from all sin. That is satisfied by a good confession; but I mention it to emphasize the mindset that the Church is calling for here.

So, yesterday, I went to confession at Saint Peter. Today, I offered Holy Mass at Santa Maria Maggiore (more on that in a moment); Mass of course included the Creed and the Our Father, and the reception of holy communion. So -- if you'll pardon the casual language: one down, three to go!

This week, I'll have Mass at each of the basilicae.

So about the Mass.

My original plan was to try to get to the basilica for the noon Mass, in Latin, and see if I could concelebrate; otherwise, offer Holy Mass privately sometime in the afternoon.

Well, it didn't help that the fellows in the next room decided to be pretty noisy until the wee hours. I didn't care at 11; and was patient at midnight. Around one I was getting irked. When it got to 2 am, I said, quite loudly, "I can hear you." And that worked remarkably well! But I didn't get up as early as I wanted to.

Then, after I had walked part way to the subway station, I realized I'd forgotten my alb. There was a good chance they'd have one for me to use; however, I didn't want to give a grumpy sacristan a reason to say no, which sometimes happens. So I backtracked for my alb.

Well, I arrived at the basilica a few minutes after noon; and I wasn't terribly upset. Not only because I had a plan B, but that was really my preferred option anyway. So I checked in at the sacristy, and one of the Franciscan brothers marked me down for a 4 pm slot, at one of the side altars. This is really common in Rome. When it's a single priest, or a very small group, it's even less of a problem. Larger groups, of course, can require a little more effort, so they like you to reserve your slot ahead of time.

So now I had some time, and it was yet another gloriously beautiful day in Rome, so I decided to walk over to San Giovanni (Saint John), one of the basilica I wanted to have Mass at later in the week. Finding the sacristan around was chancy -- they tend to disappear for several hours in the afternoon -- but it was a lovely walk. I figured I could pray at the basilica, and get some pranzo (lunch) along the way, and take my time getting back to Saint Mary's for Holy Mass.

(I didn't get any pictures at Saint John Lateran, sorry -- but Holy Mass was underway when I got there.)

So the afternoon went; and I was back at Santa Maria Maggiore around 3 pm. I ducked into a side chapel to pray my evening prayer. (Yes, for you purists, that's a bit early. But there's no actual rubric here that specifies just when morning and evening prayer are to be offered; the Liturgy of the Hours is meant to be flexible. And the Church is practical. I learned long ago, as a parish priest, to pray my office when the opportunity arises; because one never knows what the rest of the day will bring. So there!) After that, I just spent some time reflecting and taking in the scene: 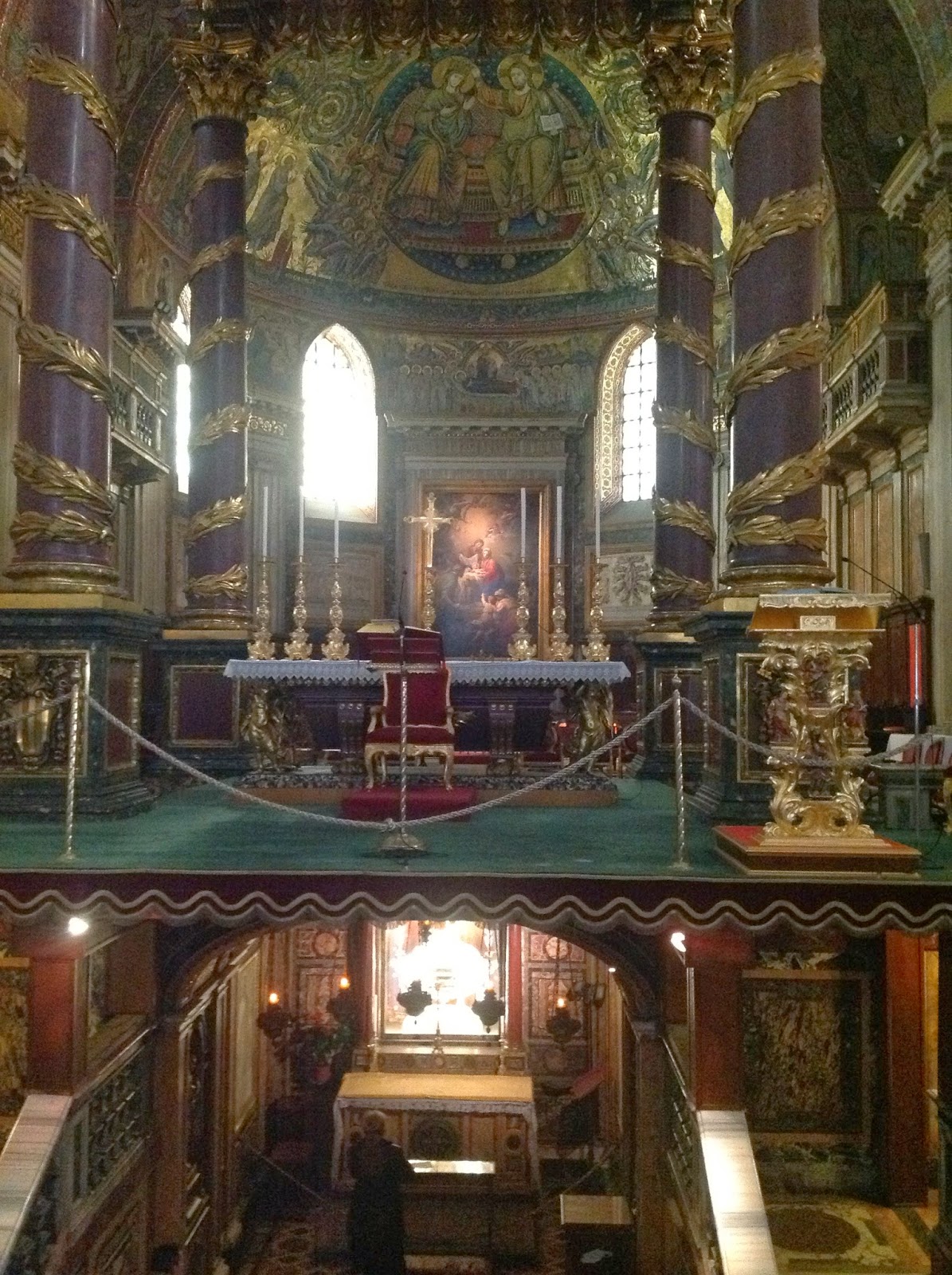 Here's a better view of the apse dome: 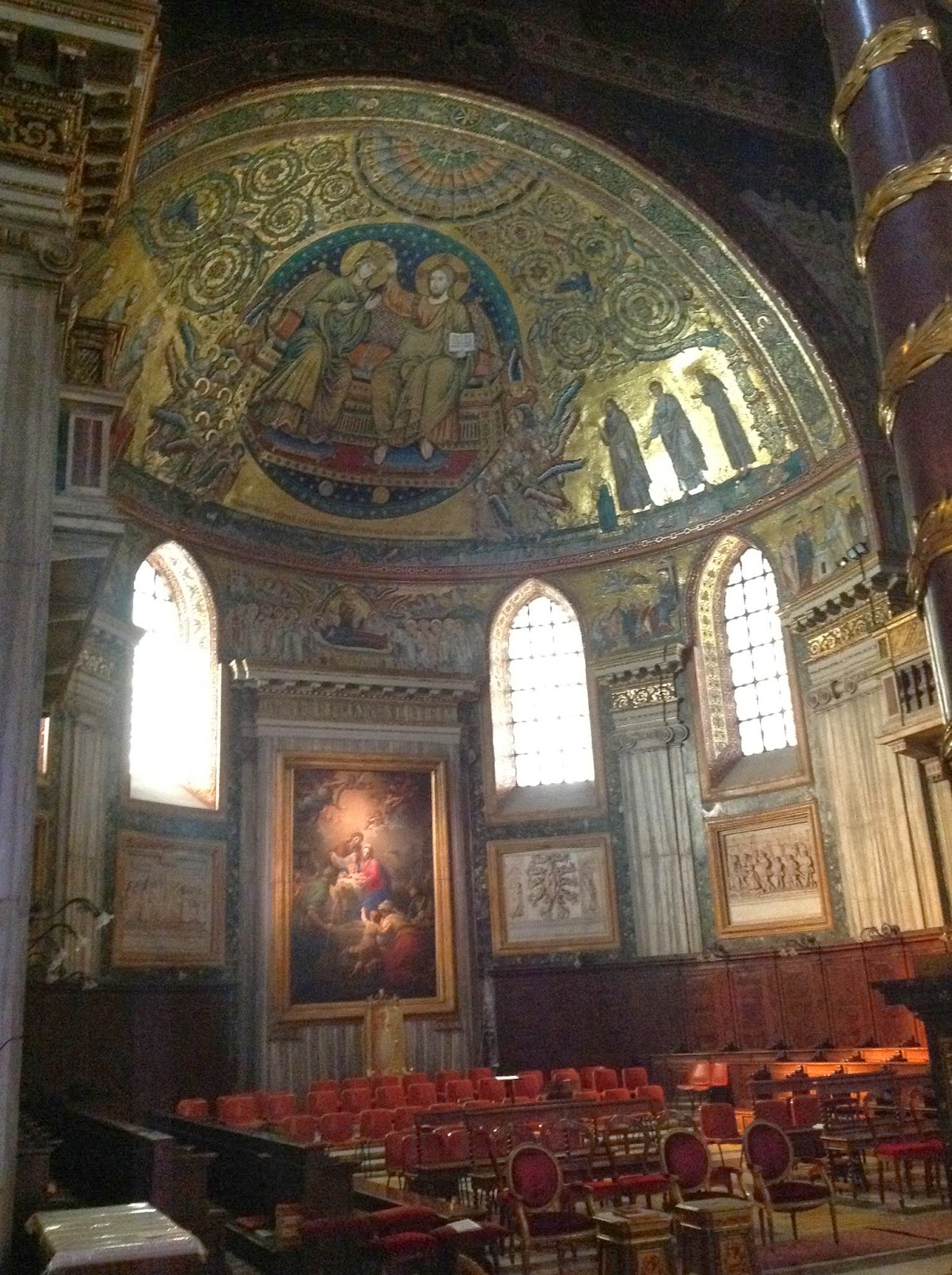 Around 3:45, I presented myself -- with my credentials -- at the sacristy. A chalice was ready for me, as was the Chapel of the Crucifixion: 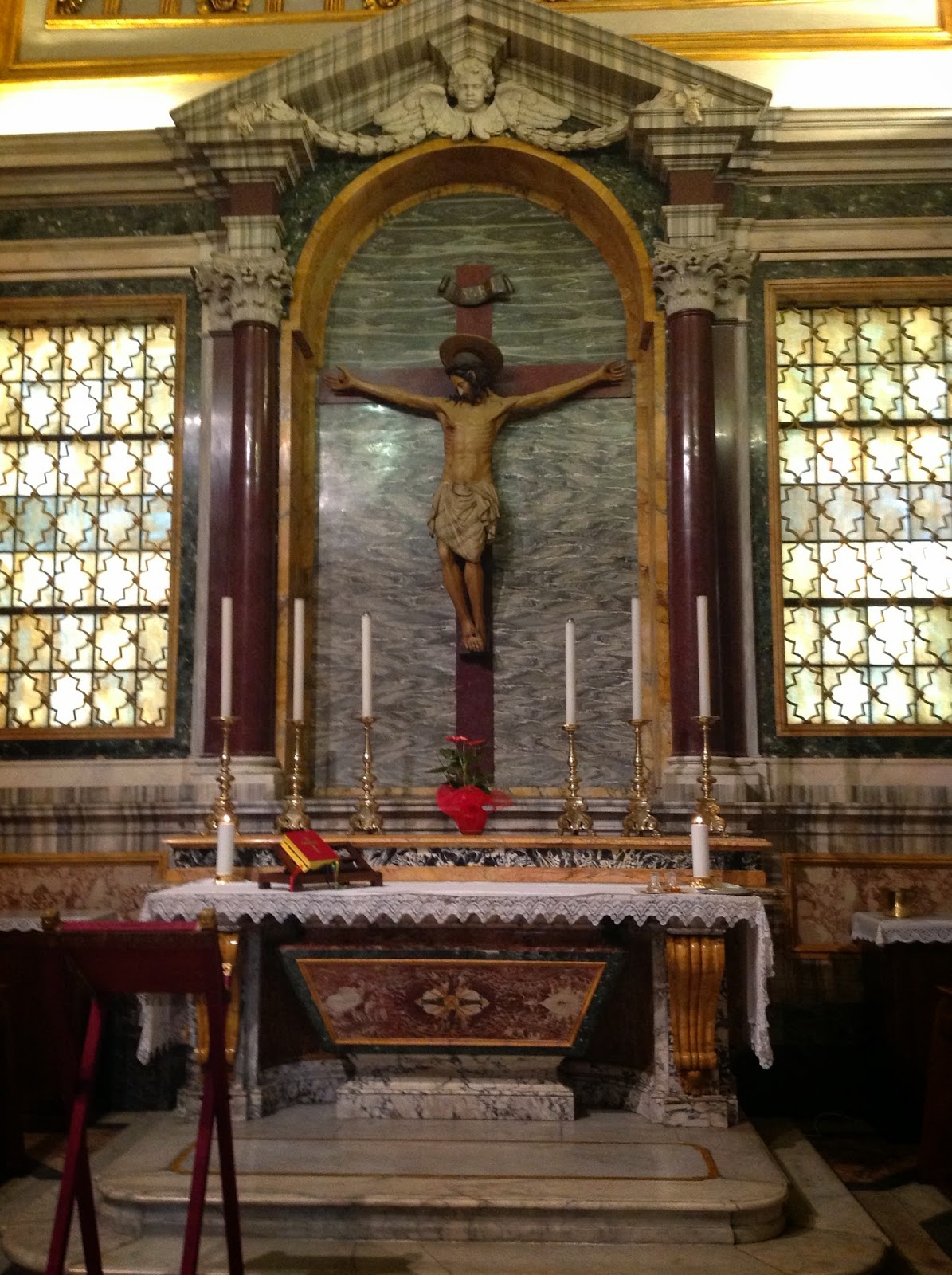 The Franciscan brother in the sacristy attempted to explain to me -- in Italian -- that I would have a congregation (of about three people); after he'd opened up the chapel and turned on the lights, I am sure what happened was that some curious people asked him, and he said, yes, there would be Holy Mass.

That was fine with me. So, vested for Mass, I went to the chapel. I offered it ad orientem as you can see. I read the readings in English; otherwise, the prayers were in Latin. I hadn't planned on a homily, but with a congregation, I was obliged to offer one! So I introduced myself, and ascertained, through head nods, that everyone was Italian, and that my congregation had very little English. So I explained, briefly, why I was having Mass there that afternoon. It didn't seem I was being understood, so I didn't see any reason to attempt anything more. I did attempt to explain that, on the other side of the basilica, a Ukrainian bishop was offering Mass -- so I wouldn't be offended if they'd rather have a bishop than a mere American priest! No takers -- but I'm not sure they followed my on that one anyway.

So on with Holy Mass; and when the time came to show the Lamb of God, now my congregation had doubled, maybe a little more! So I broke some of the hosts, and distributed holy communion. As it turned out, not everyone came forward.

After Mass, I chatted a little with the folks, and confirmed everyone was Italian; it turned out one lady was Filipino. A couple of folks ducked out, so I didn't speak with them.

One lovely thing was that, even though they were having difficulty with the Latin, they responded beautifully to the Sanctus, Pater Noster and Agnus Dei. I think if I'd chanted the Pater Noster, they'd have joined right in, as with the others.

After returning to the sacristy, I got this photo of the Ukrainian Divine Liturgy. You can see the bishop was much more popular! 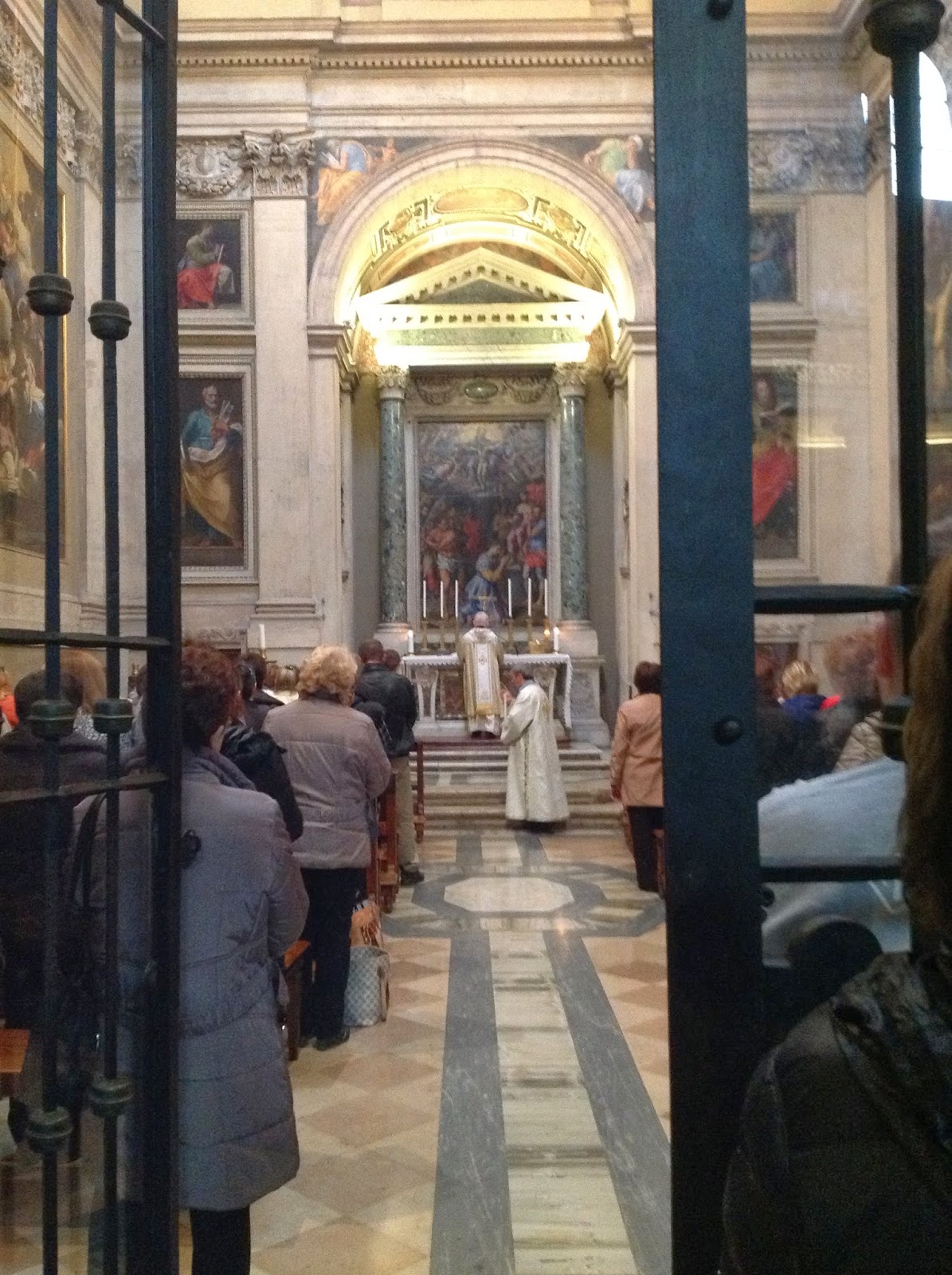 Oh, and a shout-out for my parish back home: I offered this Mass for the parish. How appropriate, then, that it was at a Church named for our Lady, in a Chapel dedicated to the Cross?

I enjoy your blog, particularly the pictures of churches.

I'm trying to get away from all the political discussion, to find things to read and contemplate that aren't focused on producing conflict and controversy.

Thanks for writing about something other than politics.