Sorry I've been tied up, all manner of things. I'm not sure anyone still reads this, but in case anyone wanders by, here goes.

In June, I went off to Rome for ten days with several other priests, we had a great time. We visited a bunch of sights--I can't say "all" of course--and we had Mass at many wonderful places, including with the Holy Father (along with about 10,000 other priests) in St. Peter Piazza.

A brother priest, along for the trip, snapped some pics; let's see if I can upload and caption them for you... 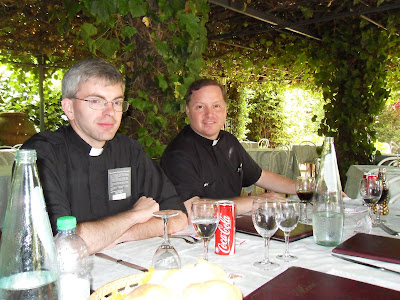 Newly ordained Father Tim Ralston and Father Barry Stechshulte at lunch with the whole group after having Mass in the catacombs. Father Ralston had the privilege of being celebrant; as he was newly ordained, we gave him his pick.

This was several days into our trip, and I realized I hadn't eaten much fruit or vegetables. So for the antipasto, I tried ordering fruit. The waiter looked at me with a mixture of horror and pity, but he did bring me a bowl with several pieces of fresh fruit. 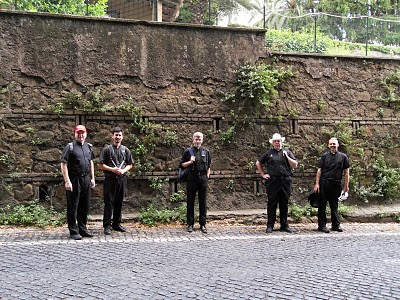 Here we are just outside the walls of the old city, on our way to--or from--the catacombs. From left: Fathers Stechschulte, Ryan Ruiz, Ralston--yours truly--and Father James Reutter. 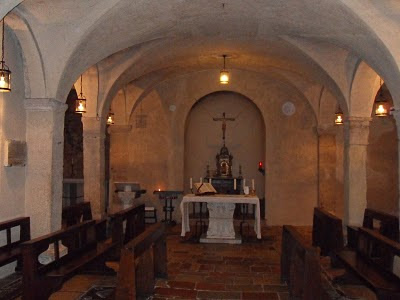 Here is the chapel down beneath the church and monastery in Norcia, the birthplace of Saints Scholastica and Benedict. Out of sight, to the left of this view, is an area identified as the actual site for the house where the saints were born. 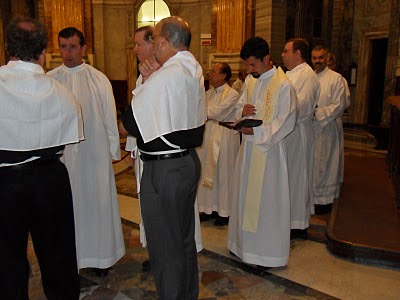 Vesting for Mass the sacristy of St. Peter's Basilica, around 7:15 am, before we had Mass on on the many side altars. There were many, many priests lined up to get their turn; we ended up with about nine or ten priests: a couple of friends of Father Stechshulte showed up, and another priest or two glommed onto our group, which was fine. I was the principal celebrant. 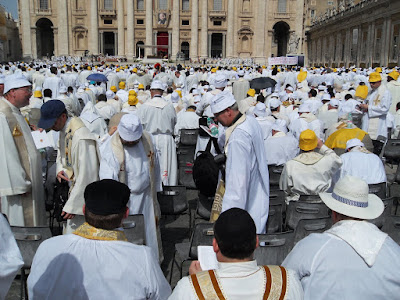 The Mass for the Solemnity of the Sacred Heart, concelebrated by ten-to-fifteen thousand priests, with Pope Benedict as the principal celebrant, of course. The three figures--backs to you--in the foreground are, from left, a priest-friend of Father Andrew Umberg, who is in the center, and me. The sun was extremely intense, the Mass--which began at 10 am (and we were in our seats before that)--lasted about 3 hours, and at several points I wondered if I'd have to walk over to one side in search of shade. I persevered, however, thanks to a hat I bought from a street vendor. I didn't like wearing a hat at all during Mass, but I did remove it during the canon. 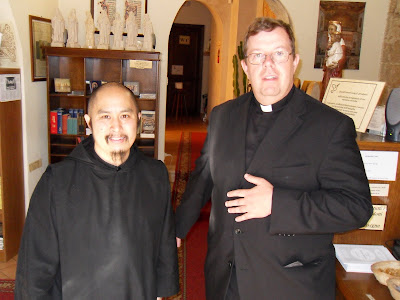 With Brother Michael, a son of Saint Boniface Parish, in Piqua, now a Benedictine brother in Norcia, the birthplace of Saints Benedict and Scholastica. Pray for Brother Michael, who plans for final--i.e., perpetual--vows in two years. If possible, I'll return for that. He is preparing for ordination as a deacon, and then a priest, after that. He would, however, remain in the monastic community, which he loves. 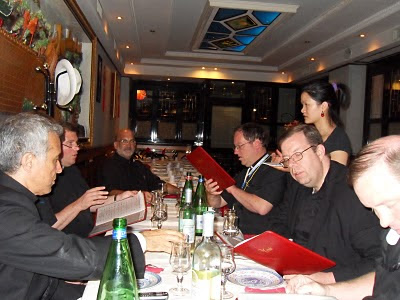 Here we are at dinner after the Holy Father led a Prayer Vigil for the Solemnity of the Sacred Heart. It began at 8:30 pm, and we foolishly imagined we'd be finished by 10 pm. In fact, we arrived here between 11:30 and midnight, and this Chinese restaurant kindly stayed open for us. One memory of that vigil for me will be the Holy Father leading us in Eucharistic adoration; many thousands, including me, knelt on the cobblestones (I used the booklet they gave us to cushion my knee), and the plaza was absolutely silent. It was one of those scenes you can easily imagine someone describing from the history of the great popes; only it happened in 2010 and we were there. 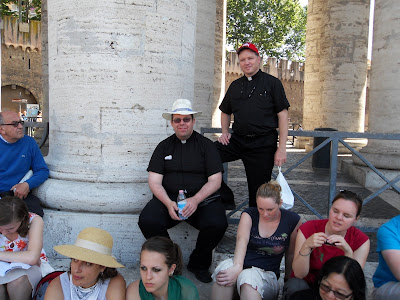 Here we are, along with other pilgrims, again in the Piazza of Saint Peter, waiting for the audience. Lots of folks rushed to take seats, so they got a good view; but those chairs were in the blazing sun. I didn't care about a good seat, but I stayed in the shade till the last minute.

As you can see, I only showed you pics with us in clerical attire. I confess that several of us did, occasionally, wear a golf shirt, as these were cooler. Our reasoning was that whenever the group went out, most of us were in clerical attire, so anyone needing a priest could easily identify one of us. There was one dinner where the waiter would say, going around the table, "padre...padre...padre..." and when he came to me--wearing a madras shirt--"Signore." At one point, one of the other priests said, "oh, he's a padre too"; no matter, he kept calling me "Signore."
Posted by Fr Martin Fox at 6:07 PM 8 comments: