I've made you wait long enough for pictures. A parishioner took these, and kindly shared his disk. The pictures really don't do justice to the project, especially as you cannot see the before and after. But here you are... 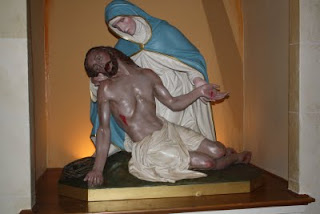 This is one of two niches in the back of church; the other is Saint Anthony of Padua. Both these statues were beat up and needed some attention. A volunteer cleaned them and repainted them at no charge. The artist hired to repaint the church added the shadow of the cross on the wall behind this statue--you can see just a bit of it in the background. If you're wondering where the votive lights are, they're in front of St. Anthony; this statue is so large, there's not room in front of it for candles. 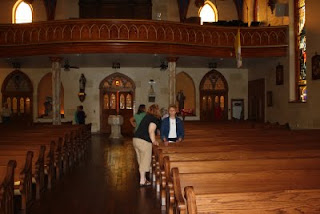 Here's a nice view of the back of church, as well as the new wood floor and the new pews (as well as some parishioners after Mass). The whole floor of the nave was replaced; we removed carpeting and put down a new, stiffer sub-floor, and then hand-scraped hickory planks as you see. The floor has a bit of texture, so it's not too slippery; it has a super-hard finish we expect to last for decades before any refinishing; and the acoustics are much improved. The pews are very close to the original--and, yes, they have kneelers.

The balcony that you see is not exposed wood, as it appears. That was the work of the artist, recreating wood. I don't believe the balcony was actually a good quality wood, so stripping it wouldn't have worked.

The statues you can't quite see on the back wall are St. Louis on your left, and the Infant of Praque on the right. 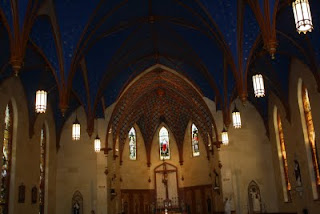 Here's a reasonably good view of part of the ceiling. It was all white, with blue ribs; now it's blue, with gold stars, and the ribs are made to look like finished wood. The whole ceiling is actually metal. 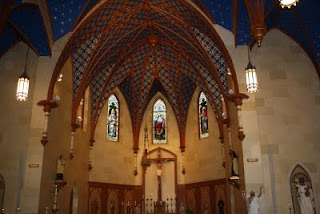 Here's a nice view of the apse ceiling, but you can't really see the detail. This, too, is all tin, and the crosses are pressed into the tin. The ceiling was stripped of all paint, primed, painted a rich blue, and then each of the crosses was painted in gold. You also get a good look at the walls, which were painted to look like sandstone blocks. 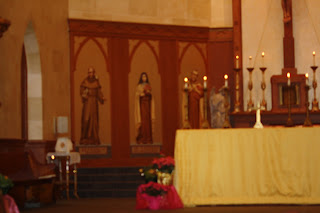 Here are three of the six new saints (from left): Saint Francis of Assisi, Saint Therese (the Little Flower), and Saint Angelo. I'd like to have someone do closer photographs of each. Any takers? 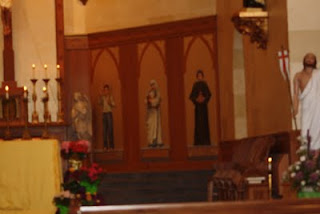 Here are the other three (from left): Blessed Jose Sanchez del Rio; Blessed Teresa of Calcutta; and Saint Elizabeth Ann Seton. Each of these was painted to look like a mosaic, and they do. 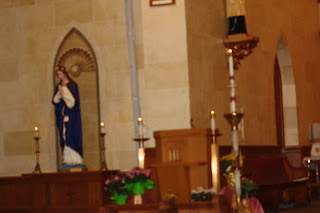 Here is a view of the new-old statue of the Blessed Mother. She was in the church until the 70s, then moved out, now returned. (Another image of Mary took her place, and we are going to put it in the school.) You can see our pulpit, which wasn't changed, but we may do something with that down the road. Also, you can just see the bottom of St. Stanislaus Kostka on the wall. 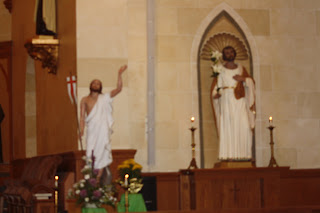 Here is Saint Joseph, again, newly repainted and restored to church. The image that was there for the past 40 years will be put into the school. You can also see the statue of the Risen Lord, which we bring out during Easter. He also got a new suit of clothes for Easter.

The area behind Joseph (and Mary) is not an alcove in the wall--that was painted by the artist. Before, a panel of wood was behind each side altar, but the squared-off style didn't look right with the rest of the church. That is the feet of Saint Theresa of Avila on the wall, right over where the priest sits. I figure, if I ever mess up, she'll rebuke me by falling on my head! Ora pro me, Sancta Teresa! 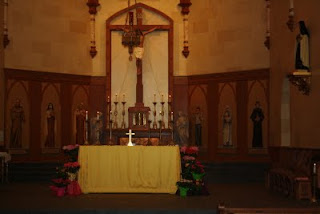 Here's an image of the crucifix and the reredos. The crucifix itself was taken down, cleaned and refurbished. The panel behind it had been wood, with a criss-cross pattern that many found distracting; so we took down the wood molding that formed the pattern, and the artist painted this mosaic background on canvas. The gold matches well with the saints' portraits and much of the gold throughout the church. You may not be able to tell, but I do have the "Benedictine Arrangement" on the altar: six candles and a crucifix. The altar cloth does have a "pucker" in it; the lady who made it new for Easter is going to fix it for us.

The floor here is ceramic tile, although the tiles look like stone. I pointed out to the servers that, to help them know where to stand, we installed (grout) lines on the floor! This floor will never get burn marks from candles or incense.

Certainly if anyone has close up pictures, let me know and I'll post them.
Parishioners have reacted with great happiness, saying they are "stunned" by the transformation. The Archbishop--who hasn't seen this yet in person--said he heard about it and was happy with what he heard. Many parishioners cried on Easter when they returned to church, and a lot more have strained their necks looking around.

These pictures, while good, don't do the project justice. There are many other details not captured here; so you'll just have to come and see for yourself!
Posted by Fr Martin Fox at 4:51 PM

Beautiful! These were well worth waiting for, Father. I can see that we will need to make a pilgrimage from Cincinnati to Piqua one Sunday to view everything up close.

Congratulations on a wonderful work well done! Next time I'm back in Oxford will make time to visit St Boniface.

What a beautiful church! LOVE the statues! AND the ceiling!

I'm also VERY happy to know you are still alive Father! I was beginning to wonder...

"Some people cried on Easter" - and many more cried when they saw the results of this renovation in terms of lost future revenue and parish membership. The pastor was warned, but chose not to listen to reason.

I'm really sorry you choose to take this approach.

The facts are as follows:

> The pastoral council had two stipulations: first, present it to parishioners and let's see what the feedback is, then we'll approve it. Second, we want to be sure to have enough money.

> The plan was presented at all Masses one weekend, by the committee of parishioners who had prepared the plan. Folks were free to offer comments; but they also had a written ballot on which they could vote, and offer comments of any sort. These were anonymous.

> The ballots were overwhelmingly in favor--between 80-90% (i.e., 80% were unreservedly in favor; something like 10% said do it, but offered suggestions or didn't endorse every part of it; about 10% said don't do it.)

This information was published in the bulletin. We have the ballots to this day if anyone wants to examine them. No one has ever asked to see them, or challenge this accounting.

> The parish was kept informed of the project as we moved forward. Parishioners responded favorably to every step, and showed up in good numbers to provide volunteer help.

> The project was completed as planned, on budget, on time. We did exactly what we proposed.

> Over the years, I get letters periodically when folks are unhappy. Do you know how many letters I've gotten from anyone unhappy about this? Zero.

> In September and October--after the project was announced and approved, and even after I raised the extra $100,000, we went to the parish with an appeal to increase offerings. Every parishioner was asked--in the pews or through the mail--to pledge increased giving to the parish.

If you are right that parishioners were upset, you would expect this offering campaign to have failed; and the pledge forms to come back with lots of anonymous, negative comments.

Do you know how many negative comments came back? Exactly one, out of hundreds that were returned.

Anonymous, did you cast a vote in April 2010 on this project? Did you speak out?

I know of only one parishioner who had raised strong objections; he came to see me, we had a good conversation. He readily conceded that we'd done a good job consulting the parish, and he agreed the parish endorsed it. His concern was to have enough money--and I told him I was going to raise more.

I asked him: what would you have me do? He said I had to go ahead, given the support the parish was giving it.

You're correct we need more revenue. But as mentioned, collections are higher than we expected. What is your basis for saying they are being lost?

Please tell me what "warning" you referring to? The 10% of ballots who said no? I ask again, do you believe that minority should prevail? If so, would you please explain why? Or, if you don't accept the verdict of the ballots taken, why not? Did you raise this objection at the time?

It is a relief to see a church that looks like a church rather than a gymnasium such as those built in the 60's.

The statues are wonderful. The ceiling is amazing! Great job!!!