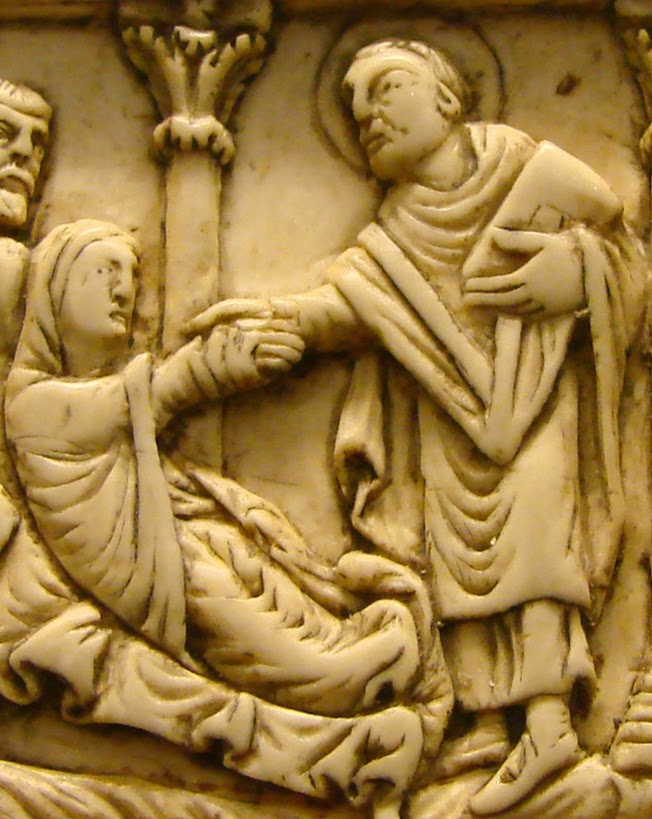 Today we celebrate our patron, Saint Remy.
His feast day actually falls on January 13,
but we are able to move it to Sunday.
To be honest, until I came here,
I didn’t know anything about Saint Remy –
or, Remigius, as he would have called himself.
I suspect many of us don’t know much about him.

As his name suggests, Remigius was a Roman;
he lived in northern part of the province of Gaul,
in an area near the border between France and Belgium.
As a boy, Remy was very bright and well read;
he was renowned for his learning and his holiness.
When he was 22, he was nominated to be bishop –
and he wasn’t even a priest!

Remy was born in AD 437.
That means he lived at a time when Roman society was falling apart.
Try to imagine what that might be like.
Imagine if we, in Ohio,
had some group in Cleveland start their own country;
and we would send messages to Washington, asking for help;
but little help arrived.

The new nation that was coalescing around Remy and his fellow Romans
was the Kingdom of the Franks;
the Franks were a Germanic people that had migrated out of the east.
The king of the Franks was Clovis.
The Franks were the rising upstarts, the “new rich”;
the Romans were the upper-crust whose star was fading fast.

King Clovis defeated the last Roman forces in Gaul;
the Roman era was finished.
Again, imagine what that might be like –
seeing your country and your culture washed away.

How easy it would have been for Bishop Remy to fear
and even hate Clovis.

Instead, Remy fostered good relations with the Franks.
He may well have been influenced
by Saint Paul’s words in the second reading:
“I have become all things to all, to save at least some.”

Because Remy made himself available to the Lord,
not only was King Clovis baptized, so were many of his advisors.
That set the whole kingdom on the path to becoming Catholic;
and thus the future nation of France.

There is another story about Bishop Remy
and it concerns the ampoule which you can see in his hand here.
It seems a dying man asked to be baptized;
and when St. Remy went to get
the oil of catechumens and sacred chrism, the containers were empty.
So Bishop Remy placed them on the altar and prayed;
and they miraculously filled.
The ampulla were buried with him, and when someone found them,
three or so centuries later, they still had oil in them.
These oils were then used, for many centuries,
to anoint the kings and queens of France.

Now we can understand why our French forebears, arriving here,
decided to name this parish after Saint Remy.

Now, let’s see if we can connect St. Remy to our own times.
Some of us can remember taking for granted
that our society around us knew who Jesus Christ is.
If that was ever really true, it’s not true now.
I won’t compare our society to the dire straits of the Romans –
but a lot of us think it feels that way!
And that brings fear.

What we know about Bishop Remy is that he was confident
that Christ would be the light of the new world
that was rising around him; and he was right!

More than that, he made himself available to the Lord –
and the Lord made it happen through Remy.

Availability. That’s our task.
You and I have no control over the future.
We have this moment – and it is up to us what we’ll make of it.
Will we, like Remy, fill this moment, this time,
with hope in Jesus Christ?
The Lord called Isaiah – he went;
he called Peter, Andrew, James and John.
They dropped their nets.
Something new was asked. They went.

Every year around this time,
we talk about the Catholic Ministries Appeal.
Next weekend, we’ll look at the needs that this fund covers
in more detail.

But just a brief reminder:
the Catholic Ministries fund is how the Archdiocese provides
for many in our communities who are poor and without resources.
Counseling and family assistance through Catholic Social Services.

Part of it goes to provide for our retired priests.
Part of it helps with outreach to colleges, prisons and hospitals.
And a portion of it supports our seminary and our vocation programs.

Archbishop Schnurr asked me to share with you
his own words on this subject. He provided a recording to play;
but that’s always a little awkward.
Instead, let me share part of what he said:

The Catholic Ministries Appeal, which begins today,
is our annual invitation to participate in God’s plan for His Church
by supporting these vital ongoing ministries.

Giving to the Catholic Ministries Appeal,
especially when our gifts are given out of joyful gratitude
for God’s generosity to us,
is much more than simply pledging financial support.

By giving to the Catholic Ministries Appeal
we are agents of these ministries –
feeding, teaching, and healing the people of Southwest Ohio
in the name of Jesus Christ.

In this way, we invite our neighbors to a closer encounter with Jesus –
to come and see, to “stay” with Him.

“In the light of the word of Jesus,
love is the measure of faith,
and faith is the soul of love.
We cannot separate … the life of piety …
from that of service to our brothers and sisters,
those flesh-and-blood brothers and sisters we actually meet.”

This week, you will receive a personal invitation
from the Archbishop in the mail.
Please consider your response prayerfully,
and pledge as generously as you can, even – or especially –
if you have never given to the Catholic Ministries Appeal before.

The Archbishop asks you to “consider this an invitation from Jesus
to ‘come and see’ what a difference your generosity can make.”

This is our chance to do in a practical way
what we prayed in today’s psalm:
“Here we are, Lord. We come to do your will.”