Several weeks ago, I saw this recipe on Father Z's blog, and fixed it; and it was unbelieveably good!

So tonight I'm doing it again.

Sorry, no pictures; I was under a rush to get it in the oven in time.

Admittedly, I did tweak it a little. I omitted "extra zest"; I just stuffed most of the lemon inside the chicken; and in addition to pepper on the outside, I added salt. How can salt hurt?

Meanwhile, I got out some fresh spinach, which I bought Wednesday, which I'll saute with some garlic and olive oil, and then finish with some Parmesan cheese. I've made that many times. 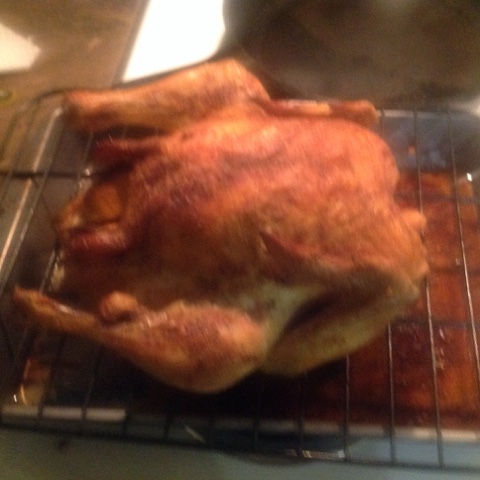 And here's the plate, with the sautéed spinach, and a glass of leftover wine: 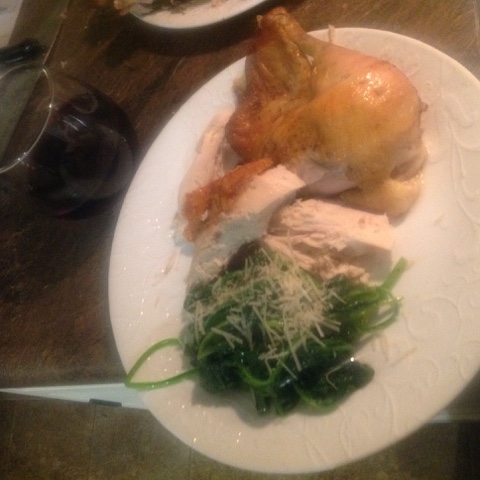 Verdict?
The delay was not kind to the chicken. It was a little over cooked. Not. Bad, but...it could have been much better. The spinach was delicious. The skin was excellent!
Posted by Fr Martin Fox at 5:20 PM

Still looks great. Could you have made a gravy to offset the dryness? If you can't stand it, I'll eat the leftovers for you. ;-).

I could have made gravy, but by the time I got to dinner, I was rather impatient.

All is not lost, however; I'm due to make some soup (I have bags of stock materials in the freezer), so I think that will be the destiny of this bird.

Or a stew! Pressure cook the bird and get the last of the meat off the bones then add the goodies to simmer. Fun With Chicken.

I love it when you cook--One can almost smell the aromas!

Great! I love your cooking stories!

Guessing, I would say that Fr. Z. got the recipe from the chef who made it for him either in Rome or Paris. I live a marvelous life vicariously through Fr. Z.