We don't need a Savior -- we have one already 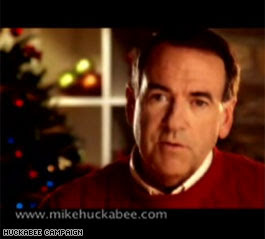 No doubt you've heard about the ad prepared by former Arkansas Governor, and GOP presidential candidate, Mike Huckabee, for the people of Iowa, in advance of Christmas -- featuring the so-called "floating cross." Gov. Huckabee says he didn't mean anything, it's just a bookshelf that accidentally looked like a cross; a commentator on TV last night said, you do things in a hurry in campaigns, and you don't realize what you did till it's too late; Peggy Noonan, writing in the Wall Street Journal, said these things aren't accidental. Dick Morris, on Fox News, thinks it was not intentional. While I have my suspicions, I am inclined to give Huckabee the benefit of the doubt.
I agreed with something else Noonan said: "Is there a word for "This is nice" and "This is creepy"? For that is what I felt. This is so sweet-appalling."

One reason I didn't like it was the symbolism, to me, of a floating, glowing cross. I certainly don't think Huckabee had any evil intent, but -- yes, given our nation's history, that is creepy.
Now, speaking more broadly, Huckabee and his supporters are complaining that critics are making too much of his religiosity. But that won't fly, because Mr. Huckabee himself has injected his religiosity into this campaign. He brought it up.

Meanwhile, we have the very interesting news reported by columnist Robert Novak, concerning Huckabee's loyalties in the internecine battles of the Southern Baptist Convention.

Now, this will seem obscure to many, but here goes. Some years back, there were great battles in the Southern Baptist Convention between "conservatives" and "moderates"--or "liberals" as their opponents called them. Folks in the SBC were fighting to keep their huge denomination from following the path taken by the United Church of Christ, Presbyterians, Episcopalians, and to a lesser degree, the Methodists. (The current agonies of the Anglican Communion are instructive.)

So where, according to Novak, did Huckabee stand? "Huckabee embraced the liberal church establishment to become president of the Arkansas Baptist State Convention."

Update (12/22): The Novak story matters more than it otherwise might, precisely because Huckabee clearly tilts liberal on a number of other issues: he hiked taxes substantially in Arkansas, he talks about more spending, he sounds dovish on Iran, and he's gone to war with the Club for Growth, which is probably the leading free-enterprise/small-government advocacy group.

Then, we have another problematic report about Huckabee: he plans to preach this Sunday at Cornerstone Church, pastored by Rev. John Hagee. What's wrong with Hagee? Well, two things: one, he's virulently anti-Catholic, and moreover, he's gone over the deep end with his enthusiasm for the Old Testament and our Jewish brothers and sisters, to the point that he said, in a recent book, In Defense of Israel, some very odd things about our Lord--such as, "Jesus did not come to earth to be the Messiah." Well, as you might imagine, that didn't go down so well with Evangelicals, so Hagee has done some verbal dancing about a "failure to communicate"--which is pretty laughable under the circumstances (you can read all about it here).

So here's the thing. Huckabee has become the flavor of the week for a lot of conservatives, and I have a feeling, rather soon, many may have buyer's remorse. If not now, they will later. Yet why are they falling into this trap?

This takes me back to the headline I wrote: many conservative folks are desperate for someone--anyone--to save them from the unthinkable fate that the GOP candidate for president won't win the next election. I wrote about this in October, and called it "political desperation fever." For awhile Giuliani was the guy we had-had-HAD! to support, because stopping Hilary justified any compromise with principle. But Giuliani's problems caused too much indigestion; and along came Huckabee, and folks gravitated to him as to a life-raft.

I believe in the value and legitimacy of political activism; I'm proud of the work I did before becoming a priest, I have a little involvement still, and I have encouraged many, over the years, to be involved. But politics are not our salvation. At the end of the day, God must take care of the world, after we've done all; and even if we do everything right, and all goes perfectly...

The world will still come to an end, when our Lord returns in glory, and all the kingdoms of this world fade away.
Posted by Fr Martin Fox at 4:02 PM

Father I am a Catholic Huckabee supporter and I have written on this "controversy" here
The Faux Controversy Over Huckabee and Catholics
http://opinionatedcatholic.blogspot.com/2007/12/faux-controversy-over-huckabee-and.html

Father If I may may I correct something in your post. I very much understand the confusion. I am talking about the Novak article you reference. I am assuming Novak is ignorant about the terms he is hearing. That is "liberal" and "Conservative" When one reads that article one gets the impression that Huckabee was supporting some liberal far left version of a Southern Baptist. That is incorrect. I suppose that article irks me because it misrepresents a important and interesting part of AMerican Christian Church(I guess I should say Baptist faith community) History.

BY the way I talked about that article here
Robert Novaks Very Misleading Article on Huckabee and Baptists
http://opinionatedcatholic.blogspot.com/2007/12/robert-novals-very-misleading-article.html

TO put it briefly the terms that were used were more to the point "moderate" and "conservative" It pretty much had to do with a very narrow topic of Biblical interpretation. I have seen some very "conservative"(both religious and politics wise) Southern Baptist bloggers a tad miffed that Novak seems to have totally given a secular meaning to those terms and given a wrong impression.

I just wanted to clear that up. I guess as a former SOuthern Baptist who converted to Catholicism to see now millions of people get the wrong impression of a important part of Evangelical history wrong because of an article that was misleading irks me for some reason :)

Briefly, as a former Southern Baptist, but one who is still a dispensational evangelical, I have to second James' comment. He accurately describes what was happening during the 70's and 80's among Southern Baptist which continue to this day.

There are still problems with Huckabee's record as governor, but that is another category.

All due respect, Father, but this is absurd, and unworthy of you. Comparing Huckabee to Giuliani as a "desperation" candidate (as you clearly do) is grossly unfair and misleading. This is particularly problematic because you then offer no serious justification based on issues for your claims that Huckabee is a desperation candidate for conservatives at all. Whatever positions you personally may disagree with him on, I don't know anyone who seriously questions that Huckabee is committed to the pro-life cause, which is more than one can say for any of the other leaders in the GOP race.

I think there is a great deal about Gov. Huckabee's record that conservatives will not like.

Beyond his tax hikes, there is his talk of a nationwide smoking ban; and just recently, he mused about how excessive CEO salaries are, and if boards of directors didn't deal with it, he might think about legislation.

This is not a conservative way of approaching things.

Being prolife is essential, but for many people who consider themselves conservative, that is not the only issue.