Abercrombie: not obscene, but what is it? 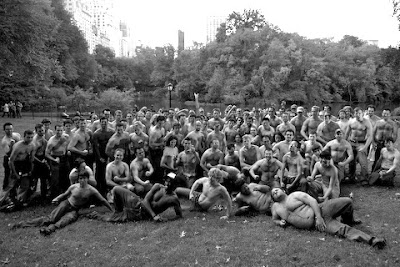 On Friday, I gave my thoughts on Abercrombie & Fitch's marketing approach; over the weekend, police in the Virginia Beach area carted off huge posters from a store there on charges they were obscene. Despite media reports to the contrary, I had nothing to do with it.

Since merely having "Abercrombie" and "obscene" in my headline above will net me lots of google hits, I will refrain from the cheap sensationalism of putting one of A&F's typical picture's in this post.

The photo above is, rather, from an organization called "Imrov Everywhere" that organizes pranks, inviting all manner of folks to join in. As far as I can tell, the pranks are harmless: one was to have about a hundred folks show up at Best Buy, dressed exactly like Best Buy personnel, and just stand around. Another was to have a group of six or so act out a 2-minute drama in the middle of a Starbucks, and then re-enact it, like a scary, sci-fi loop, for about an hour or so.

The picture, above, is from a project to have about a hundred men shop shirtless at a Manhattan A&F store. The management was not amused, which amuses me a great deal.

Anyway, the presenting question concerns the marketing strategy of Abercrombie, and related subsidiaries, Abercrombie kids and Hollister. From what someone said in comments at a blog by Ann Althouse, the problem is worse for young girls' clothing.

No, this is far from the worst problem in the world--but it raises the issue of the sexualization of, well, children; and Abercrombie needs to just quit insulting everyone with its line, "we are aiming at young adults"; nobody believed the tobacco industry on that one, either.

I do wonder how many parents are taking an interest in this. I certainly see a fair number of shirts at Mass with these brand names, and I really wonder if there aren't parents who actually think this is okay. My basis for saying that? Two things: occasionally seeing parents of teen children, in their forties, whose bearing suggests they are trying to hang on to their own youth; and parents who, to my mind, have quirky agendas with their children. I recall talking with a boy, a few years ago, after Mass; he had highlights in his hair, something--at that time--I noticed a number of the boys had, all in third or fourth grade.

One boy's hair made me think of a tiger and I told him that, and he really enjoyed that; another boy, when I asked him about it, seemed distinctly uncomfortable, so I asked, whose idea was it? "My mom's. Now, of course, mom wasn't there to defend herself, but I have seen enough pre-teen boys dressing and carrying themselves like teenagers to make me think there's something there. With girls, I think its pretty clearly the marketing; I am pretty sure fathers don't want their daughters dressing too grown up, let alone slutty--because, after all, they haven't forgotten what teen boys are like; but am I right that some moms are pushing their sons in this direction? Anyone else picking up on that?

I think Virginia Beach's approach is wrong; there's no way an obscenity complaint will stand against Abercrombie; one commenter at Ann Althouse's site had it essentially right in saying, "Abercrombie made the complaint"--i.e., this story serves their purposes very well.

But what to do? My suggestion is vote with your pocketbook, and as a commenter said Friday, parents, don't be afraid to say no and stick to it. Again: does anyone want to take the counter, and say this is all no big deal?
Posted by Fr Martin Fox at 11:22 AM

We have a shirts that read/ ABreadCrumb And Fish-He still works miracles! We wear these in oposition to AF and their trash.
Although friends may roll their eyes at us and think we are too backwards, we are encouraged by our children; they understand that it is wrong...and that is what matters.

go here to view their photo gallery:
One girl is not wearing anything? What are they advertising then?
One boy is HOLDING his pants...and not wearing anything...
http://www.abercrombie.com/anf/lifestyles/html/photogallery.html
View discretion is advised.

We Americans are egalitarian--even chronological distinctions must be done away with. Children should dress and act like adults--and vice versa.

One more thing you need to know father, they do not cater to what they consider "over weight". You will notice there are no XL or so clothes. Like Ralph Lauren. They cater to "small and sexy". Actually, some of their clothes would only fit malnurished people in my opinion.

I work with youth in grades 7 - 12 and it has been my observation that fathers of daughters are pretty much absent. When I see the girls dressed like little hookers my first question is "where are the fathers."

The last few years the girls have been pretty decently covered but their clothes are still way too tight.

Wish I could oblige you and argue the other side, Father, but my heart's not in it.

I've been wedding dress shopping, and now am bridesmaid dress shopping. It is really, really difficult to find stuff that's not grossly inappropriate for church, and most of what there is is found on sites catering to Mormons. Even googling "modest bridesmaid dress" comes up with some very...interesting insights into what people consider "modest".

It's easy enough to avoid A&F, but it's much more difficult to effectively "vote with your wallet" on the issue more broadly, because there are fewer and fewer modest clothes available, and more and more media cramming naked and nearly-naked advertising down our throats, so it starts to seem normal after a while.

I guess that's one of the "good" things about being big... I couldn't shop at places like this or dress provocatively if I tried, with the possible exception of the occasional deep neckline.

Father, I am on your side, especially since I am the mother of a 10-year-old daughter. I am fortunate - so far, my daughter has not shown interest in clothes. Whatever her Dad buys her at Target (and my husband is a bargain hunter), she likes, so long as it's jeans and a t-shirt.

But when I have had to shop for a special occasion, such as for Easter, it is a definite challenge to find clothing for GIRLS - not girls drseed up like 25-year-olds, but GIRLS. I often have to rely on mail order. Last year I managed to bypass the spaghetti strap tops for a blue gingham sundress that I paired with a plain white t-shirt and a lovely knitted white sweater. This year I will start earlier to find the dress.

My nineteen year old daughter is under a great deal of pressure from a girl "friend" of hers who told her she looks like a granny and needs to get jazzed up. She dresses modestly (usually) and puts her hair up as much like Elizabeth Bennet as she can get it. She's finding the pressure a little overwhelming. ( Her friend has taken to tight low-cut clothes.)

On a side note a friend of mine overheard a girl in a clothing store say, "Oh, not that! That's for those Christians" about a pretty dress on the rack. 2 cents

I've found the clothing on some Mormon websites to be very stylish but also modest. The shirts are not cut so low, not as tight, and longer. The pricing is very reasonable, too. It's all very tready so the girl's don't stick out like a sore thumb. The dresses are very nice also.

I agree with what's been said. A note on that highlighted hair. I noticed a few years back when that was some sort of fad. but I WAS surprised at how young the boys were who had that. I asked a young boy at our church about it, and a little digging around also revealed "mom's idea." Teenagers with hair fads are nothing new, and in general as long as it's not too outrageous, can be glossed over. I personally thought a fad for an 8 year old was inappropriate though. I suspect a few fist fights in a few schoolyards across the country settled the matter re: that particular fad. At least among the very young! In other words,, after the color faded there was no repeat performance!

In my day, a young boy with a fad like that would have likely gotten a punch in the nose from the other boys.

BTW, like you new color set, much easier to read BUT can you change your link color? Black on purple is not easy on the eyes! Maybe to bright yellow? Just a thought....

Interesting comment about the wedding attire... I also have found the strapless only weddings a bit immodest. I don't think I have sung at a wedding in the past couple of years when the bride had a dress with sleeves of any sort. That goes for the bridesmaids, too.

Side note: I had been hauling around my wedding dress (modest, thank you)for about 23 years when I decided there was no reason to do it any longer (I have only sons, no daughters). I offered it to the local Poor Clare monastery in my hometown. There were very cautious about my offer, saying they would have to see it to see if it was appropriately modest... to my great joy, they declared it suitable and it is now one of the dresses they keep at one of their new monasteries (in Chicago, I think).

"I recall talking with a boy, a few years ago, after Mass; he had highlights in his hair, something--at that time--I noticed a number of the boys had, all in third or fourth grade. One boy's hair made me think of a tiger and I told him that, and he really enjoyed that ..." -- Father Martin Fox

Psst, Father. DON'T tell the little boys in your parish how much you like the highlights in their hair. Trust me, it hurts the team when you do stuff like that.

I was banned from buying Abercrombie clothes as a teenager, and it worked. I wasn't about to spend $50 on a pair of jeans to have Mom throw them away!