What a difference a day makes (part 1)

Where yesterday -- even after the fiasco with the subway -- ended up being an unhappy day, today was beautiful and fun. Let's go the tape...

First, let me tell you about the rest of my yesterday. Early last evening, when it was too early to get dinner, I was reading some articles online, as I was doing just now. And I was reading one of my favorite Catholic blogs, and had a rather persistent, "you need to update" message that seemed to be from Java -- i.e., a software company whose product is part of lots of websites.

Well, those messages from Java are pretty routine. This one, there was something off, apart from it being in Italian. But, I'd updated Java before, so...

Well, I bet you know what happened. My "Spidey sense" was right; it wasn't Java; and as soon as I hit that button, all @#%! broke loose with my computer. Suddenly, I've got all sorts of programs opening up, things blinking and flashing...

You know how it goes, right?

Well, I took the "uninstall" route, but that didn't solve the problem. The long and short of it is, I ended up doing some research and buying a "spyware" program that showed promise of dealing with this.

And, it did. But all that took a lot of hours. I never went to dinner, and I was up pretty late. And I was grumpy.

Well, this morning came fresh and bright, and I was out the door at the crack of 11. It wasn't just languor on my part; I was spending some time with my laptop, running both the spyware program and my updated antivirus program, to make doubly sure all the crud had been cleaned out. I think so!

Today's destination was not Saint Paul's. I'd gotten a reply to an email from earlier in the week, indicating that they don't allow priests to offer Mass privately; I was welcome to concelebrate, however. So I wrote back to find out when they have a Latin Mass, as I think that is more likely than English, and I'd prefer not to concelebrate in Italian, as I have but a few words of that tongue. If I don't hear back, I'll head down there on Sunday morning and hope for the best.

So, today I decided to visit the Basilica of the Twelve Apostles. The doors were closed when I arrived just after Noon, but they reopened at 4. So that gave me some time to wander around, catch some lunch, and this perfect spring weather.

When I first got off the bus and started looking for the church, I asked a fellow playing a clarinet where it might be, and he pointed me in the right direction -- which happened to be 180 degrees from where I was intending to go! (Yes, I tipped him.) After finding the church, I walked back his way, now on my way to the famous Trevi Fountain.

Here he is, in a fascinating atrium, which -- when I came upon him, he seemed to have all by himself: 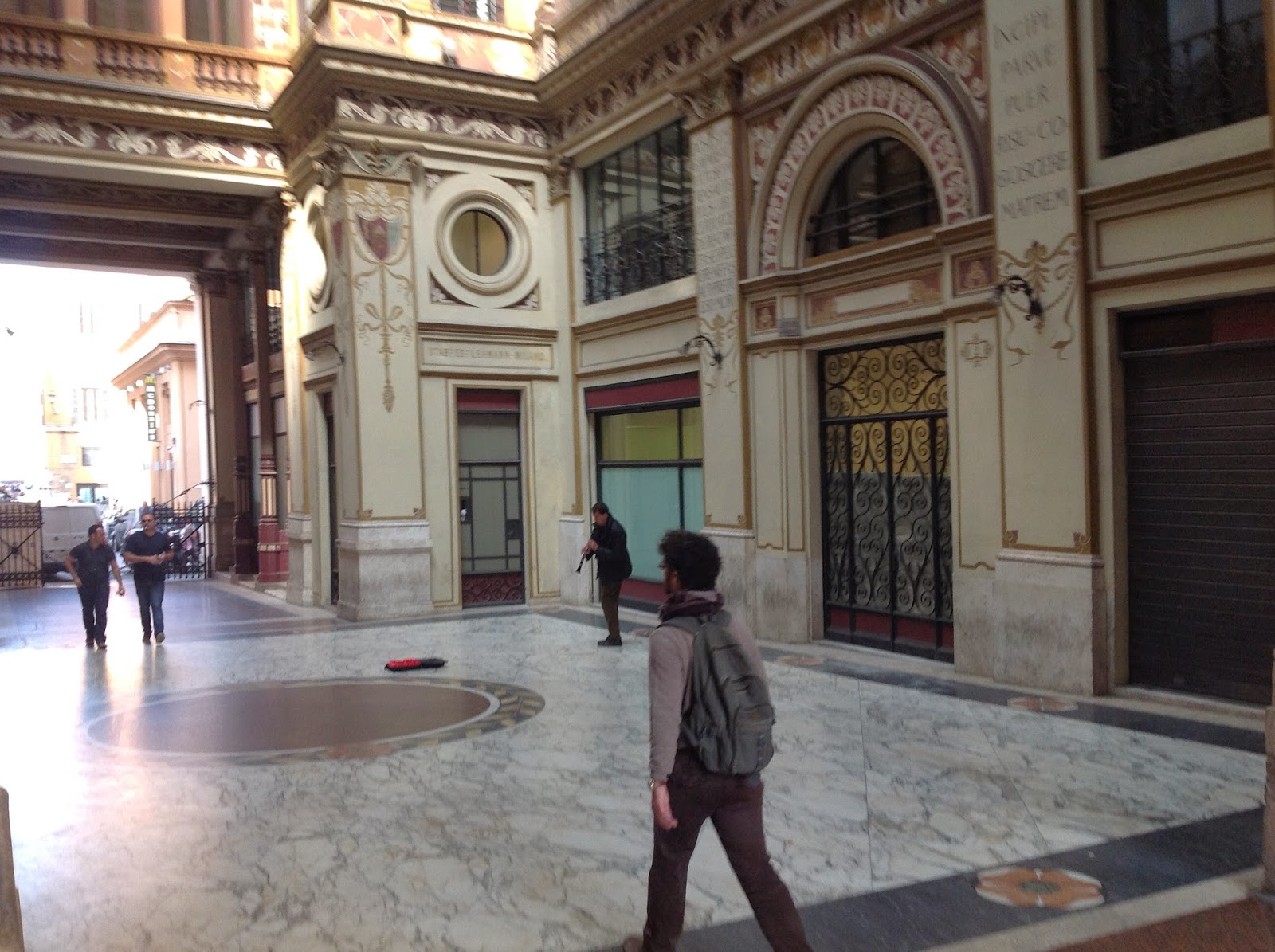 In fact, I passed by him later, and he seemed to get a fair amount of traffic; but in my first two encounters, it was pretty empty.

Here's a view of what was overhead: 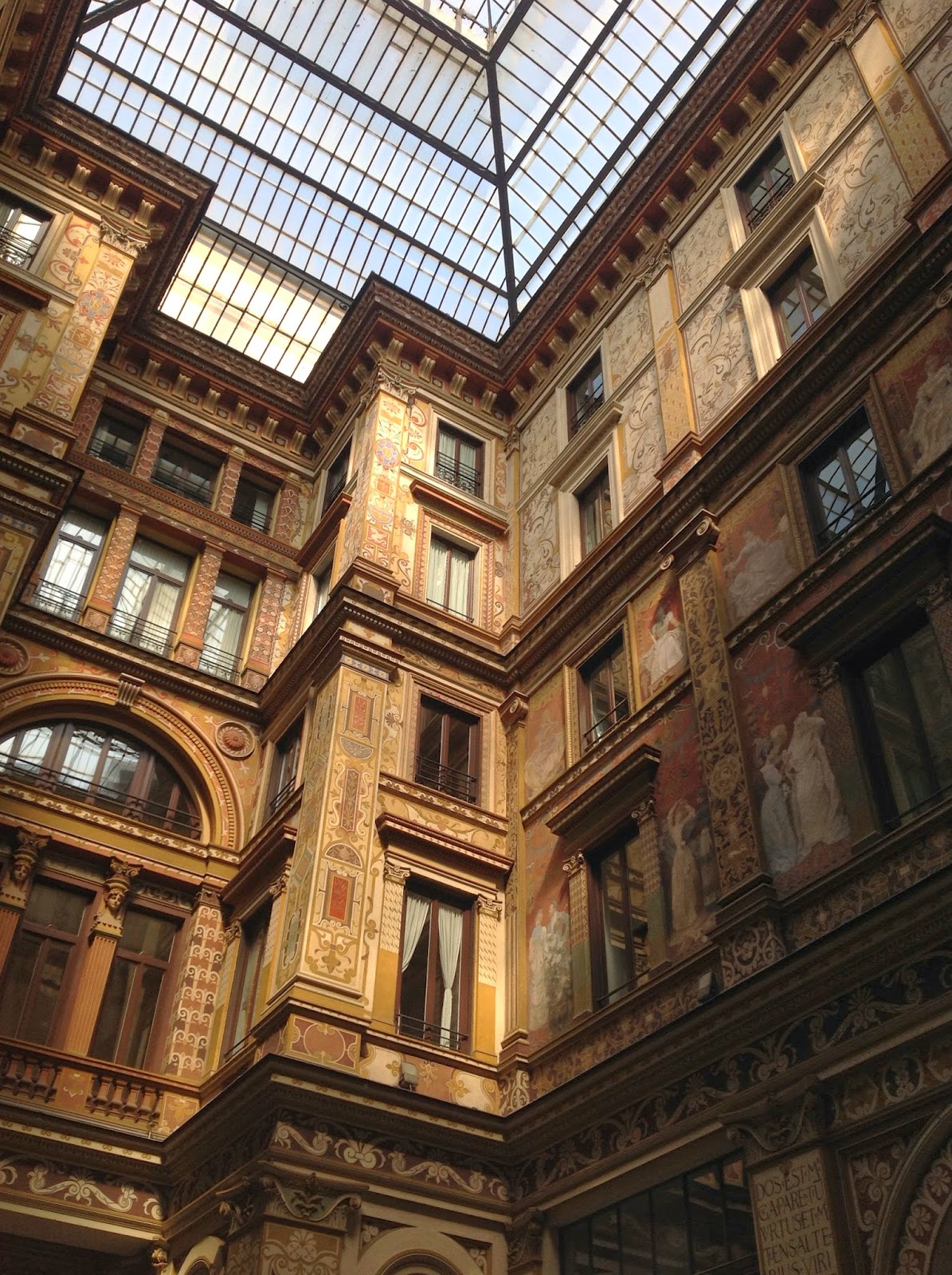 When he started "Rhapsody in Blue," my heart soared; that's one of my favorites! But he didn't stay with it; he toodled and woodled, and I moved on.

One of the features of Roman streets are battalions of vendors, selling everything you can imagine. I saw a number of them selling some sort of toy -- here's a fellow demonstrating it. It's a gelatinous ball, with some sort of face on it; and when you throw it against the table, it flattens out like it'd been run over, and then slowly resumes its shape. I don't know if you can see it, but it's there. In the United States, I'd have asked him about it; but here, if you show interest, you see his entire inventory, even as you flee running. 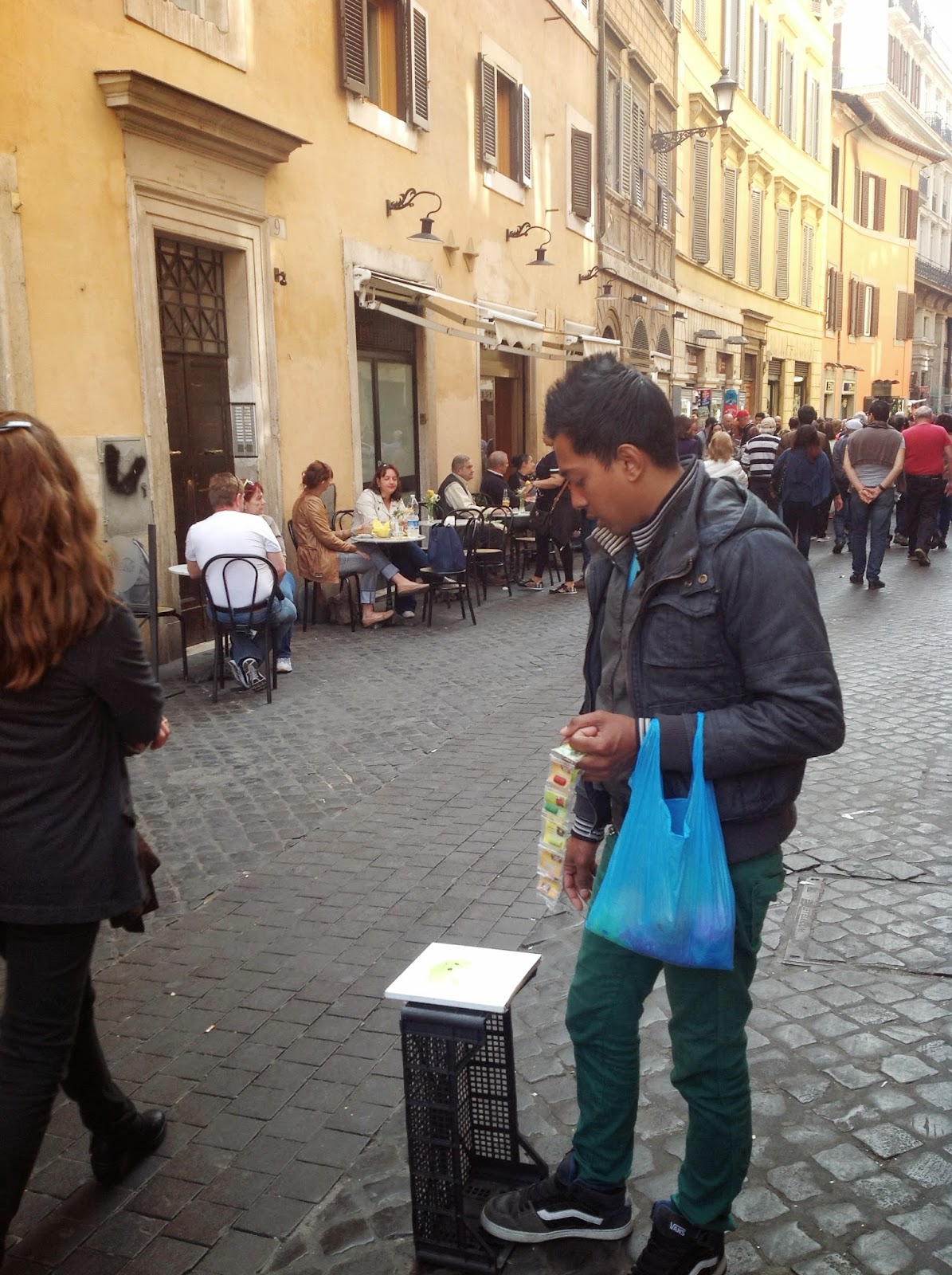 One of the features of Roman streets are battalions of vendors, selling everything you can imagine. I saw a number of them selling some sort of toy -- here's a fellow demonstrating it. It's a gelatinous ball, with some sort of face on it; and when you throw it against the table, it flattens out like it'd been run over, and then slowly resumes its shape. I don't know if you can see it, but it's there. In the United States, I'd have asked him about it; but here, if you show interest, you see his entire inventory, even as you flee running.

And here's the famous fountain -- which really is spectacular: 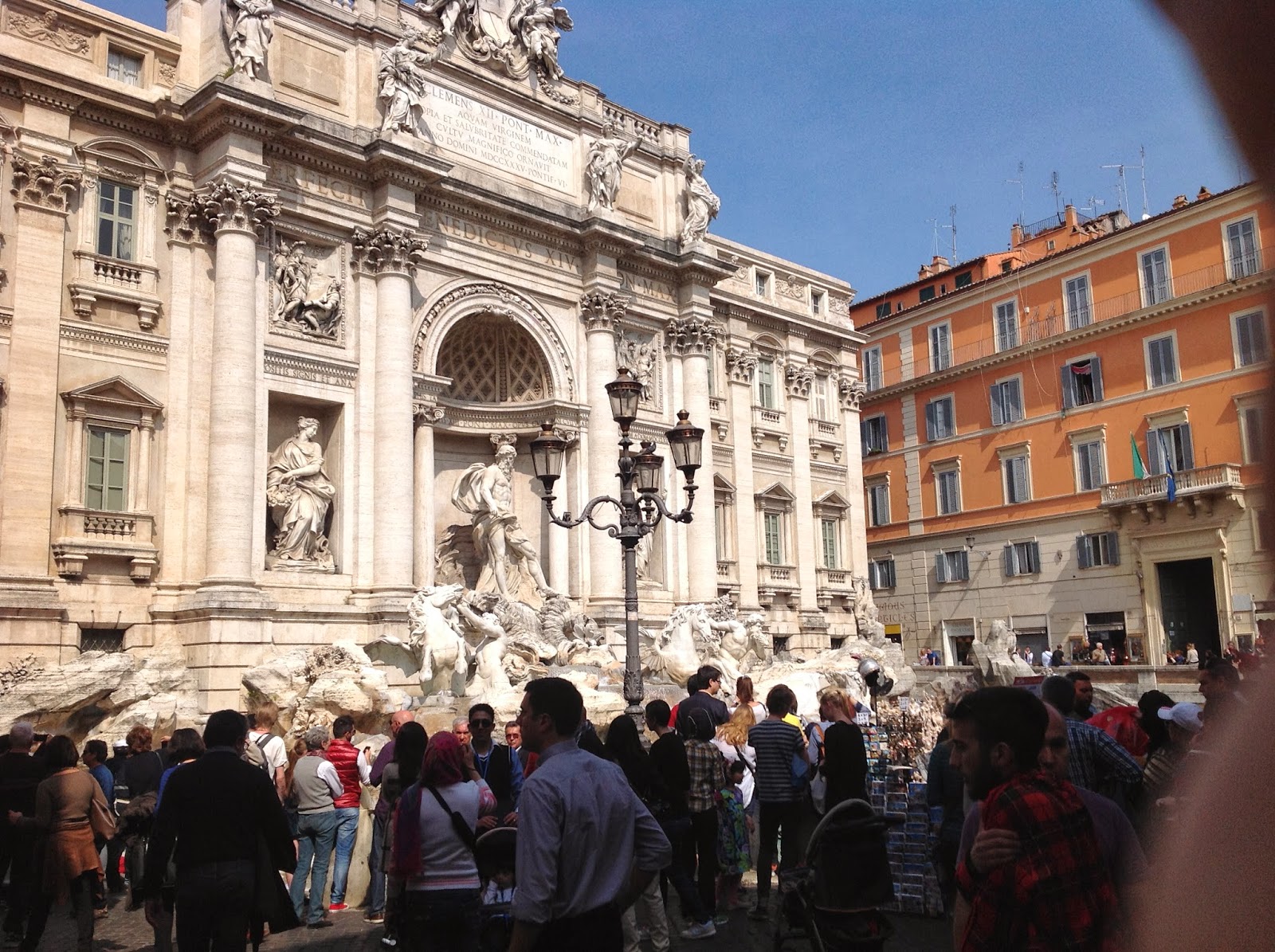 It's a better picture if no one is standing in front of it, but I'm not getting up that early, sorry! This is the fountain into which you're supposed to throw coins; the number varies depending on what sort of with you have. Also, I think you're supposed to do it with your back to the fountain. No, I didn't throw any in.

Well, I watched people watch people at the fountain for awhile, then wandered off in a new direction. I came upon a couple more churches, but they too were closed. When it got a bit past one, I thought it a good time for pranza -- i.e., lunch. As it happened, there's a restaurant near the basilica I've visited before; a lot of clergy come here, particularly American clergy. They're always very welcoming to priests, and the menu had English on it, and the waiter spoke some English. Even though I am not afraid of all-Italian menus, using English -- especially when it's rare -- is nice.

As I'm finishing pranza, I hear a commotion from nearby. Someone seems to be giving a speech, and there's cheering and so forth. Then I realize: that's a demonstration of some sort! This is interesting! I want to see this! So I pay my bill, and poke around the corner, and sure enough, there was a police barricade, and beyond it a crowd of several hundred people, all gathered in front of a public building.

Here's one of the banners: 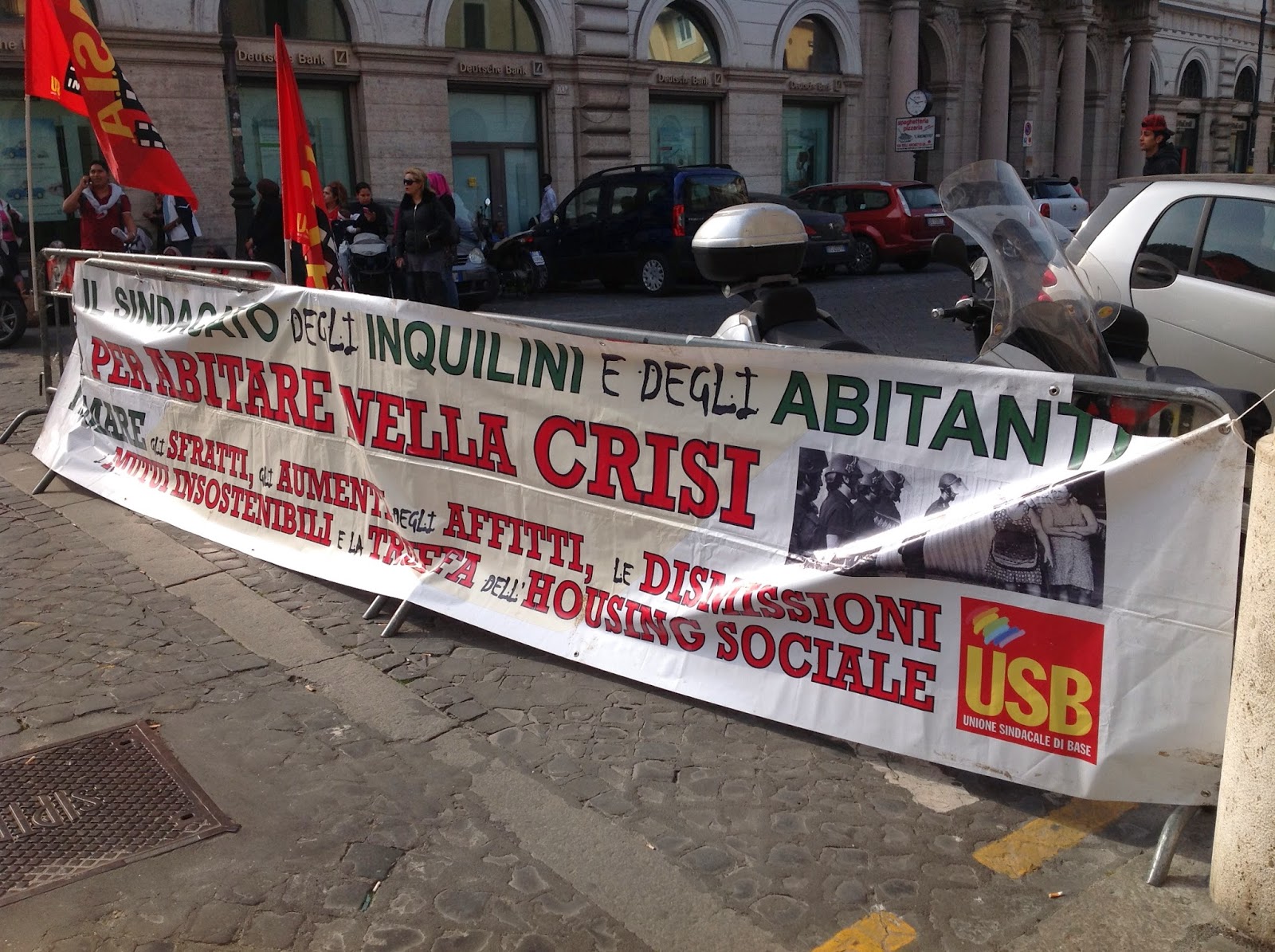 Here's a shot of the crowd: 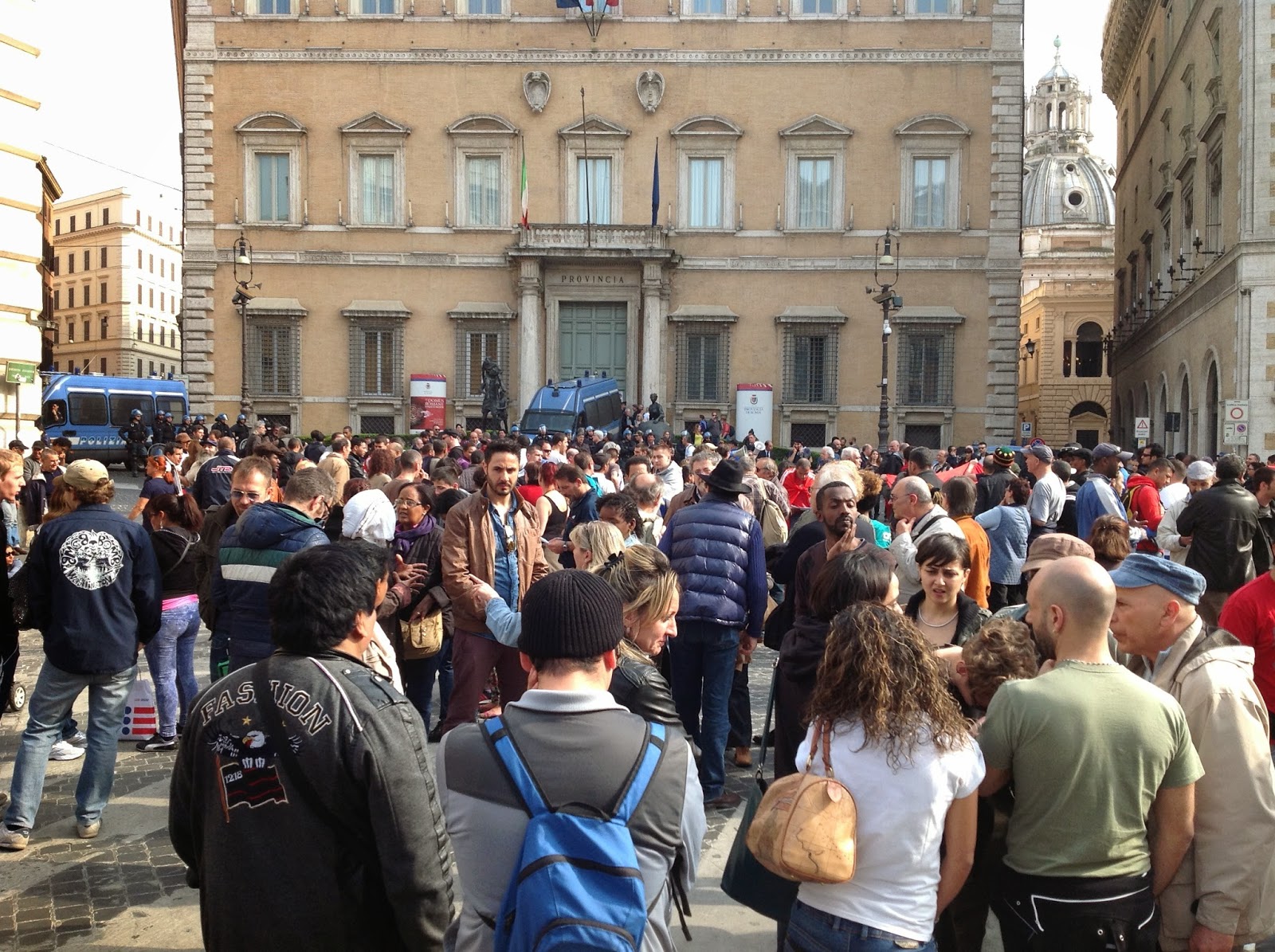 Here is one line of police: 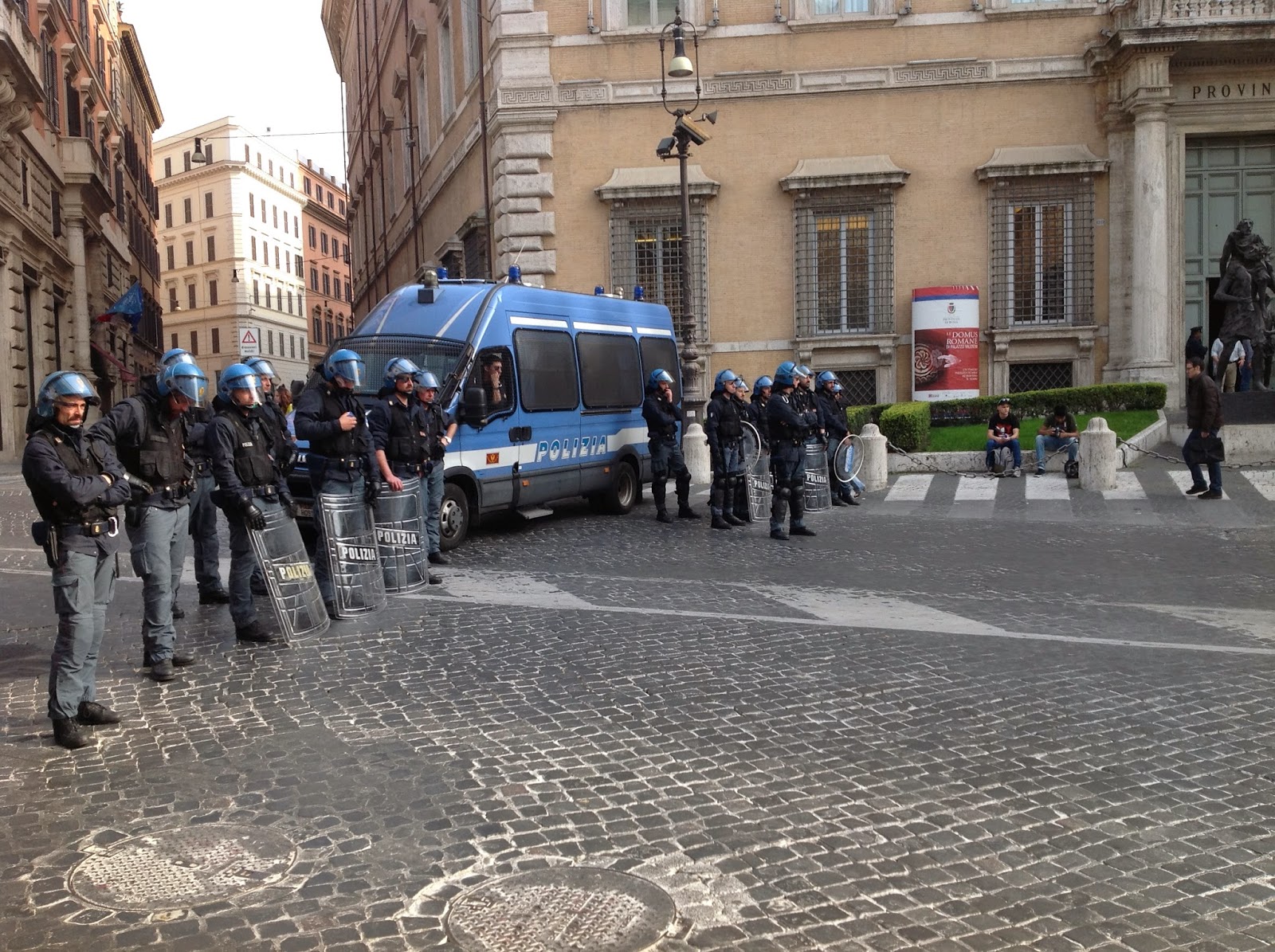 There were several passionate speakers; here's one of them: 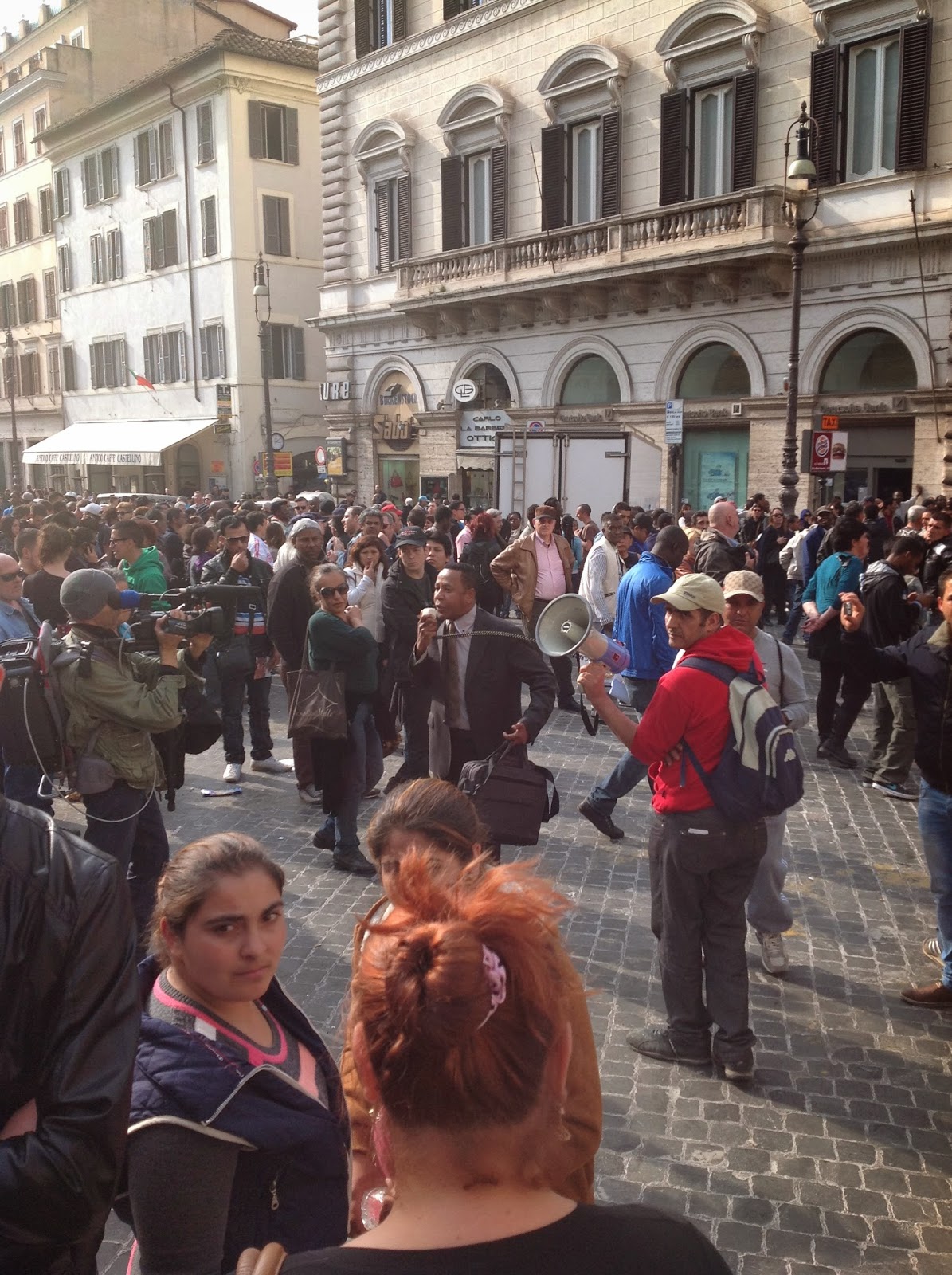 I had no idea what was going on, so I asked some journalists sitting on the curb -- I assume that's what they were, from their furious work on laptops. One of them explained it had to do with housing issues. Not long after that, a gentleman, who I think was one of the organizers, noticed me in my collar, and came to talk to me. I think he was hoping I'd be an ally, but I explained I was an American visitor, and listened as he shared a few thoughts about the problem, and asked me to "reflect" on it.

If you're reading this, Archbishop, that's really all that happened. Honest! I mean, I had no idea that giant red banner someone thrust into my hands had a hammer-and-sickle on it! CNN had no business videotaping that! And no matter what anyone from the Italian government may tell you, I assure you it was all a misunderstanding.

Here, see for yourself! Here's a clip I found from CNN:


OK, dinner break! I'm not missing dinner two nights in a row! See you on the other side...
Posted by Fr Martin Fox at 4:48 PM