Assisi of Francis and Clare

Well, I'm back in the parish, and pretty much bounced back from jet lag.

So I think I should give you a wrap-up on last few days in Assisi. This will have to be brief, because I have to head over to church in a few minutes.

In this room, in the bishop's residence, is where Saint Francis came to the bishop and, in front of his father and others, renounced his inheritance and removed all his clothes and gave them back to his father. I'd always thought this happened in the town square -- probably because that's how at least one movie depicts it. 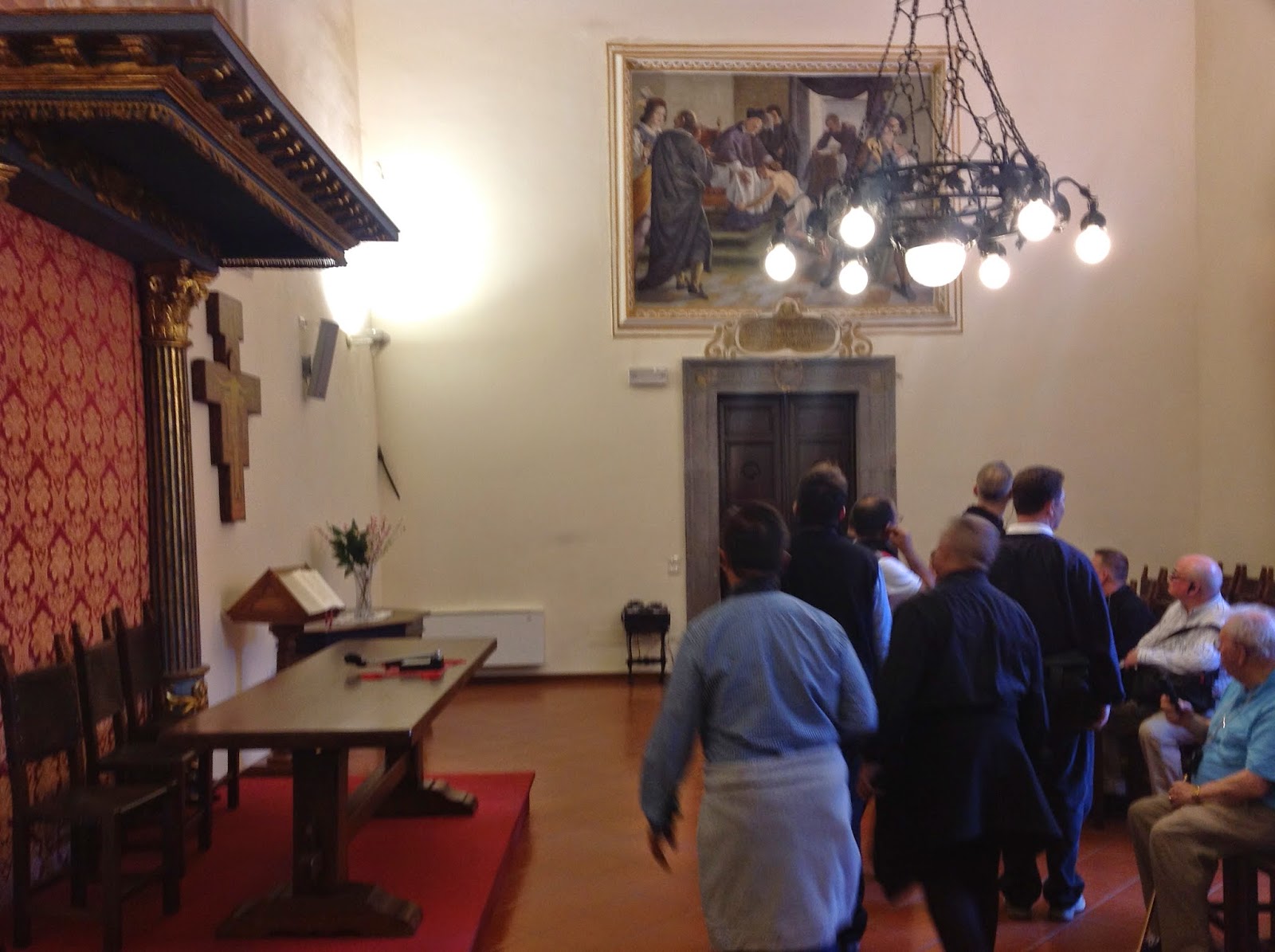 This is an ancient Roman temple, built before our Lord was born. It's now a church. 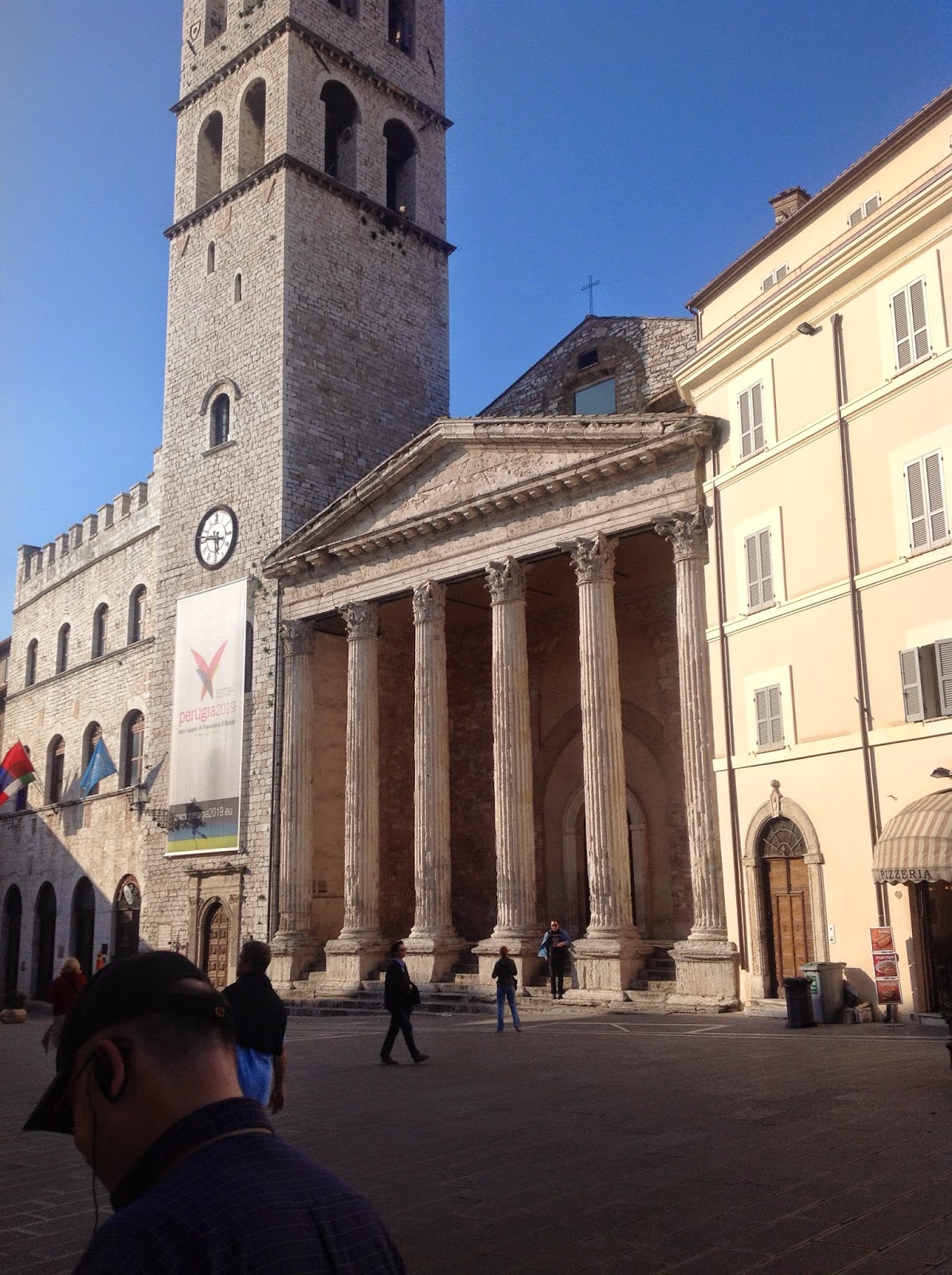 In the Benedictine monastery up on the hill overlooking Assisi -- where Saint Francis spent a lot of his time (it's where he preached to the birds, and rolled in the rose bushes) -- this cross is mounted on the wall. It was used by Saint Bernardine of Siena who preached devotion to the Most Holy Name of our Savior. 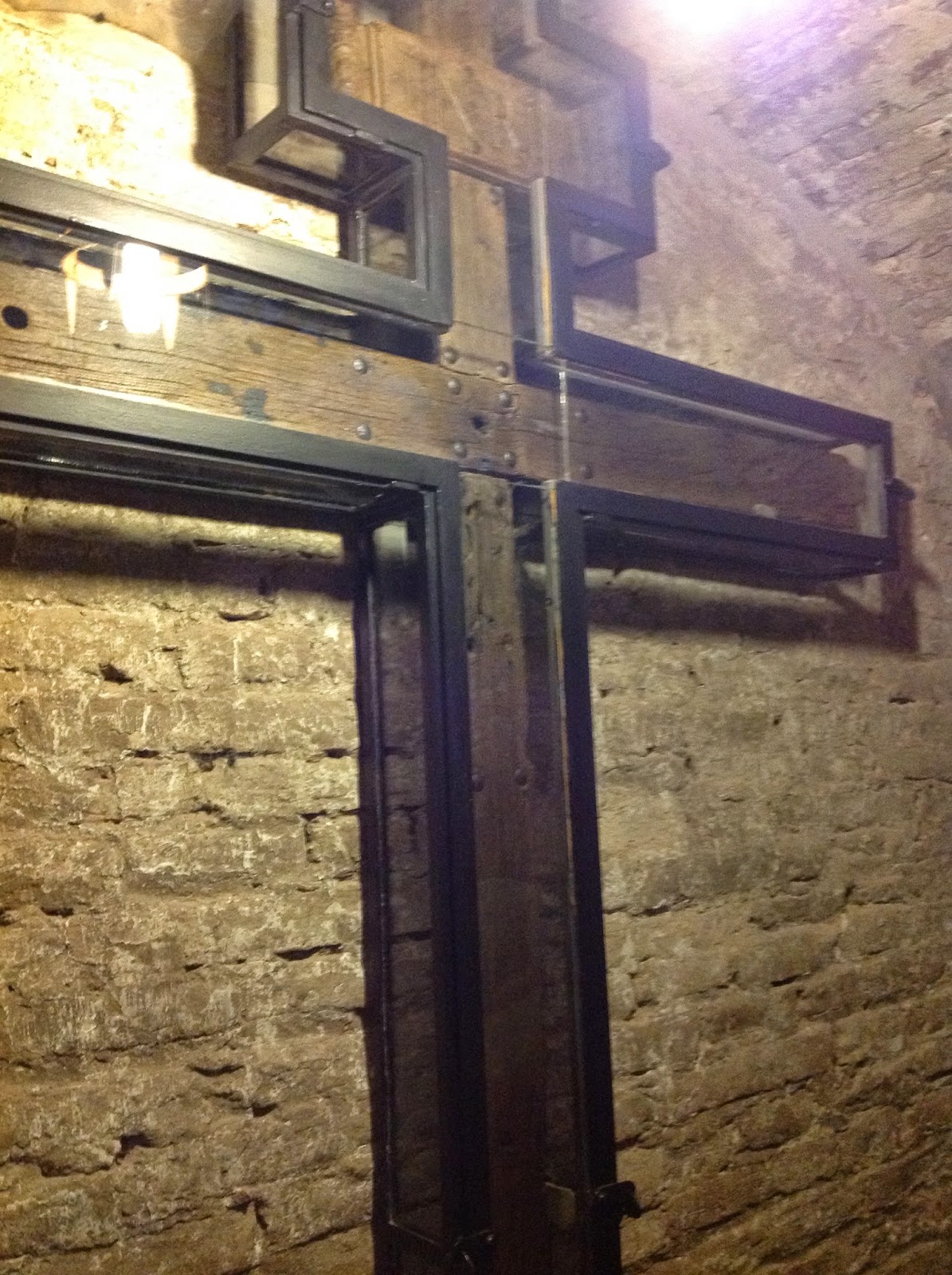 This is a statue of Saint Clare, in front of the church of San Damiano -- which is (a) the church Saint Francis rebuilt after our Lord called him to "rebuild my church" and (b) where Saint Clare and her community first gathered. This recalls the time Clare, seeing an army led by Emperor Frederick II toward the convent, went outside and held up the monstrance, containing the Eucharistic Lord. The army saw a blinding light and got the message. 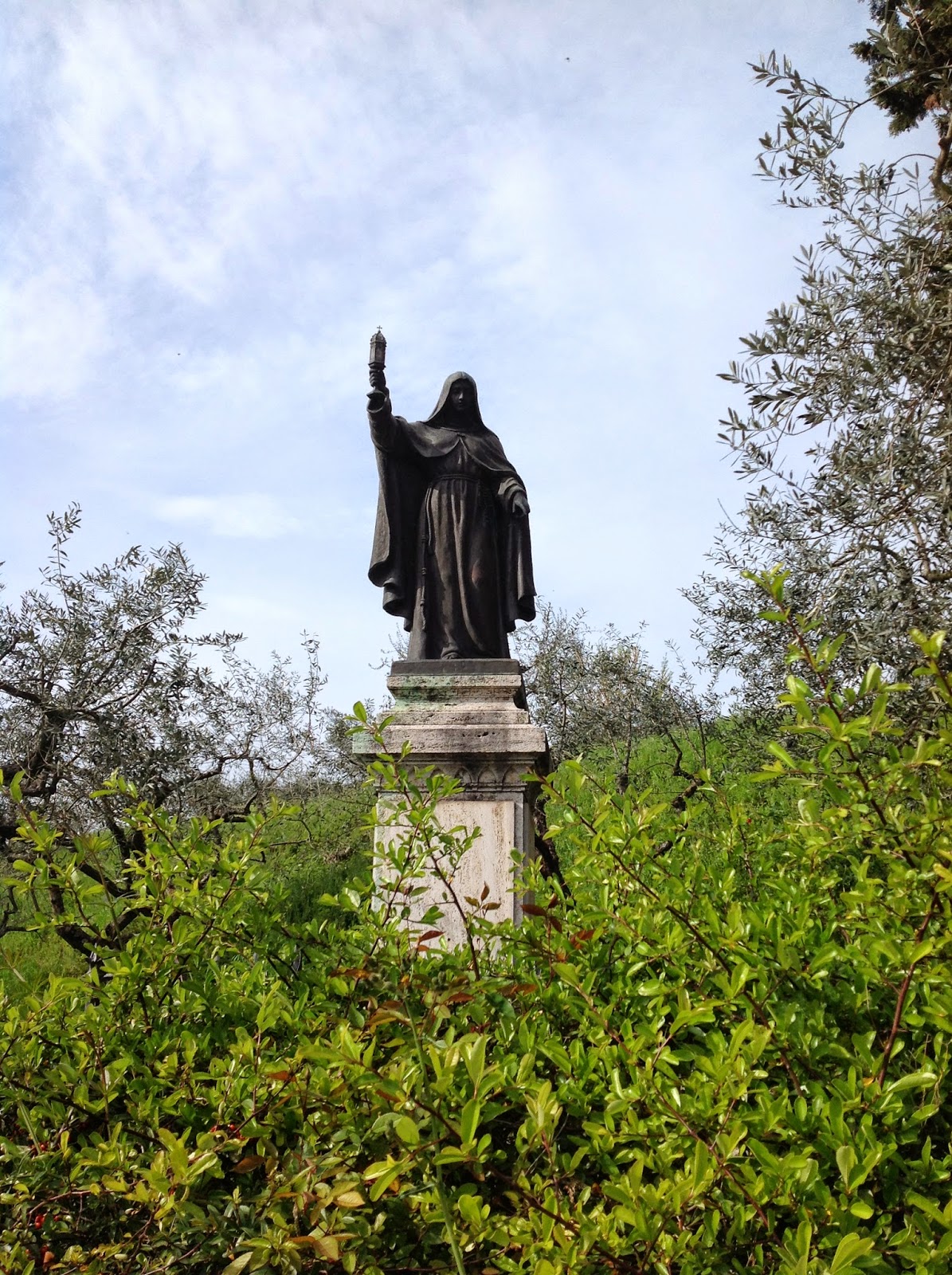 Here's the church of San Damiano. If you look closely, you can see, in the stonework on the left, a smaller building before it was made larger. That's what Francis (perhaps with help) did. 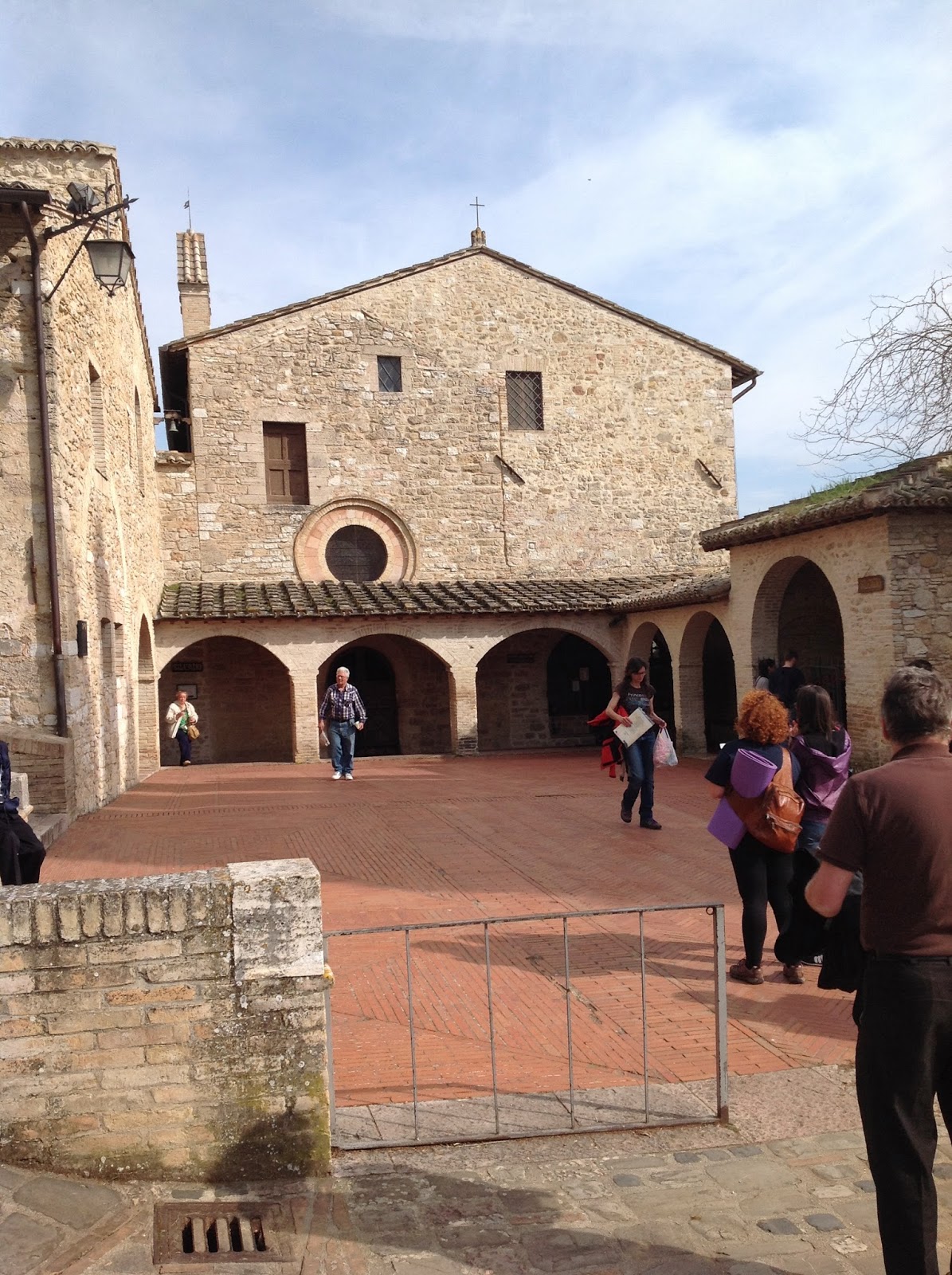 Here's the cross from which our Lord spoke to Francis. It's now in the Basilica of Saint Clare. 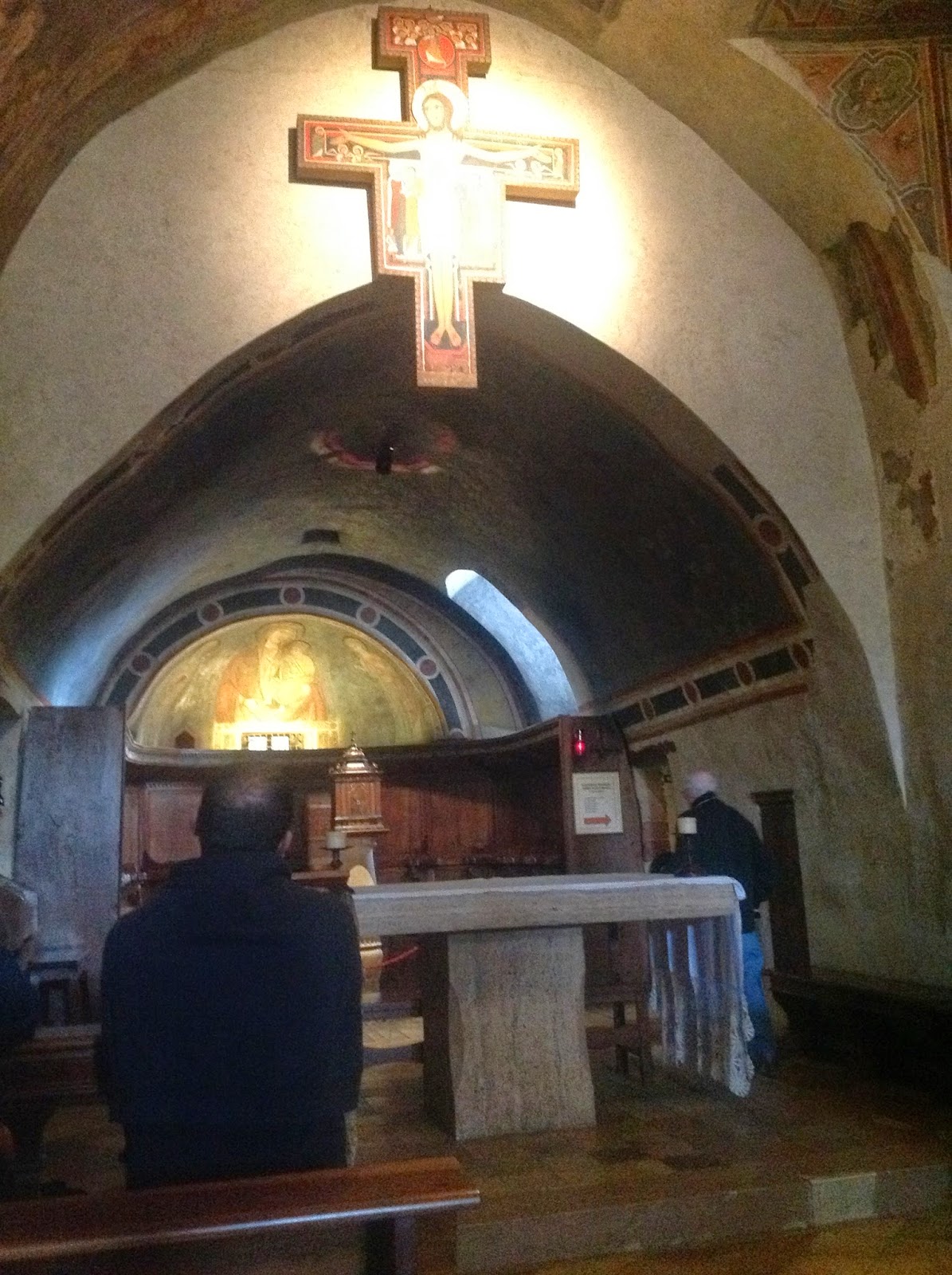 Here's the table where another miracle associated with Saint Clare happened. The pope came to visit, and he invited Clare to say the blessing over the meal. When she did, crosses appeared in the bread that was on the table. 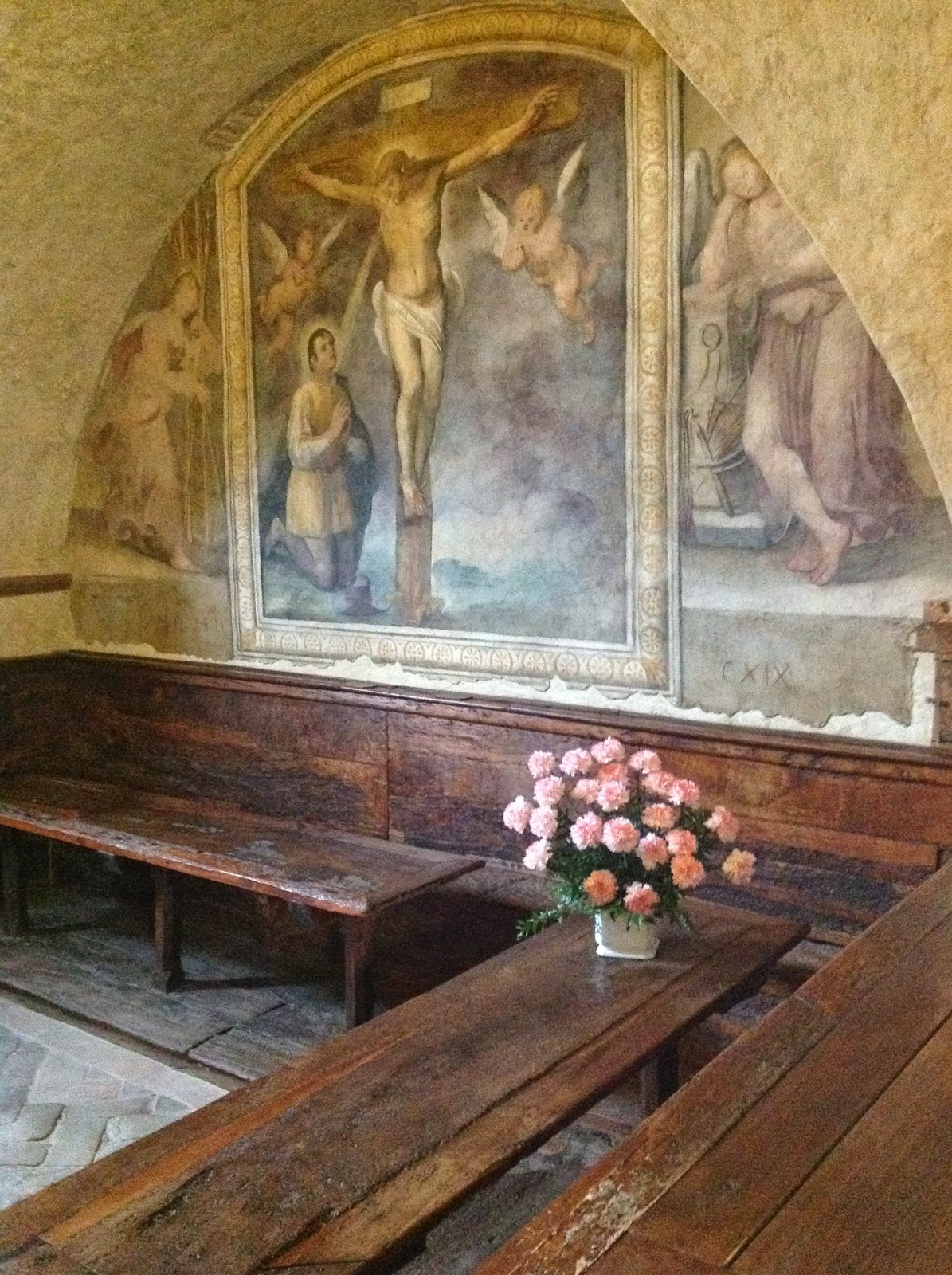 Here's the Basilica of Saint Francis. His body is buried here (we had Holy Mass at his tomb). This building was damaged during an earthquake in the 1980s, and some of the damage to artwork could not be repaired. 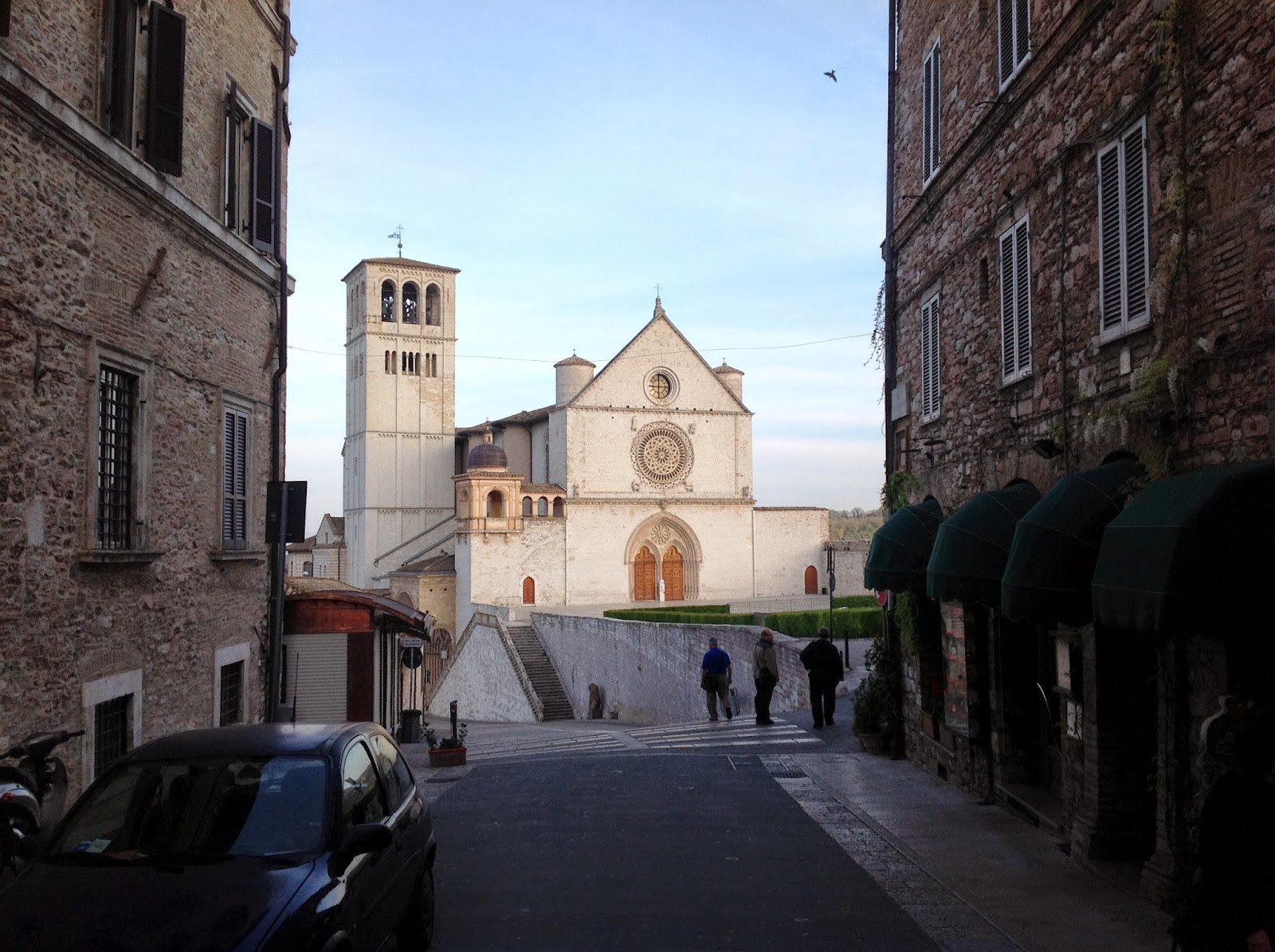 You may be wondering why I don't have more interior photos. That's because photography was barred most places -- officially, probably everywhere, but it seemed not to be taken seriously everywhere (that's how Italy can be).

And why is photography banned? Because camera flashes damage things. In theory, you could just say, "no flash" -- which some places I've been do say; however, I'm guessing some folks ignore that, so it's easier just to bar all picture-taking.

One of the sights I couldn't take a picture of was the incorrupt body of Saint Clare. Apparently, while her body has not undergone the normal decay of death (there's a miracle I'd like to hear secularists explain), flash cameras did damage her flesh. The damage is concealed, but thus the no-photos policy.

It's hard to do justice to three days in Assisi in a brief post. However, a few points:

> Francis was not the tree-hugging hippie he's often portrayed as being. For one, he was pretty intense about the Catholic Faith. He wanted people to know Jesus Christ in his Church, through the sacraments. And, yes, he was also about poverty and peace -- but his notion of peace was more about the freedom that comes from turning from worldly pursuits and fixes ones gaze on our Savior.

> While Francis was about poverty for himself, he did not despise or reject the good things of life. He enjoyed life and all good things that came his way. Poverty didn't mean not enjoying life; only choosing to take life as it comes, and focus on Christ, not stuff. When people gave him good food and drink to enjoy, he enjoyed it.

> Francis clothed himself in rags, but he didn't advocate treating the sacred things of our Faith that way -- as some advocate today. On the contrary, art and beauty, in worship, were seen as both fitting offerings to the Lord; and also, art that told the story of salvation was part of preaching the Gospel.

Well, that'll have to do. The bells are tolling, and I have to head over to church to hear confessions.
Posted by Fr Martin Fox at 3:17 PM

Father, thank you for the wonderful travelogue of your sabbatical trip!