I am (Father) Spartacus! (updated!) 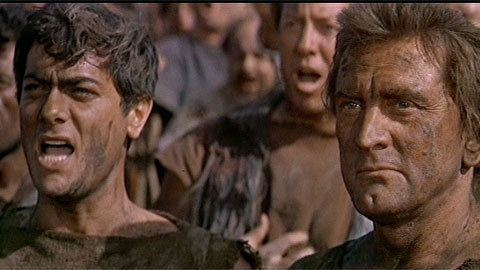 Surely you've heard of this? The mayor of Houston, was put out by people, including religious people, who circulated petitions to challenge a law she passed regarding nondiscrimination regarding sexual orientation. So she issues subpoenas, demanding texts of homilies, notes, emails, and other private papers from pastors who might have supported the petition drive. Note: after a heavy backlash, she's relented on the sermons, but she's still demanding other papers.

Time for a Spartacus Moment.

The pastors being harassed by the Mayor of Houston are 100% right if they refuse to obey the outrageous subpoena.

That said, I think every pastor, priest, rabbi, imam, etc. in the country -- not under subpoena -- ought to inundate the mayor's office with sermons. (Update) To be clear, this was the idea of Mr. Russell Moore of the Southern Baptist Convention (article linked above). Credit him.

She wants sermons? Send 'em to her, till she's elbow-deep in them.

I plan on printing out a slew of my sermons this week. 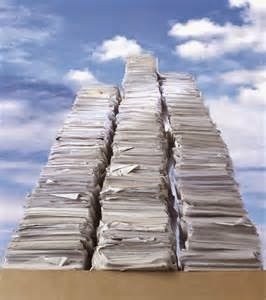 I assembled my packet of homilies and they are going to the post office today. A year's worth. Because my homilies are in BIG TYPE (so I can easily refer to the text at the pulpit), the package is somewhat bulky.

Here's the letter I sent along:

I have become aware that at your direction, the City of Houston has demanded, via subpoena, the sermons, emails, private papers and other notes and communications from area clergypersons who had the temerity to disagree with you. While I’m gratified that you have subsequently relented on the sermons, you are continuing to threaten private citizens, exercising their rights under the Constitution, with the hammer of the law if they do not surrender private papers of various sorts to your representatives.

I hope those individuals you have targeted defy you.

While I sincerely hope you realize how wrong your actions have been, and make a forthright apology, in the meantime, I thought I’d send along a year’s worth of my own homilies.

Some righteous civil disobedience is definitely called for.

Go for it, Father! What an appropriate response to a totally inappropriate (deranged?) demand!!

Did Her Honor subpoena emails from Imams? That should be interesting.

The problem will be that many of the pastors have taken Caesar's money and will find they are now, legally, his servants.

If the pastors are sending sermons, perhaps the parishioners too could send a postcard or two with some fitting gospel words of inspiration?

I think the Mayor of Houston should be buried in letters, post cards, petitions, and sermons. Pour it on!

I'll send my note to the mayor.

I'm sending her a copy of the Obamacare legislation.

You are a champ!