50 H.S. boys came to dinner with the Archbishop last night... 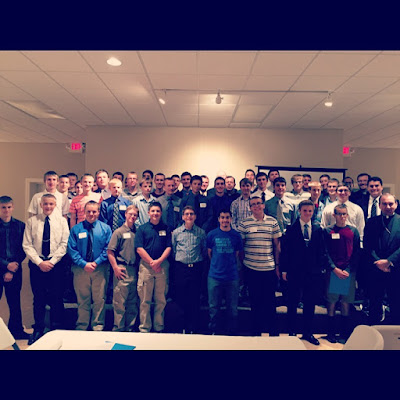 The event was an "Andrew Dinner," at Saint Remy Parish, arranged with the help of the Archdiocesan Vocation Office. The idea is to invite boys "to come and see" as Andrew invited his brother, Simon Peter, to become a follower of the Lord.

Who were these 50 or so boys? They were from many parishes around the area; but at least 30 of them came from our parish! In my years of attending these events, I've never seen such a large turnout.

What did we do to make this happen?

Well, I don't know all that the Vocation Office did ahead of time. I know that our vocation director sent me several letters, suggesting steps to take and reminding me, so I'm assuming he did similar things with nearby parishes.

What our parish did was:

> Schedule it on the same night as religious education (in cooperation with our director of religious education); that way, the boys had to be here anyway; the dinner simply started about 90 minutes earlier, and they got out a bit earlier. (As it is, not all our high school boys attended. I invited them, encouraged them, but did not compel them.)

> We promoted it through the religious education classes, at Mass, in the bulletin. I personally invited a lot of the boys. So did many of our parishioners. I know that many of the parents pushed their boys to come.

> Several of the boys promoted it themselves! They were recruiting other boys to come!

> We prepared a poster which I sent out to area parishes.

> And, we prayed. We have Mass every Thursday morning for the intention of vocations; and we encourage people to pray for vocations all day at exposition of the Eucharist.

Oh, and one more thing: the vast majority of the boys who came from my parish are altar servers.

Will any of these boys end up being priests? Who knows? But we currently have three young men in college seminary, and I know of four high school boys, as well as a out-of-college young man, who are interested. In any case, our vocation director explained, the point isn't that everyone of them has to become a priest; but that they ask, prayerfully, what is God calling me to do with my life? I tell the boys: I have no special gift for knowing who God is calling, so I invite everyone, simply to pray and think about it.

I might add...I think this outcome is both about something good about our northern parishes, where families are strong and the faith is more central. But I also think it has a lot to do with what we've been doing in this parish for many years: strong emphasis on teaching the Faith, strong emphasis on confession, on the sacraments, and on living our Faith, and on great care to celebrate the Holy Mass with reverence.
Posted by Fr Martin Fox at 6:38 PM

Thanks be to God!

Praise God! It is good to see so many young men coming to learn more about the priesthood. If you do not mind father, could I use the picture on this post?

Yes, if you link to this blog, that would be nice. Also, can you tell me where you're posting it?

Thank you! I am going to post it on my blog for an upcoming post about ministry. I will be sure to link your blog in the post.

Might you give us a link to your blog, so we can all visit?

Sure can! My blog is "Christ With Me, Christ Before Me". Thank you so much Fr. Fox!

It looks like they are being given a good example to follow. That is what makes it possible. Bless you, Fr. Martin Fox.