Sorry I didn't get pictures while preparing it, but here's the finished product fresh from the oven: 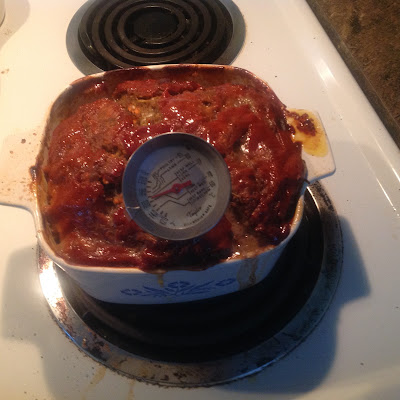 I used the same recipe as the last time, although I modified it, partly for preference, and also because I didn't have all the ingredients. This time I didn't have mushrooms, and I only noticed this time that it also called for green peppers! I learned my lesson this time, and chopped the carrots in the food processor separately from the other items. That worked well. To compensate for the vegetables I didn't have, I used more carrots and onion. I always like onion in meat loaf. As before, I left out the sugar. Instead of cayenne pepper, I used Franks. I also improvised on the "Italian herbs," because...why not?

Here's dinner on the plate: 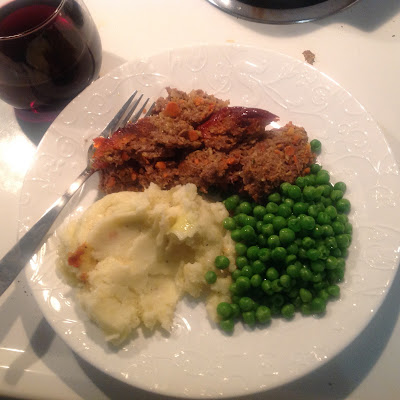 I had a potato in the cupboard, and nuked it, and mashed it with butter and cream; and the peas came out of the freezer. Nothing extravagant -- well, there is one thing. When I fished some packages of ground beef out of the freezer, I found a packet of ground sirloin (I think I bought it for burgers last summer). So this had a little better meat than usual.

This called for a fair amount of garlic; I think it could take more. Also, more onion, and the mushrooms would have been nice. I may try the peppers, but I can take or leave those. More basil and oregano wouldn't hurt. This time, I pulled it out of the oven on time, so that helps a lot.

I'll definitely make this again. Meat loaf is a great thing: I can easily get several meals out of this; it's easy to reheat in the microwave; and if I want, I can make a meat loaf sandwich just by frying some of it in a pan, and slap it between two slices of bread. It would have been easy to make two at the same time, and freeze one of them, which I've done on occasion.

Maybe next time, I'll cook it just a little less, and see if I can get a bit of pink? Wouldn't that be nice? 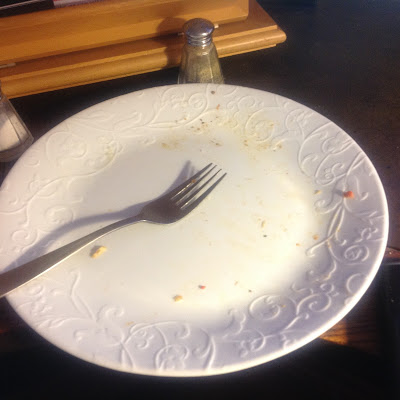 Dear Fr.,
Take it from your older sister who ate some pink ground beef a few years ago & got sick. What did you use bread or oats? I remember mom & dad always used the Quaker Oats recipe. I have used a recipe for the microwave & it called for bread (fresh) torn apart. I would use whatever I had, usually wheat or rye bread. It was pretty good, I forget what else used. If you want the recipe let me know. Take care, Eileen

This recipe called for bread crumbs. I've used oats before. I may try oats with this recipe, and see if I like it better.

Looks very good, Have you ever seen those meatloafs with a hard boiled egg in the middle? wats up with that grossness?

I've never seen that. I'm not sure what the point of it is.

Stuffed meatloaf is amazing! And it looks beautiful. You don't have to have a hard boiled egg. Meat and cheese in layers inside the meatloaf can be very artistic...I've seen this in Italian cookbooks. Love your cooking blog entries, Father! Thank you for sharing. :)

My recipe for meatloaf.....