This month, the St. Vincent de Paul Society is sponsoring another Casserole Crusade: they ask parishioners to prepare homemade casseroles, using recipes and pans the committee provides after Mass. Then the casseroles are collected two weeks later, and will be delivered to area soup kitchens.

I've taken some, and the last couple of times, I took four pans, and I challenged other folks at Mass to do the same.

So, today was the day to make the casseroles. I chose Sloppy Joes, using the recipe provided, times four:

First, I ran to the store to get my supplies. I got those things I figured I wouldn't have enough of at home. Later, I discovered my mistake...

Here is a picture of all 16 lbs of ground beef in one pan. I quickly realized that wouldn't work, so I got out another pan. 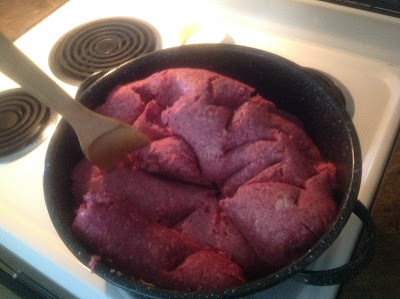 As the meat browned, I got my other ingredients together. I used my food processor to chop up the onions, which made me cry -- a lot!

As I'm measuring out the other ingredients in a bowl -- in between checking on the meat -- I discovered I didn't have enough catsup. So what to do? I decided I would use another can of tomato paste, of which I had plenty in the cupboard. That's when my cheap can opener decided to fail, after I'd opened one can, and half-opened another. So what to do?

I got out my old fashioned beer-can opener -- you know, the type with the pointed edge for opening juice cans. The result looked like this: 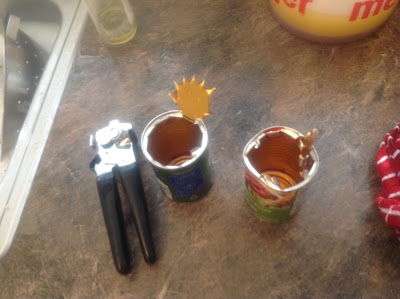 The cheap can opener was thrown away, with the rinsed out cans. (Then went in "recycling.")

As a result of this complication, It was a trick getting the tomato paste out of the cans cleanly, so I resorted to some water, and while the recipe called for it, I lost track of how much I'd added. I didn't want to make it watery, so I didn't add any more. In retrospect, I probably could have added more.

Anyway, here's the sauce, with all the other ingredients. 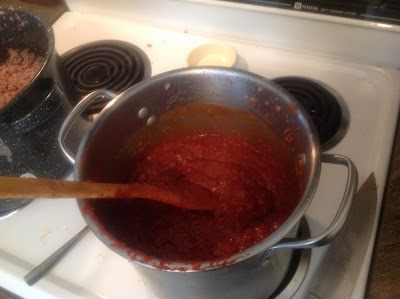 Here's all the meat (less what ended up on the floor, or in my belly!) 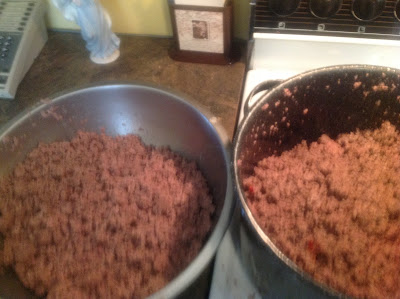 Here's the final product, portioned out in the pans (two more not shown). 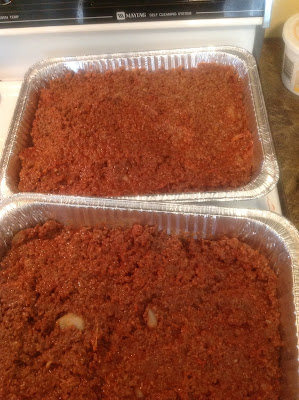 I put the lids on these and stuck them in the freezer. They have to be frozen solid when they are dropped off.

So, how did it taste? Pretty good, a little strong on mustard. I thought about adding some barbeque sauce, but wasn't sure -- including, how old that bottle of barbeque sauce was! Better to leave it alone.
Posted by Fr Martin Fox at 4:23 PM

That is a big dutch oven. I do the same thing: get my ingrediants all figured out and in a pan then it is so full I can't stir it or it boils over easily. Smaller batches and bigger pots are my puzzle.

I am also a big believer in pressure cookers.