This is one of my favorites, because's relatively easy, and I'm getting better at it all the time, it's delicious, and the leftovers are great.

This was Saturday night dinner (and Sunday lunch, and probably Monday dinner as well).

I started with a pan in which to brown the meat. This time, I used a giant Dutch oven. I put it on the burner and melted some bacon fat. (I always keep some bacon fat in the fridge and so should you. It keeps fine and adds that wonderful flavor.) 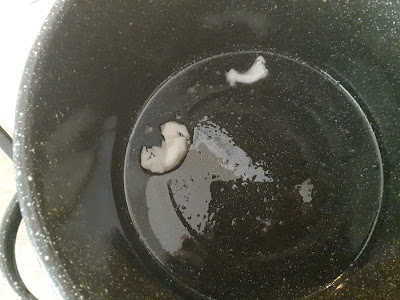 While the fat is getting hot, I dry off the chuck roast. See those veins of fat? That's what you want. That will make the roast juicy and tender and cause it to fall apart nicely. 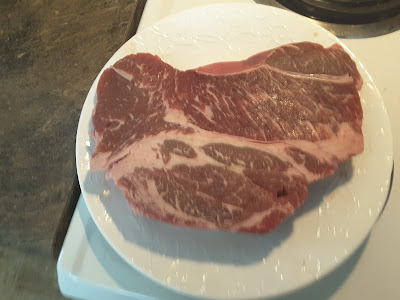 Then I coated the roast with garlic powder, black pepper and salt, and lots of it. Then I coated both sides with flour, about a teaspoon for each side. 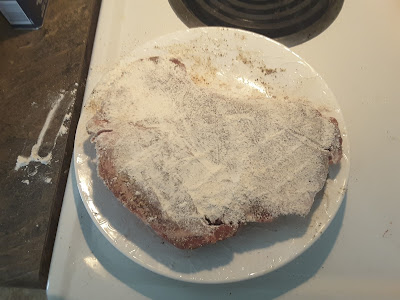 That went into the pot, and I browned it on both sides. While that took place, I chopped up a couple of onions, four carrots and four ribs of celery. When the meat was ready, I threw the vegetables in. In the past, I've transferred the roast to another pan, but this time, I decided to keep it in the Dutch oven. 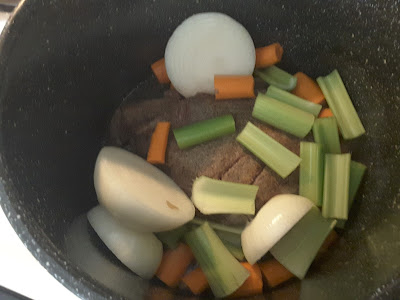 On top of this, I poured about a half cup of leftover white wine, and I had some leftover broth. Remember the sloppy joes I made the other day? That involved cooking up 16 lbs. of beef, yielding a lot of fat, and some broth. I saved the drippings and put them in the fridge. It was mostly fat, which I discarded; it was a little tricky chipping through all that tallow, but I did it, and had a nice bit of broth with only a little fat left behind; and who minds that? That got dumped on top as well.

This went into the oven set at 275 degrees, and I went over to church for confessions and Mass. About three hours later, it looked like this: 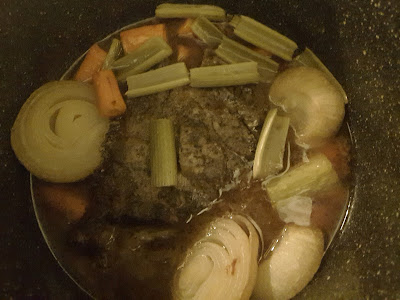 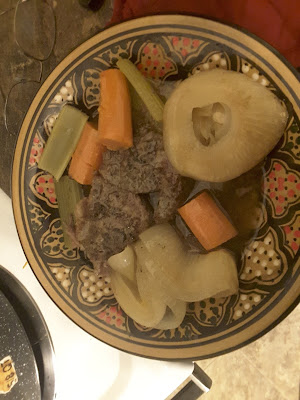 I opened some Merlot, and that tasted pretty good with it; I think I'd have liked Cabernet better.

Verdict? Delicious! Maybe my best pot roast yet! I decided to turn down the temperature this time, and I think that made the difference.

Again, this is easy, and it would be easy to vary it. Potatoes or tomatoes would work, and if you wanted a little heat, you could add some red pepper flakes. I added more salt when I ate it, but I like a lot of salt. It might also be good with spinach, except it would make sense to add the spinach late; I think it might not be so nice if it cooked for three hours.

If you want to make any suggestions, I'm all ears!
Posted by Fr Martin Fox at 12:01 AM

I bet the lower temp made the difference. It was sort of a braising effect and that yields wonderful meats.

Yes, that was my thought as well. I recently made a pork roast, and cooking it longer, at a lower temperature, seemed to make a big difference there.

For those who need to make a meal fast, a pressure cooker works great I use to do that for a great pot roast, I remember mom use to use the pressure cooker quite often, do you remember that Fr.?

I use the pressure cooker as a big time saver. My wife views it with suspicion and fear after some unfortunate episode with her mother as a child. As an alternative to a pressure cooker a slow cooker is awesome and can be a time saver if you plan ahead. Both will make tough cuts of meat and poultry fork tender.

BTW, we had a cabbage roll caserole tonight after the KofC meeting. Not too bad but could have used more spice.

Yes, I remember mom's pressure cooker! I've never used one myself, and I don't own one. It's not something I want to invest in, because I think it wouldn't get much used.

The bottom of the pressure cooker is a very beefy pot that can be used as any pot but is especially nice for simmering and browning since it is so thick. Mine was an inexpensive one from Meier that also came it a regular lid for regular jobs. It was made in India and also came with great little cookbook with curry recipes. Just as with cast iron skillet and dutch oven i think everyone should have one.