I've been cooking a bit more lately; mainly because, the other day, I got some items out of the freezer with the thought, "I've seen that stuff in the freezer long enough!" So, that meant getting out a chuck roast, and some ground beef, that was down at the bottom.

So, I figured I'd make meatloaf; but I wanted to avoid using bread or oats. So I went a-googling, and found this recipe, and decided to try it. Of course, I modified it: I used carrots and celery, rather than green peppers, because I had those on hand; and because I was in a hurry, I wasn't so careful about measurements.

Anyway, let's see how it turned out!

First I opened up some tomato paste and crushed tomatoes (no tomato sauce on hand), using my new can opener. It worked great, as you can see: 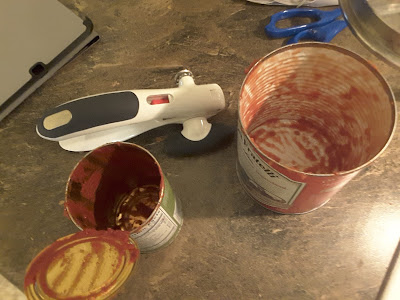 These went into the pan together, and I simmered them a little bit. The recipe didn't call for it, but I thought it would help the ingredients mix together better. Oh, and I didn't add any fake sugar, I didn't see any need for that. (Please ignore the spots on the stove top.) 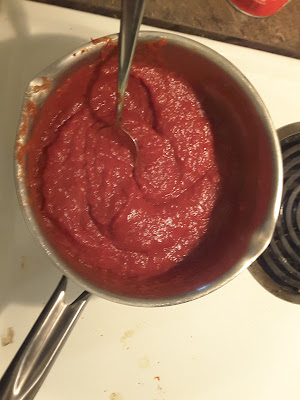 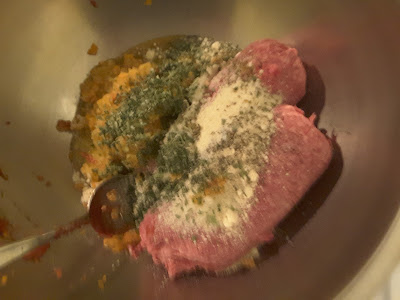 Next was to spread all this out on wax paper, thusly: 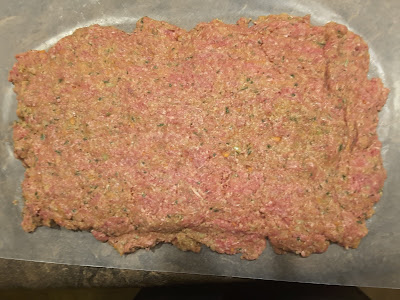 Over this went slices of ham and provolone. The recipe suggested prosciutto, which is hard to find around here. Instead, I got what passes for Virginia ham hereabouts (hint: the real stuff is so salty you have to soak it); when I laid out the slices, I realized I might have asked them to slice it thinner. 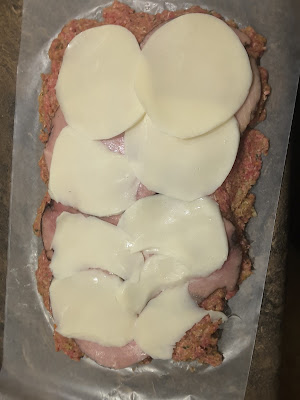 Now the hard part: rolling all that up, and then safely transferring it to the pan. It worked: 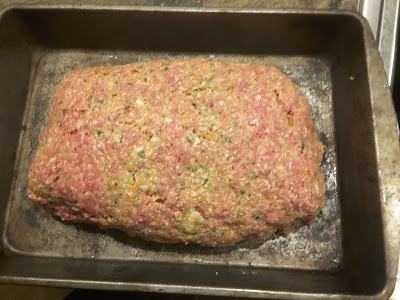 Over this I slathered some of the sauce I made: 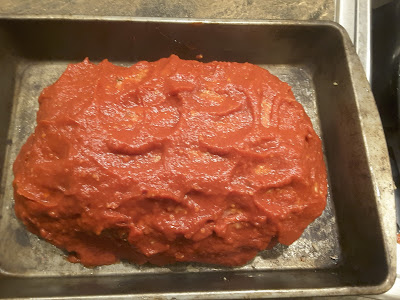 And that went into the oven, just before heading over to church for the evening Mass for All Saints. Because I knew I'd be back later than the time called for, I turned down the oven to 275 degrees. When I got back, I checked it, and it looked like this: 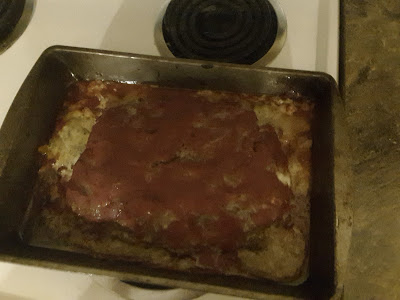 With cheese oozing out, I felt confident the insides were properly cooked, so I took it out, and drained off some of the fat. I let it cool a bit while I ran upstairs to catch a shower. After something cold to drink (it was unseasonably warm in Russia yesterday and today), I had a slice of this with some leftover red wine from the night before. Then I had another slice!

Verdict: Prosciutto would have been awesome, but this was very good. I'll be interested to see how it works when re-heated, however. I'm not sure just how "low carb" it is, with all that tomato sauce, but the flavors were very good. And it wasn't hard to make; it took about 30 minutes to prep, not bad!

I'm calling this meatloaf "briaciole style," because that's what it is; when I looked up how to spell "briaciole," I found other examples of this. Something to try another time!
Posted by Fr Martin Fox at 4:05 PM

You had me at "braciole". The best part is that it makes leftovers for several days that actually get better as time goes by.

The tomato sauce provides you a lot of healthy lycopene!