Project 88: getting up to present

Here's another post catching up to the present on "Project 88," my effort to visit each county in Ohio.

Let's pick up with Preble County, since I did indeed pass through there yesterday. I thought of visiting Heuston Woods again, retracing the steps of my family back in 1974, when my parents got together with my aunt and uncle, combining a 25th wedding anniversary with a 24th, and throwing a "49ers" Party, to which all manner of friends and relatives came. But I'm not sure I would have found the same shelter -- if it's even still there -- and I didn't want to take the time.

I'd been at Jungle Jims and picked up several items I can't get anywhere else, including some interesting varieties of olives and cheese. So those items were warming up in my car, and I was expected at home around 5, so no time to go traipsing around the state park. Instead I drove straight up U.S. 127 from Fairfield through Hamilton! (sic), one of the largest cities in the U.S. to be completely bypassed by an Interstate highway. North of Hamilton, things were rather sad looking. My first stop was Camden, where I noticed this architectural juxtaposition: 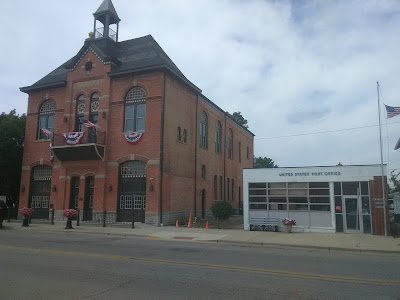 I got back on 127, and headed to Eaton, the county seat. A sign directed me to an old bridge, so of course I turned; then I saw this. I was too lazy to get out of my car, so it's a little far away; but if you blow it up, you'll see who built it and when on top of the bridge. 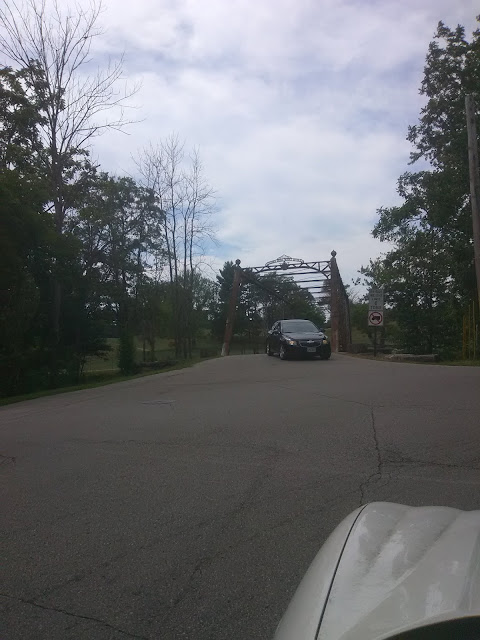 Turning right, however, I came upon this bridge, which is the really old one. Then I snapped a picture of the river and the dam; the dangling fingertips are a nice touch, don't you think? 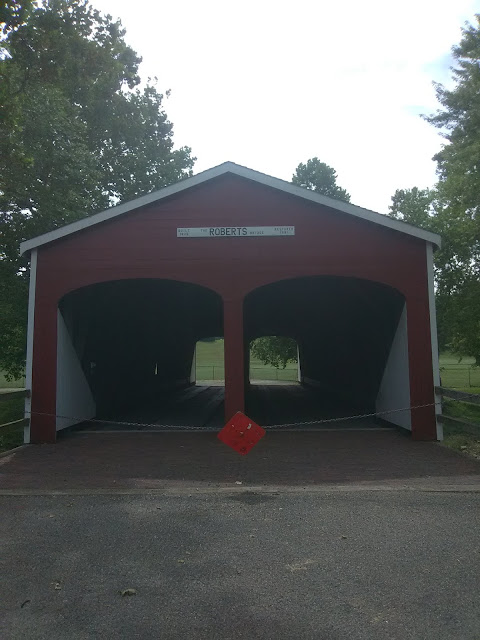 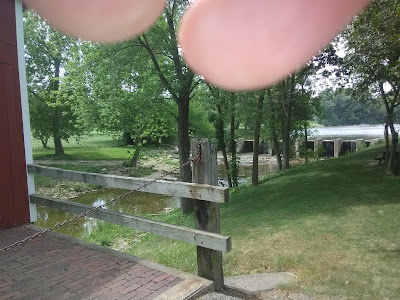 Now let me backtrack and give a little history of prior years' visits to counties. My first visit to Miami County was in 2000, when I was assigned to Saint Boniface Parish in Piqua for an internship as part of my seminary training. At the time, I had no idea where Piqua was. But I would continue to be associated with Piqua from that point on, first as a seminarian for several years, then as pastor of Saint Boniface in 2005, and of Saint Mary in 2006, until I was reassigned in 2012. Here is a recent interior photo of Saint Mary, from the parish website, followed by what Saint Mary looked like long ago. I don't have a photo of St. Mary in its wreckovated state, but it's current look is almost entirely due to my predecessor. 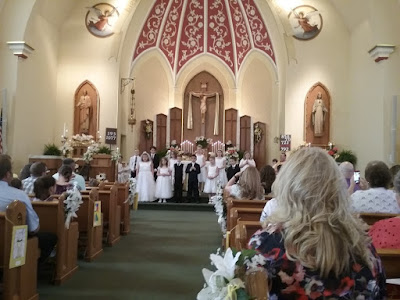 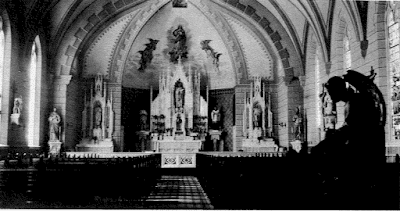 Here is a current interior shot of Saint Boniface, courtesy of the Facebook page, followed by what it looked like when I arrived, and what it used to look like (the latter two images from the parish website): 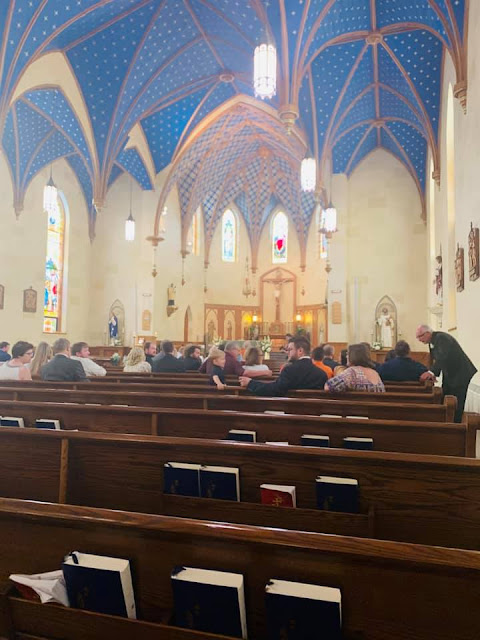 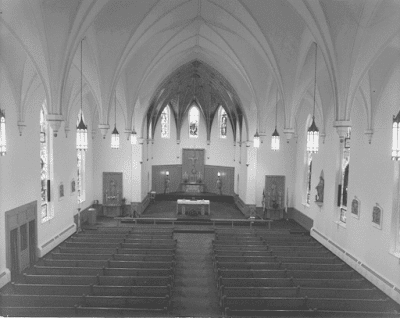 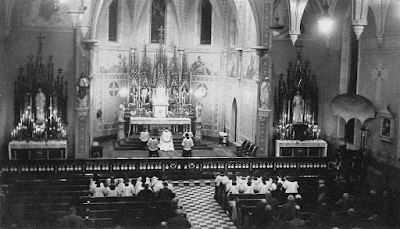 I'm not certain, but my first visit to Champaign County was when I attended a funeral at Sacred Heart Church in St. Paris. My first visit to Darke County was likely whenever I ate a meal at the Inn at Versailles (pictures at the link), which continues to be a favorite place. Friends from Cincinnati come up each year for the Minster Oktoberfest (oops, I just slipped into Auglaize County!), and they stay at the Inn. Last year I missed their visit because of a pilgrimage to Italy; I hope to be with them this year. Darke County is also home to the notable Annie Oakley. I've visited Shelby County lots of times; but of course, I live here now! While I'm in the neighborhood, let's mention Mercer County, where Maria Stein is located, the home of the motherhouse for the Sisters of the Precious Blood, better known as the Shrine of the Holy Relics. Somewhere I read that Mercer County drinks more beer than any county, and I believe it. I'm not sure when I first visited Logan County, but I just recently visited, on the way across the state to Wheeling, when I toured the Ohio Caverns (pictures at the link).

Many times over the years my family visited Lima, in Allen County (I was recently there again, but I will mention that in a later post). Franklin County is the location of our state capital, Columbus; I recall being there in high school in the late 70s when I was part of a mock state legislature, organized by something called "Hi-Y," now called Ohio YMCA Youth in Government. That was insanely fun; we pretended to be members of the legislature, attending committee meetings and sitting in the actual seats where the legislators sit. One year I competed to be the Speaker of the House. The way it worked was that the other candidate and I picked a bill to have on the floor for debate; and we were supposed to manage it, thus showing our abilities. Alas, I picked a boring bill and nothing much happened; my competitor picked something really interesting, and lots happened. He also went second, and folks were warmed up.

In 1980, I went up to Cuyahoga County for the famous debate between President Jimmy Carter and Governor Ronald Reagan. I wasn't in the same room, but in some adjacent area; but we did get to see Governor Reagan afterward, and I think I shook his hand. I wasn't astute enough to realize how pivotal that debate was.

Sometime in college my frat brothers (Sigma Alpha Mu) and I made a road trip to Ohio University -- so that got me to Athens County. While in the seminary, another seminarian and I made a trip up to Cedar Park in Sandusky, which is in Erie County. Along the way, we stopped at his alma mater in Tiffin Ohio (that checks off Seneca County). At some point, I visited the Shrine of our Lady of Consolation in Carey Ohio -- that's Wyandot County. In preparation for, I think, ordination to the diaconate, my classmates had an unfortunate retreat at a retreat house in Fremont, Ohio; that's Sandusky County. I attended an ordination, I think, at Our Lady, Queen of the Rosary Cathedral in Toledo, in Lucas County. Finally (for this post), I attended an ordination and first Mass for a priest from Youngstown while in the seminary; that brought me to Mahoning County.

That brings me to 26 counties, prior to my recent efforts, which I will begin filling in with a subsequent post.

EDIT: No, I forgot to account for all the "drive through" counties, which I'll do quickly. Accounting for the various places I've driven to in Ohio, that means I've passed through:

Hancock -- home of Findlay, Ohio and Marathon Oil. I must have gotten gas here at some point, driving up I-75, but no memory of it.
Clinton -- it's on the way to too many places I've been; I had to drive through!
Highland -- I've driven through here on U.S. 50, heading to Virginia when I used to live there.
Adams -- There's a village of Seaman here; I got a speeding here once; I remember that!
Pike -- Also along U.S. 50/S.R. 32.
Vinton -- Again, along U.S. 50/S.R. 32.
Jackson -- Still part of the S.R. 32 story...
Meigs -- S.R. 32 gets a little corner of this county.
Washington -- I'm pretty sure I've gotten out of the car in Belpre, as I passed through there many times when I lived in Virginia and drove back and forth to Cincinnati; and after I moved back to the Queen City, and returned to Virginia.
Ross -- Both U.S. 50 and U.S. 23 intersect here, so I've got it covered both ways.
Lawrence -- I passed through Ironton one time.
Union -- U.S. 33 passes through; I know I've driven this route to or from Columbus.

And that brings me to 56 counties, visited or driven through. But wait, there's more! In my next post, I'll describe some travels in the past week or so.
Posted by Fr Martin Fox at 3:04 PM

I hope you'll let us know if you plan to be in Delaware County! St. Mary's in Delaware is a lovely church. Delaware is the birthplace of Rutherford B. Hayes (the location is now a BP station downtown), and just outside of town is the Meeker homestead, the home of the Delaware Historical Society. The barn there has some kind of designation as Ohio's official architectural structure.

How nice to see you again, Mrs. Darwin! As a matter of fact, I have tentatively planned a couple of ventures that would take me through Delaware, one of which would be a two-day trip, visiting Union, Delaware and Knox on a Sunday afternoon, and then Richland, Morrow, Marion and Hardin the next day, bringing me more or less back toward home. In August, perhaps? Is there any special event coming up in Delaware worth working around?

As I continue to think about it, I may even come through Delaware this coming Monday...plans still in flux.

An excellent idea to document your travels!

My wife and I have recently begun again traveling around the state. I've found a bit of research helpful and keeping general goals in mind when planning your trips. Things we look for are indian mounds, historic sites, famous people, festivals, old time tourist oddities, beautiful architecture.

A couple of weeks ago, we visited the home/museum of Gen. William Tecumseh Sherman (Lancaster, Ohio), saw the house of Gen. Philip Sheridan (Somerset, Ohio). While in Somerset we also visited St. Joseph's Catholic Church the first Catholic parish in the state, still run by the Dominicans. We passed thru Bainbridge, Ohio, stopped by the Amish bakery near there for lunch. Tried to see a set of indian mounds in the Chillicothe, Ohio which we hadn't seen before. Late in the day we turned south again and visited Shawnee, Ohio and talked to some of the people there who are trying to keep their town alive. A long day. From our house it should be about 2 hour trip to Lancaster, Ohio. But because we like the scenic routes and stops along the way, it took us 5 hours. This fall we'll head north west again to your part of the state to visit the Garst Museum in Greenville and visit the
Fort Loramie Historical Association museum (during the Fort Loramie Octoberfest).

Fall festivals are a great excuse to get out and see the state.