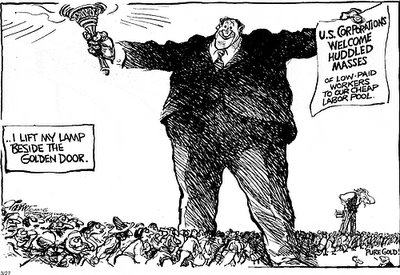 TechCentralStation, run by James Glassmann, always has something interesting on both the well known issues of the day, and subjects that don't get much attention, but ought to.

Here's what Arnold Kling said there today. I highlighted the sections most interesting to me:

"I believe that illegal immigrants bring relatively little economic benefit and cause relatively little economic harm. I believe that there are substitutes readily available for the work done by illegal immigrants. Legal residents could do some of the work. Other labor could be replaced by capital or by alternative production techniques. By the same token, because there are many substitutes available for unskilled labor, the salvation of American workers does not lie in immigration restrictions.

"My prediction is that effective restrictions on illegal immigration would cause a shift in the location of unskilled labor, but not a meaningful long-term change in real wages. In the short run, wages for unskilled labor would rise in the United States. This would cause more manufacturing plants to relocate outside the United States, driving wages back down. Compared with the situation today, the net effect of immigration restrictions would be to shift some Mexican workers out of service work in America and into manufacturing work in Mexico. Within the United States, the reverse would happen: legal residents would lose manufacturing jobs more rapidly, and hang onto low-wage service jobs longer. I do not think that these economic effects are important.

Now of course, I am not saying Mr. Kling is right; but if he is, doesn't that suggest a social-justice reason we should have stricter immigration regulations -- to facilitate improvement in Mexico (and by extension, other countries where the immigrants come from)?

It has occurred to me that the unaddressed issue is that the countries where these folks come need development and opportunity; and the politicians there see this out-migration as a way to avoid the real problem.
Posted by Fr Martin Fox at 7:20 PM

Mr. Kling doesn't think that manufacturing jobs leaving the US, with mainly the lower (much ) paying service jobs is not economically important.

Then, it is obvious that he has never worked in an industry that supports manufacturing. I am working in that area. And it stinks.

Because you see decent paying jobs just disappearing. Not only for myself, but for many, many others.

And even Mexican factory jobs are leaving for China. Which means that they are still poor, and have a humongous environmental mess to clean up (or to live and die with.)

Well, it's not for me to defend Mr. Kling, but my guess is he wasn't suggesting its not a trauma; he's addressing the overall impact on the economy of some jobs destroyed, others created.

What I found so interesting was the idea that immigration barriers would result in more industrial and manufacturing jobs in Mexico; i.e., the American manufacturers who rely on illegal immigrants coming here, would have to go there.

The bigger issue with the illegal immigrants isn't going to be the manufacturing jobs. Having lived in CA all of my life I can tell you it will be the service industries. Can you outsource a factory to India, yes, you can't outsource farm labor to pick fruit or clean a hotel.

The part that nobody wants to talk about is that much of the unemployment for people without a high school diploma is due to illegal immigration. It's going to be cheaper, always, to hire someone who your either pay under the table in cash, or someone you don't need to pay benefits like Social Security on. Someone with a Social Security number has all sorts of costs associated with them that an illegal immigrant doesn't have.