The Humanism of Norman Rockwell 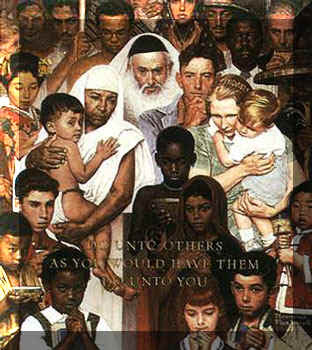 Today I stopped down to the Dayton Art Institute to see the Norman Rockwell exhibit, which goes to February I think. It cost $16, for which I imagine I could have browsed the rest of the museum; but I was ready to go once I'd been through the special exhibit.

I heard about this via the principal of Piqua Catholic; our kids were scheduled to go, and I was going to join them. But as often happens, I got busy and forgot. Had I gone, I'd have liked to help the kids see the humanism of Rockwell--his reverence for the human being and all we experience. There is something very Catholic about this Yankee Protestant artist whose artwork didn't betray much explicit religiosity.

Rockwell was--and I think still is--scorned and diminished as a mere illustrator; he spent his life creating artwork that appeared in magazines and advertisements. His famous covers for the Saturday Evening Post were constrained by the wishes of his employer. They tended to be sedate and whimsical, seldom edgy, and even then, only several decades along. They were overwhelmingly white, Waspish and middle-class--to some degree, at least, expressing the culture of the magazine.

Is this why he is dismissed? If so, I might point out how many great artists created their masterpieces for pay.

Is it that his work is not terribly original? Or that he lacked technical proficiency? I can't believe the latter. I am no art critic, but I find many things in his work to admire: his use of color, light and shade; his ability to convey so much emotion--and to tell a story. As the plaques the Dayton Art Institute placed near his works pointed out, his works seem simple, until you look more closely.

Its hard to recall everything, but there was one--which the accompanying sign said was unpublished--entitled (if I recall correctly) "War News." Four men in a diner. The cook/proprietor nearest us, his face turned away from the radio, but not toward us--he is glancing perhaps to the grill, or the door, or the cash register, or another customer out of view. But his face shows he is listening to the radio. The other three men are customers on the other side of the counter. Two men are older--the sort of men likely to be home during World War II. The third customer's face is obscured, but the features that are visible suggest a young man, and he is in uniform. I took him to be a soldier, perhaps on leave, or perhaps about to ship out. Everyone's body language shows interest. No joy; no fear exactly, but anxiety--and some signs of hope.

All our wars in my memory were such that I neither knew anyone in them, nor did I reasonably fear the outcome. In my time, war dispatches were watched on TV or read online. I cannot personally describe listening to the radio, in the context of a war which our nation might lose. Yet that is what this work depicted--and I, at least, felt it.

The written descriptions accompanying the artworks said that the Post had a policy that "people of color" could not be depicted, except as servants. If so, that is shocking--and revealing of a different world from what we know. Is Rockwell to blame for going along? Did he fail to be more prophetic? Well, let us consider this.

I noted one painting, of a boy on a train, dressed very nicely--suggesting some wealth. He is travelling alone, perhaps suggesting he is a sort of little prince. He is looking at the bill--the accompanying caption said he is figuring out the tip. Nearby stands a waiter--a tall, strong black man--who gazes down upon the boy, smiling. Supposedly he is the inferior.

Yet while he smiles and is at ease, and shows human concern--he is ready, it seems, to help the boy if asked; the boy is frowning--more out of uncertainty than disapproval--and does not seem even to notice the black man. Rockwell is sometimes diminished as an illustrator of a "Leave it to Beaver" idealization of American life. So what is this? Am I the only one who hopes the boy will notice the man, and look up to him? Is that a projection into the work--or is there something in what the artist tried to convey that evoked that in me? What do you make of the fact that I am 60 years removed from the work--and a wider, cultural gap yawns between my world and that which first viewed this work--and yet it communicates so powerfully to me? Is that not art?

Again, I am no art critic; however, I suspect Rockwell was dismissed to some degree at least, because he went against the fashion--as defined by the highbrows at least. Most of the trends in 20th century art go totally contrary to where Rockwell went.

An example: in the exhibit were two portraits: of General Eisenhower and of Senator John F. Kennedy. And I noticed each featured the same device: the faces were illustrated with sumptuous detail, while the clothing was barely there. Just enough to frame the subject. It was as if the artist was saying, "let me focus your gaze on what's really interesting--what's truly revealing. And so he did.

Now, something fascinating happened after I had finished the exhibit. In the last room--where all the covers of the Post created by Rockwell were shown in succession--were comfortable couches, where several folks were relaxing. After I finished looking at the artwork, I took a seat and prayed my office. As I did, I looked up at the folks sitting in a couch catty-cornered to me--and it took my breath away.

A grandfather (I suppose) and three boys, all clearly brothers, ranging (I would guess) from 16 to 8 or 10. The grandfather's (nearest to me) head was down, eyes closed. He was napping. The older boys--furthest away--were leaning back, looking bored or tired. And the youngest was leaning forward, his back and face arced upward, gazing intently at something in front of them. All this was in profile to me.

It was a scene straight out of a Rockwell painting. As I studied them--until I was noticed and looked away politely!--I could see exactly the sorts of details Rockwell himself brought out in his works. The fascinating, appealing details of ordinary human life. Nothing exalted--except that simply being human, being alive, is truly wonderful. I consciously tried to remember what I saw, so I could describe it to you, and not forget what happened.

Now, contrast that with so much of the art of Rockwell's time--before and during--in which the human being becomes fuzzy and blurred; then becomes blobs of color or reduced to mechanisms; until the human being disappears altogether. (Look up "Nude descending a staircase" to see what I mean.) Meanwhile, Rockwell, who could have depicted anything he liked, found nothing so interesting to show us as the human being.

Which world view feels safer for your future?
Posted by Fr Martin Fox at 3:21 PM

We are heading up to see the exhibit on Wednesday. We have been to his museum a couple of times in New England and his house and studio. Both my husband and I love Rockwell and agree completely with your wonderful post.

How long did it take you to go through the exhibit?

Forgot one thing. We went down to the Cincinnati Union Terminal with Grandkids today for the train exhibit and as we went through the Cincinnati history exhibit on the way, we were going through the war years. In that exhibit is a big board with various catagories of people and where and how they could serve in WWII. It had men, caucasian and ages, and the later colored men who clearly had to serve in "segregated" units. Few remember how it was or how far we have come in a very short time frame on the issue of race. We took some time to talk about this to our grandkids mentioning that coney island did not integrate until the late 50's early 60's and then it was about 5 more years before colored were allowed into the swimming pool. Washington DC was segregated until Eisenhower. FDR refused to support the anti lynching law being proposed because his Democratic Party refused to back it and he needed their votes to keep power. Many are surprised by our recent history. Our grandkids were under the impression that the Democratic Party was the party for African Americans and did not know that Republicans had freed them, Republicans had introduced the amendments 13-24-15 to give them protection. Republicans had introduced civil rights legislation and anti lynching legislation. The did not know that 99% of the KKK was made up of Democrats or that those holding power to put those fire hoses on the blacks they have seen were Democrats. The history of race in this country has certainly been hijacked and very poorly taught in our schools. We had quite a crowd of people around us by the time we finished our short history lesson as the old grandfolks.

I found it interesting your observation about the Saturday Evening post and this history lession at the museum.

I think it took about 90 minutes to go through the exhibit, give or take.

What a nice, thought-provoking article. Thanks! This is a great blog. I came across your site through the Hermeneutic of Community site, which I came to in my search for a book by Pere Croiset on the Sacred Heart of Jesus (which I still can't find!). I have actually been to your St. Clare Chapel. I live in Troy, but we don't have exposition there - wish we did! Maybe someday!

I'm sorry I just found this post now. I love Norman Rockwell. Sure he idealized things sometimes, but he was a fantastic illustrator. I think illustrators as a whole are underappreciated. An illustrator tells a story, and shows us a part of life (real or imagined) that communicates something. Like your story of the grandfather and grandsons, life is full of "Norman Rockwell" moments -- and if people choose not to see, communicate or celebrate them, that doesn't meant they aren't there!!!! I am tired of elite "communicators" who despise the normal and wholesome and good.