Where the Christmas Tree came from 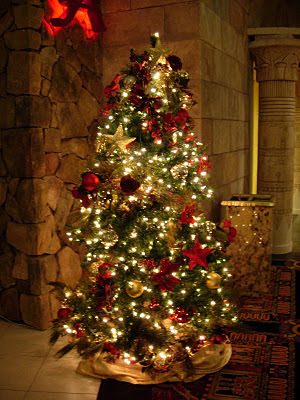 (This is a talk I gave today to the Piqua Kiwanis Club, of which I am a member.)

By now, if you put up a Christmas tree, you’ve already got it up. Actually, I have not! But I like to put it up this week, for reasons that will become clear shortly.

In any case, I bet you have heard different stories about the origin of the Christmas tree.

Some of you have heard the Christmas tree was a pagan thing that Christians “baptized” at some point--meaning they converted it from having a pagan meaning to having a Christian or at least innocuous meaning.

Some have heard that there is some connection between the Christmas Tree and Saint Boniface, who brought the Gospel to Germany.

How many simply have no idea where it came from?

In order to explain it, I have to explain something most people don’t know.

The Catholic Church assigns a day on the calendar for every saint, including saints of the Old Testament. So the Prophet Elijah is considered a saint, and his day is July 20. Moses’ day is September 4.

You may not know that Adam and Eve are also considered saints. Do you know what their day is?

Now, I don’t know why December 24 is their day, but I would guess--and it’s only a guess--that it was done precisely as a lead-in to Christmas.

So let’s go back in history to approximately the year AD 1200. Let’s land in Europe, where many, if not most, of our ancestors came from, and where the search for the Christmas Tree takes us.

Remember, in the year 1200, there are very few books, because books must be copied by hand, which is time consuming and expensive. That’s why people didn’t read. It would be like saying, did you know in the year 1980, no one knew how to twitter? It’s true!

So…how do you teach people the Faith in those days? Well, you do what I bet Pastor Wells often does at his church--and we do in ours--we organize plays.

Just like today, a community would have celebrations through the year. What do we do in Piqua? We have festivals and parades and folks love to come, particularly with their kids. Some things never change.

They would do the same, but instead of Memorial Day, Independence Day and Labor Day, they would gather on saints’ days and feast days. If they didn’t come into town to attend church every week, they’d come then.

And these would be great occasions to have plays to teach people the Faith. The plays would take place in the church, or the public square--and, naturally, they would be fun occasions for everyone to come together.

So, we’re in our time machine; let’s land in Germany--and imagine showing up for one of these plays; maybe some enterprising businessperson--like Peggy H____ or Gretchen R___--those are good German names!--is out selling bratwurst und streudel to feed the folks who came to the festival!

So here we are in December. And the mayor of the town--or the pastor--is organizing the celebration n of Adam and Eve day, December 24th. I’m not guessing about this, we know they did this.

But imagine you’re the person who is in charge of the play. The pastor says, “we need props for the play!” If you want a props for a play about Adam and Eve, what would you need?

How about a tree? What sort of tree are you going to find--that’s not bare--in December?

Now, it is true that the story of Saint Boniface connects here. Saint Boniface, in preaching to my ancestors running around in the Black Forest, confronted those who worshipped trees. And when he saw them worshipping a mighty oak, he took an axe and brought it down, and said, “how stands your god now?” The story goes that because Thor didn’t strike him down, my great-great-great….grandfather and his brothers all listened as Boniface told them about Jesus Christ. And, the story goes, a fir tree sprung up in the place where the oak was felled.

So some claim that this is how the fir tree was involved; the trouble is, I don’t have any evidence for that. But we do know they had the plays; and we do know that, in December, in Germany, no other trees are green.

Fruit? Why would you need fruit on this tree?

Now…Pastor Wells can tell us, what does Genesis say is the type of fruit on the Tree of knowledge of Good and Bad?

So, what fruit might you find in Germany in December? Well, nothing on trees, of course, but maybe in a basement? How about apples?

You may also be interested to know that in Latin--the Scriptures were in Latin then--the word for "bad" (as in "the tree of the knowledge of good and bad") is "malum"; and the word for apples, is "malum."

So while those are guesses about how apples came to be chosen, we do know apples were placed on the tree.

They also placed another decoration on the tree: discs of bread.

And what they were attempting to teach was about the Eucharist--holy communion--being a sharing in the death of Christ; who, remember, died on a “tree”--it was Saint Paul who called the cross “a tree.“

Over many years, these plays were performed in Germany, but along the way they got out of hand--hmm, a play about Adam and Eve, with forbidden fruit? How could anyone take that the wrong way? So Church authorities called a halt to the plays. But folks liked the "Paradise Trees" so they continued setting them up--at home.

Now at this stage, the decorations gradually change; there are different stories about when glass ornaments came along--either in the 1500s or the 1800s. But what seems to have happened was that other fruit or nuts were placed on the trees, and along the way, the discs of bread were replaced by cookies. I’m curious: who here has, or has seen, cookies-baked to be very hard--as ornaments? How about fruit-shaped ornaments? I bet some of you even have apple-shaped ornaments; I have.

Who knows the story about the lights on the tree? The story usually told is that Martin Luther added candles; I couldn’t find any source for that, but I don’t have many Lutheran sources! My mother, who was born in 1914, remembered candles from her childhood. Has anyone here ever seen real candles on a tree?

So, with all this information, I think we can answer the claim made by some that the Christmas Tree is something pagan. It is not; it is Christian and Biblical--meant to point back to Adam and Eve, but also to Christ, and the Cross.

And when you enjoy looking at your Christmas Tree this year, think of the passage from Revelation, that describes the New Jerusalem, the City of God, with no sun or moon, because the Lamb is its light; and in the center, along the River of Life, is the Tree of Life, giving twelve kinds of fruit all twelve months of the year.

Sources:
“In Defense Of The Christmas Tree,” by the Very Rev. Daniel Daly, published in The Word Magazine, December 2002; accessed online at:
http://www.prescottorthodox.org/2010/12/in-defense-of-the-christmas-tree-2/.