'It's not [only] about Mary' (Immaculate Conception) 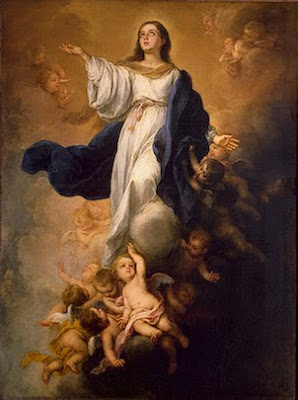 We often speak of the “mysteries” of our Faith.
There is a “mystery” in this particular Feast we celebrate today;
a “secret” that I’m going to share with you— that I hope you will try to reflect on.
Here’s the “secret”—are you ready?

This feast—of Mary’s immaculate conception— is not about Mary.
Or, I should say, there’s a lot more it’s about.

The first reading tells you this.
It reminds us of the moment, untold ages ago,
when the enemy of souls induced the human race to choose sin the first time.
That is when humanity was corrupted; shipwrecked.

Saint Paul, in his letter to the Romans, tells us that when humanity became corrupt,
it wasn’t just the human race that was damaged; all Creation was changed.

So the first thing this feast is about is sin: the infection that,
once it contaminated humanity and Creation, made this is a different world.

The second part of the mystery this feast is about is God’s plan.

If you listened closely, in the first reading, God said:
“I will put enmity between you and the woman, and between your offspring and hers;
he will strike at your head, while you strike at his heel.”

At the very beginning, when humanity fell, God already was planning his response:
There would be another Eve, and her Son would do battle with the enemy for our sake.
That second Eve is Mary.

Now, there is a point of confusion.

The conception we celebrate today is not Jesus’ conception in Mary’s womb.
Do the math: how could Jesus be conceived on December 8, and born on December 25?
Jesus’s conception is celebrated on March 25: nine months before Christmas.

Today we celebrate the conception of Mary, in the womb of her mother, Ann.

Just as God created Eve without any stain of sin,
so he intervened to ensure that Mary, the Second Eve,
would also have no stain of sin: immaculate.

Although Jesus is the one who truly does battle for us—on the Cross;
in a real way, Mary also did battle for us.

So many things to notice here!

Notice that what happened in Mary was God’s doing:
God is the one who prevented Original Sin from touching her.
So when we talk about God’s grace saving us— not we ourselves—Mary is exhibit A!

Mary being conceived without sin wasn’t absolutely necessary—
God could have found another way— but it was entirely fitting and appropriate.

And how right that Mary, who would be the first to accept Jesus as Savior,
would be able to respond with perfect devotion— because no shadow of sin held her back!

As Saint Augustine said, she who conceived him in her womb,
first conceived her in her heart through faith.

I said at the outset that this Feast is only partly about Mary.
It’s about Jesus of course; and it’s about us.

When we see Adam and Eve fall, we cringe; because that’s our story.
Well, when we see Mary, full and radiant with grace,
our hearts surge with joy—because that’s our destiny!
Mary—all the saints really, but Mary above all— is a like a mirror:
We love her, among other things, because of how perfectly she reflects the glory of her Son.

And we are filled with hope, because we see in her what we can be.
All we have to do is say “yes.”
Posted by Fr Martin Fox at 8:00 PM

As a former protestant, I had struggled with this teaching, until a late Sunday evening homily at a church in Joplin, Missouri. The priest reminded us about the angelic greeting "Hail, Full of Grace...", and it finally dawned on me; Mary was "full of Grace" BEFORE Jesus was conceived, not just while He was carried in her womb! I suppose that isn't a revelation to any cradle Catholic, but it certainly was for me. --- Rosemary

I'm a "revert" and I, too, had to be convinced of the Church's beliefs about Mary.

Later, I came to see that the Church's understanding about Mary makes sense in light of one salient fact: Jesus truly is human; and he loves Mary with the heart of a true human son.

Funny College Stories said...
This comment has been removed by a blog administrator.
December 12, 2011 at 7:05 AM