OK, I have pictures this time!

The seminarian is with his family, so I'm cooking dinner for myself. I had some catfish fillets in the freezer, and this time, I remembered to get them out in time (barely -- I had to set them on the counter for about an hour, and they were still icy when I started cooking).

I started with a beaten egg, with a generous amount of Frank's Red Hot added. (Not enough, it turns out; not nearly enough!) And beside it? You can't make it out, but that's white corn meal, with some black pepper added. (The coffee is there for tomorrow.) 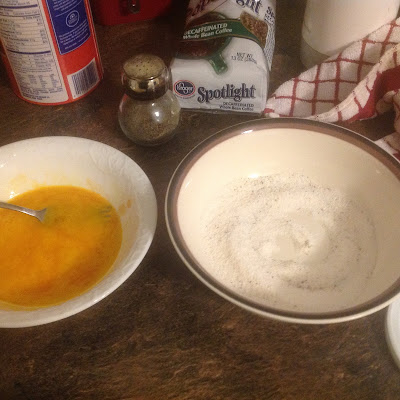 I dredged the fillets in the egg mixture; then doused them with garlic powder, before dredging them in the corn meal. 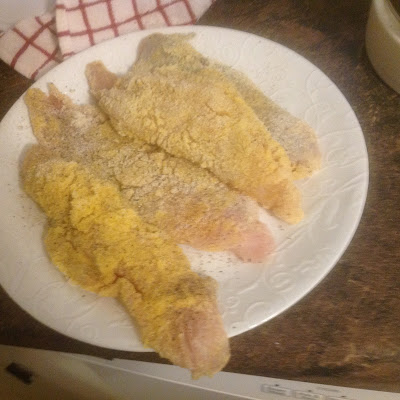 Meanwhile, I put some bacon fat in the skillet and got it bubbling. When I had the fish ready, they went into the hot fat -- but not before I sprinkled them with some paprika, just for color. 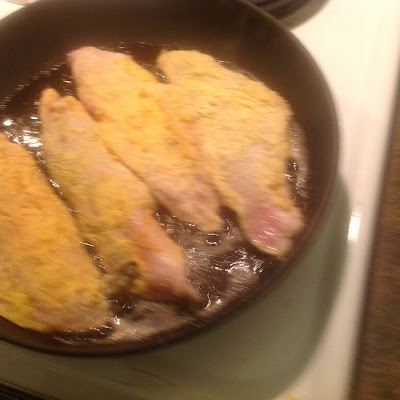 I cooked them till a light brown. At one point, I added some more fat. (That dark blotch on one fillet is a bit of the bacon that was still in the fat. It should taste great!) 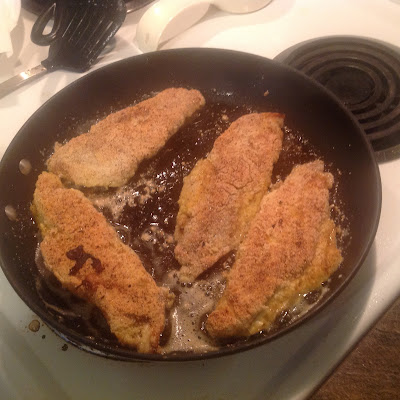 Here are the finished fillets. I think I could have cooked them a bit more, but I can't stand overcooked fish. Fish is one item I tend not to get just right; either over- or undercooked. 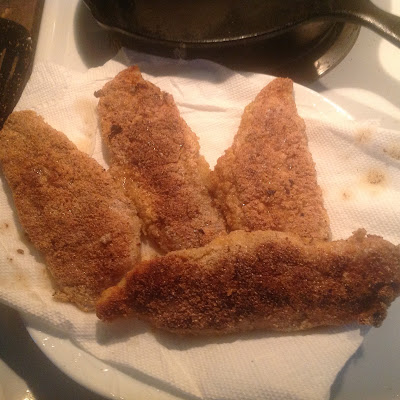 Here's the complete meal, with some leftover noodles, and some broccoli salad the seminarian's dad made; he heard I liked it! Plus a bit of white wine, also leftover. 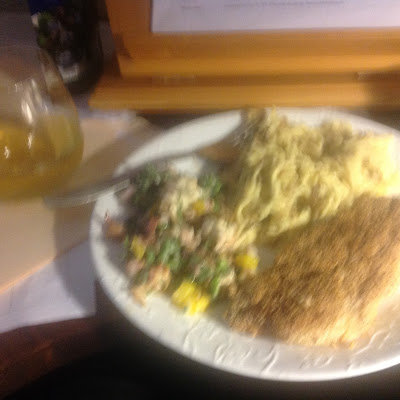 Pretty good! Indeed, I think the catfish could have taken a slight more time in the fat; but when reheated, it will be just right. The noodles -- which turned out to have some chicken and mushroom in them -- were good, and the salad -- with bacon and egg! -- very good!

"But Father! But Father!"(TM) I can imagine you saying: "After properly having fish, you ruin the penitential purpose of the meal with all that meat!"

Well, first, I think bacon fat doesn't count, although I will accept correction on this point. Yet I concede the meat in the other items does. So what's my defense?

In my experience, leftovers need to be eaten up fairly quickly. Those noodles have been in the fridge for...a few days. The salad, not so much, but it's what I had. Also, I had a brief window in which to fix dinner, and this was quick. I just finished a wedding rehearsal at 6:30 pm; and I am visiting a prayer group in the parish at 7:30 pm (hence the modest amount of wine).

Current discipline calls for us to elect our own penances. Not that there's anything wrong with these leftovers, but -- leftovers are a kind of penance. Perhaps I am rationalizing?
Posted by Fr Martin Fox at 7:09 PM

Oh please Father,
Fresh fried catfish in bacon grease is penance. You might as well have had lobster and shrimp! I am jealous! Another penitential practice may be substituted! At least you didn't lead the poor seminarian down the wrong path! Lol!Enjoy thr rest of your summer Father!

This sponds SPECTACULAR! I love fried fish. The closest I have gotten to just right is to use my cast iron skillet heated on medium high with a couple of table spoons of oil/fat and when it is just under smoking, lay the fillets in. The skillet will cool so let it sit for two minutes still on med-high then turn the fillets over and move the skillet to the pre-heated oven set at 250. Let the fillets bake in the oven for four minutes. It they are thick fillets or you have the whole pan covered then let them go for six minutes. Remove from the oven and let coast until you can get them out of the pan. This is heavenly fish.

I think I would have liked it better had I used a mixture of flour and cornmeal, which gave the coating a coarser texture than suits me. Also, much more Franks hot sauce, since most of it, with the egg wash, went down the drain.