Can you guess what Father Fox is cooking?

Some of my readers, here in the parish, have been asking me for more cooking posts. FYI, it's not that I haven't been cooking, but I am usually too focused on food to take time to take pictures and compose a post!

But in any case, I thought it was time to do one. But first let's do a little sleuthing. Can you figure out what I'm working on from these photos? If you are wondering what is in the paper bag, it is some biscuits from McDonalds. While I was out running errands yesterday, I got a couple of their breakfast biscuits, and ate the contents, while mostly not eating the biscuits (too many delicious carbs!); but instead of throwing them away, with my project in view, I brought them home. 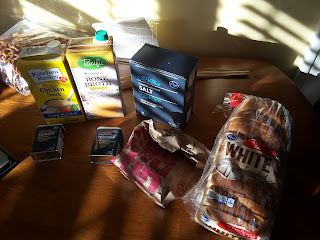 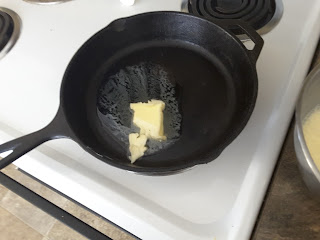 I'm sure there are better ways to make this, but this works. What do you think? 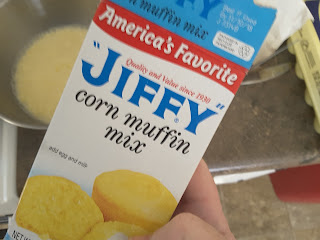 Batter in the skillet, which goes in the oven... 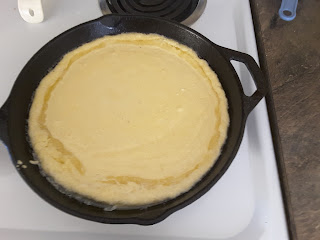 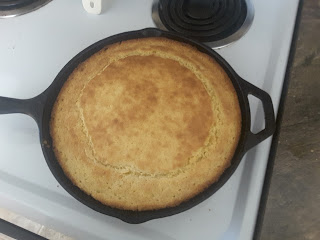 After after (fyi: those are old palms, which I found in my car; I will burn them at the next Easter Vigil). Are you starting to figure out what I'm going to make? By the way, the biscuits mentioned earlier are in the picture; do you know where? 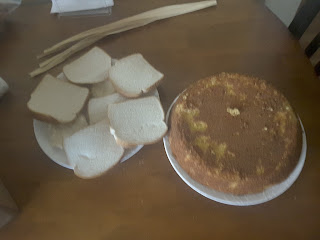 Here are ingredients I will be using in this project today. Stay tuned for more pictures... 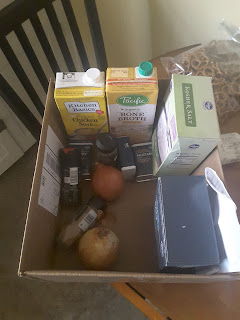 Have you figured it out? Here are more pictures with more narrative. After I offered Holy Mass at the nearby nursing home, I went to the parish hall with my box of supplies, above. (Hint: I put two items in the box by mistake; they were not needed for this particular task after all.) The recipe I was following called for me to simmer some water with coarse salt, coriander, bay leaves, mustard seed, fennel seed and black pepper. It called for whole coriander and black peppercorns, but I had ground coriander, so I used that. And I couldn't figure out how to remove the grinder-top off the jar of black pepper I had from the store, without breaking it, so I simply ground it in. Here is that concoction simmering: 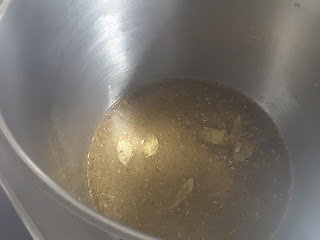 The same recipe called for some dry Riesling wine, and sliced onions. I decided to leave the brown skins on, but I did cut off the ends. 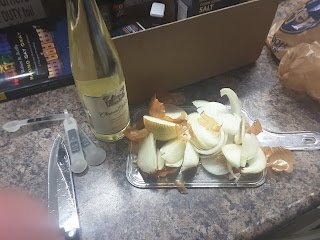 And here is all of it, poured over a 24 pound turkey, which is in a clean garbage bag, in a very large pot. After this, I tied the bag and placed the whole thing in the walk-in cooler. This, plus the very large pots, are why I did this at the parish hall. 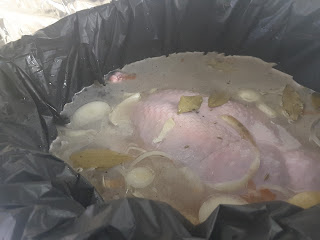 All this marinates for 24 hours or so. What I didn't photograph was my last-minute decision to add more of everything, when I saw that the liquid didn't cover the turkey. So I simmered some more salt and spices, and thankfully I had bought a second bottle of wine, which I dumped in. The proportions will be off, but I don't think that matters very much. That is to say, it may matter to Martha Stewart, whose brine recipe this was, but it doesn't much matter to me. (I'd already left out the juniper berries, because Kroger didn't have them, and I had already decided I wasn't going anywhere else for them.)

Here is a progress report, with more pictures!

Here is the turkey, having emerged from its bath. It was going to be 24 hours, but I got antsy. Here it is in the refrigerator, so that the skin dries out. The plan is for me to rise at 4 am, get this thing out of the fridge without dropping it, and then getting the stuffing ready to go inside it. I have been resisting the 4 am wake-up, but I can find no way around it. 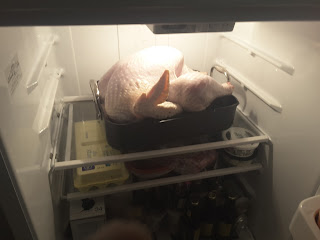 Meanwhile, I did what prep I could for the stuffing. This is equal parts cornbread and white bread (the picture is deceptive: this is a very large bowl).

Everything else is wet, so I will wait till the wee hours to finish the stuffing. I have no idea whether I'll have too much -- I'm hoping! 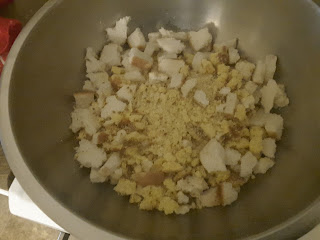 Meanwhile, I have been busy with other matters. I had purchased a disposable baking pan; however, it was too flimsy. So one of my crack staff kindly brought one from home. Also, I verified that the cooler I will use to transport the turkey, with stuffing, broth and fixings for gravy, will actually fit in my car. The good news is that it will indeed fit. The bad news is that, once in the car, I can barely open the lid. That means the cooler can only go in the car loaded; so another of my crack staff kindly volunteered to come over tomorrow around 11 am and help me load this in my car.

Also, I also got a couple more onions, just because -- and duct tape. Why duct tape? A parishioner -- whose brother is the king of roast pork hereabouts -- swears by his technique of keeping the roast pork in a cooler for the last hour of cooking; and it must be taped shut! With duct tape! So we aren't messing around here.

I forgot to take a picture of the oven mitts I bought, which are silicone or something like that. These will be handy tomorrow morning, after morning Mass, when I flip the bird topside again, to brown the breast meat. That's right: I'm going to cook the turkey backside up. That is my solution for avoiding the breast being overcooked.
Posted by Fr Martin Fox at 11:15 AM

Excellent stuffing. Pro-grade. We make "Dressing", basically the same but in a pan. Sorta lame compared to yours, but is very satisfying...

To be honest, I was disappointed with my stuffing. I think white bread works better than cornbread. That said, I'd like to try cornbread again.