I did not 'flip the bird,' and other Thanksgiving news...

Project "Feed my hungry relatives" continues pretty much on schedule.

The alarm went off at 3 am, and I got the turkey out of the fridge, first thing. Here is the prize turkey, weighing in at just under 24 lbs. Note the time on the coffee maker. 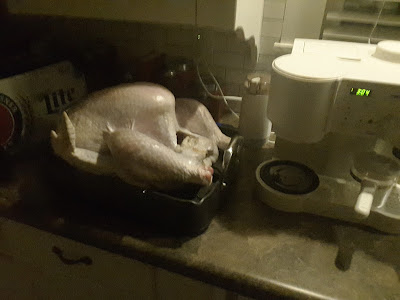 Then I prepared the stuffing. I had already broken up the staled white bread and cornbread yesterday; now I sauteed the vegetables with the various spices. Thrown in were: cajun seasoning, salt, pepper, poultry seasoning, thyme, plus celery and onions. I thought about mushrooms, but decided against (I had some in the fridge). 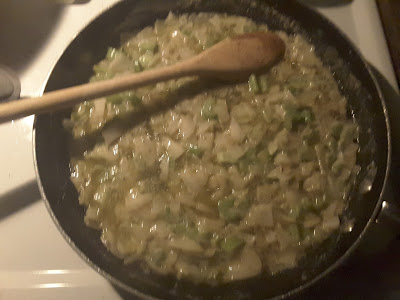 Here is all that stuff in the bread, plus a cut up Granny Smith apple. At this point, I made a rookie mistake. I added all my liquid at once. Never do that! The stuffing was soupy. I quickly toasted several slices of bread and cut it up, and that helped, but I didn't want to throw in too much added bread, or else the balance wouldn't be right. I wasn't happy with the consistency even then, but I went with it.

Note: always add liquid slowly. You can always add more, but you can't take it away. I forgot that at 3:30 this morning. 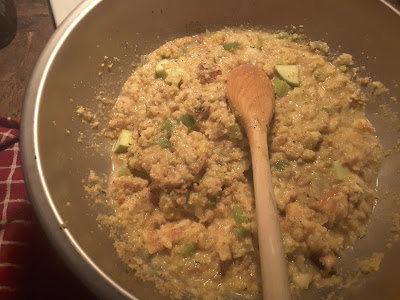 Here is the stuffed bird, with the skin rubbed with butter and sprinkled with coarse salt and ground pepper. At about this point I realized there was no way I was going to "flip the bird": even if the stuffing hadn't been too wet, the problem would be that the stuffing would come out. I also realized that it pays to stuff the neck cavity first, because you want to be able to lift up the bird to do it. But I'd already stuffed the thorax, so I only put a little in the neck and closed that up with a toothpick. 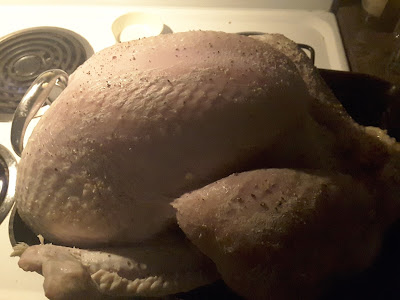 Since I wasn't going to cook the turkey breast down, I covered the breast section with aluminum foil, and into the oven at 4 am. I then remembered the thermometer, and so I put that in, poking through the foil (not shown). 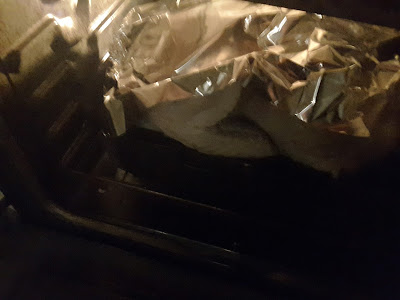 So back to bed I went, but I didn't really fall asleep. I was up again around 7 am to shower and shave, and head over to church for Lauds and Mass. The turkey was fine.

After breakfast, I remembered I needed to fix the stock, that would be the base for gravy later. So I cut up an onion and a stalk of celery, and sauteed these in butter. 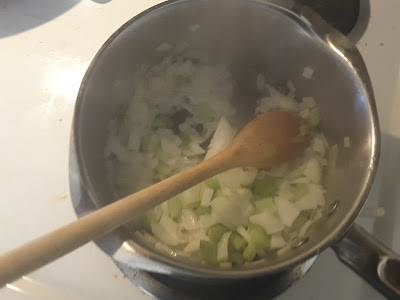 I had bought "Bone Broth" in case I needed extra liquid for the stuffing (ho, ho!), and as I hadn't used it, I made use of it here, instead of water. That went in, plus a bay leaf, plus salt and pepper, and of course, the turkey innards -- sans the liver, which Martha Stewart says shouldn't be cooked too long. So that'll go in later. 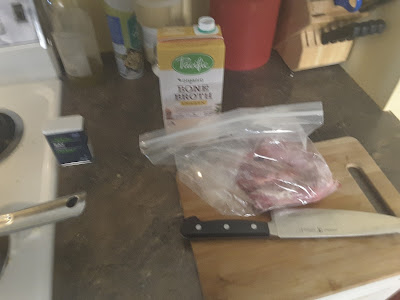 Here is the stock, on the way to a boil. After taking this picture, I turned it back to simmer, and that is what it is doing now. 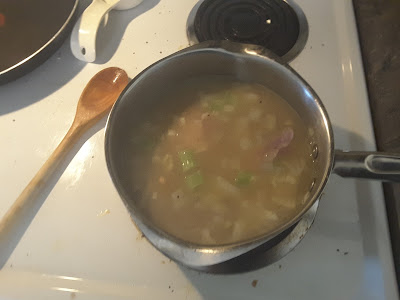 So, the plan from here:

- Finish the stock and strain it, adding back the liver and the gizzard.
- Take out turkey and remove all stuffing. (If it's too wet still, we can try to tighten it up later when I arrive, by baking it. Or else give up on it.)
- Pack all these items in a large cooler for the trip to Cincinnati.

If time is short, there may not be more pictures, sorry! You'll just have to imagine what it looks like!
Posted by Fr Martin Fox at 10:22 AM

Didn’t “get it” with the title the first time I read it. Pretty funny!