Here is the turkey, out of the oven yesterday around 11 am: 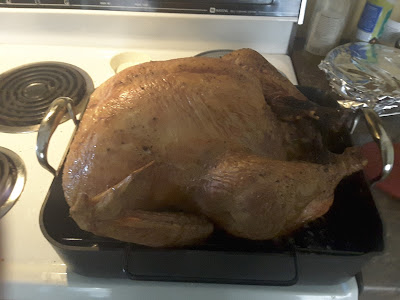 And here is how it arrived to the party in Cincinnati: 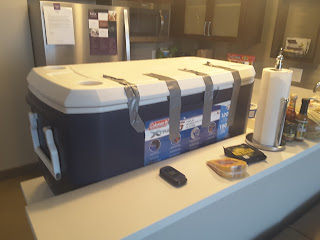 This worked pretty well. Were I to do this again, I would take the turkey out about an hour earlier, to allow for the time in the cooler. Everyone praised the turkey (the skin was quite good), but I think it was a tad overdone. The gravy turned out well. Surprisingly, there was far fewer drippings in the pan. I drained it off, but it was almost all fat. I added some to the gravy, but threw away the rest. I am still a believer in flipping the bird, but that means no stuffing.

About the the stuffing: despite all, it was still tasty. I happen to like it less mushy. Also, I am not convinced that cornbread is better than white bread. Next time, I will try a different recipe.

* There is no proper Latin word for turkey, as in a bird to be eaten, because the turkey had not been discovered; it is native to the Americas. This is the genus to which turkeys belong.
Posted by Fr Martin Fox at 10:46 AM

I grew up stuffing the bird with my Mom, and have since done so for the past 48 years. This year I put “aromatics” in the cavity: fresh sage and thyme leaves, one onion quartered, one apple quartered, one celery stalk quartered, and some orange peel; one half onion in the neck cavity. This won’t fall out turning the bird if you loosely truss the legs, and pin the neck skin. The stuffing was baked aside. It kinda broke my heart to do it this way as I’ve always loved the bird stuffed. BUT, it makes the bird much easier to flip, especially a bigger bird. Blessings!

Dear Fr.,
Thanks for dinner, it was great & the company also. Also thanks for the prayer requests for me. I know God is watching over me & helping me get through my next journey in life. So good people keep up the prayers.
Your loving sister, Eileen

I brine my bird the night before and rise to rinse and season it about 0700. It hits the oven about 0900 and we can allow for Mass. Out about 1200. Instead of stuffing I fill with onion, apple, orange cinnamon, and sage. Top with bacon and he's good to go. It rests on a bed of carrot, parsnips, and celery. When cooking is done I run the drippings and vegetable bedding through a blender and save as a stock for soups and stews. Can be made into a quick gravy, too: While buzzing in the blender, I put flour in the pan and deglaze using a red wine. the bacon that was on top of the turkey is crispy now, so I cut it up with kitchen shears and toss the blended vegetables back in the pan to reduce a little. While this happens I let turkey rest while people admire the bird (Ooo! Ahh!). The meat is removed and sliced for presentation, the remaining bones are stored in freezer bags for stock making later.

A donation to St Vincent de Paul and prayer for the meal and all in attendance. I love Thanksgiving.

According to Lewis and Short, meleagris means guinea hen in Latin. Not a bad name for a turkey. But I also like Linnaeus' gallopavo, the chicken-peacock, a very apt coinage.