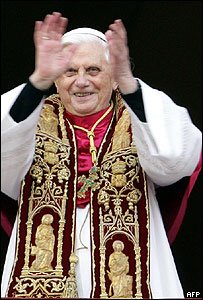 Ad multos annos!
Posted by Fr Martin Fox at 9:50 AM

I have a t-shirt I am wearing today, with almost that same picture on it!

It is a tremendous proof of the the activity of the Holy Spirit that Pope Benedict has been neither what the progressives feared or the traditionalists desired. Deus Caritas Est is a work of wonder. I suspect that it is the kind of declaration that he wanted to write all those years he served as our doctrinal watchdog. After all, Benedict was, before everything else, a priest.

May God bless him.

When our previous holy father was dying, my comment was to recall when he was elected, and to say, God gave us the pope we needed, not necessarily the one we expected or sought. I'd say, thus far, that still seems right.

While I am not saying the pope is above criticism, it does boggle my mind to see the ease with which many will criticize the pope -- this or a prior one -- as if it were a simple matter to suppose what it is like to be pope!

I think this pope is the only one that could have effectively followed JPII. Also, I suspect that before he is done, those on the conservative side will look back fondly on his reign as Pope. The issue is not forcing the issue as much as it is in steming the tide until the liberal wing is lost with age and slowly disappears or gives up after years of hitting their head against a wall that does not seem to bend. This Pope has predicted a smaller Catholic Church but one more devout and traditional and the newest priests seem to be more in that vein and they will one day be the Bishops and Cardinals. In the meantime, why create a fuss which is what some of the left wing desires.

Proof again of the new wine in the leadership of the church. Wish the Cincinnati Archdiocese would follow along:

Word from the Midwest is that Bishop Robert Finn of Kansas City-St Joseph has announced a new lay formation program for his diocese in partnership with Ave Maria University.