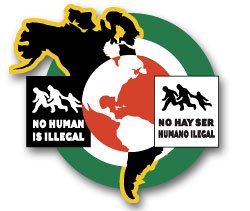 The graphic above has shown up here and there; I saw it at Father Jim Tucker's Dappled Things. I agree with the value expressed in the slogan: human beings aren't "illegal" -- but I have qualms about some of the advocacy around the issue of immigrants illegally in this country.

Oh, where to start?

On the one hand, national sovereignty and national identity. This is important; and many associated with Cardinal Mahoney's position on this seem dismissive of the concerns here.

As a priest, I will do whatever necessary to provide for the needs of people who come to me: I don't ask their legal status, I try to communicate in whatever language (hablo solo pecueno Espanol), and I want to be an advocate for those who need a voice.

As a citizen, I am not sanguine about the prospect that my country would become a different country without the citizens having a say in that. I do not want this to be a bilingual country. I do want our nation to grow, rather than stagnate, as seems to be happening in many advanced nations.

And, I am concerned about our southern border being an easy way for terrorists to get into our nation. Maybe that isn't something we can fully fix in any case.

Now, what do I mean by "tougher"? Well, let's face it (and this is to my more conservative friends), we're not going to deport 10-12 million folks who have entered illegally. It won't happen. So doesn't that mean we should have a path to citizenship for them?

By "tougher," I mean less porous borders, and quick action on recent interlopers.

And, I think, as a nation we have every right -- and a great need -- to emphasize assimilation into our culture.

Having said that . . . time for another hand: as a Catholic and a Christian, there are aspects of our culture I'd dread the folks coming up from the south assimilating! Secularizing, MTV-izing, Planned Parenthood-izing, pornographizing these folks is not my agenda!

But there's enough on particular public policy; now, for another hand . . . the bigger, historical and human question . . .

Property rights, and even national rights, are not absolute. No, I don't want a reconquista, don't have any interest in facilitating it; but in terms of "right" and "wrong," in the broad context? Let's be honest -- the U.S. stole it!

My point is, there are larger tides of history -- perhaps we can redirect them, perhaps not. I'm not saying we the people of these united States have no right to try, but history rolls on.

So, aside from all the big, political questions, we have the specific human needs of people who are here, in our midst. They are not abstractions. The command to treat them as we would treat Christ stands. We, as Christians, should be concerned if the law impedes our obeying Christ in this matter. This is a legitimate point raised by Mahoney, if only to observe some proposals in law need to be clarified. I, for one, have no interest in a "trust me" explanation from Big Brother.

OK, time for another hand . . . we still have the question of what's going on in Mexico -- and what duty do we have to facilitate positive change there?

All the advocacy for the needs and rights of those who entered this country illegally seems to omit this point: that our nation being an easy destination for citizens of nations south of us lets the politicians of those nations off the hook for the change needed there to foster opportunity! Isn't that a social justice question? Yet the folks talking the most about social justice, in this debate, seem only to talk about acquiescing in more immigration to this country.

Final point: one of the uglier charges being made is that the Catholic Church is pro-immigrant because we want to fill our pews in the wake of the Scandal. Some on the right are making this argument, including Tucker Carlson of MSNBC and radio host Michael Savage. Funny, I didn't know the Know Nothing Party was still around.
Posted by Fr Martin Fox at 9:58 AM

Whenver this topic comes up it causes me to come to the same point. Either we are a country of laws or we are not. Who decides what law is allowed to be broken? Do those who come here "illegally" then suddenly develop some respect for our other laws?
The solutions must be a combination of things:
First, we must make Mexico become a good neighbor. They can stop the issue more effectively on their side of the border. If they do not want to become a good neighbor and stop this, there will be no guest worker program and all money supporting mexico will be in jepordy.
Second, employers are taking advantage of cheap labor and avoiding paying taxes. They are now hurting many Americans who depended on jobs in construction of factories. What if you have a landscaping service you have built up after years of effort and now lose your contracts to cheap mexican labor? Go to any job site and you will find Mexicans that have cost Americans jobs they not only wanted, but had at pretty good wages. Find these employers and make them pay dearly the first time and second time send them to jail.
Third, when an illegal breaks any of our laws they are caught, and sentenced to long jail terms where they are used in cheap labor to pay the cost of their incaration.

The illegal immigrant problem would end over night and we could seal our borders with far fewer people. When we solve the problem, then congress should look at the true needs for labor and insure we are not hurting American families with these low cost immigrants taking valuable jobs.

as a Catholic and a Christian, there are aspects of our culture I'd dread . . .

Father Martin,
I'm a little confused-- are you writing in first person as a catholic priest? Or, is the 'I' a figure of speech to represent all Christians including Catholic and non-catholic christians/protestants? My understanding is that calling myself 'as a Catholic and a Christian' is redundant and calls out a discrepency where none exists.
Am I missing something? Appreciate your clarification.
JoeK

Simply as a matter of vocabulary, "Catholic" and "Christian" are not synonymous, any more than "Snickers" and "candy bar" are synonymous.

joeh, give me a break. Those who come to this country illegally have no other way to do it. It is not disrespect for the law, as you say, that brings them here. They want a better life for their families, like my parents did when they brought me here--illegally. I thank them for that.

It is an awful thing you say, and I hear it all the time here in Southern California. This is a complicated issue. Maligning human beings doesn't help.

I welcome you to my site, but calling Cardinal Mahoney a criminal goes too far.

Would you be willing to rephrase your comments, and delete the existing post? Of course, I could simply delete your post, but I'd rather give you the opportunity to revise your remarks.

"the U.S. prospers because it is a nation of laws and respects lawfull behavior. If that changes, and it might, we will be exactly like Mexico, corrupt to the core."

pewsitternh, the U.S. prospered under lawful slavery and going along with it was "corrupting to the core." We no longer have slavery, but joeh's proposition gets close ("...sentenced to long jail terms where they are used in cheap labor...").

To create an unjust system we need two things, which your side already has done. First, to dehumanize human beings, which your side does by assigning the noun "illegals" to people. As joeh puts it "Do those who come here 'illegally' then suddenly develop some respect for our other laws?"

Second, it is necessary to create an imaginery threat, which the myth of "reconquista" is.

Illegal immigration is a complicated issue. A guest worker program like the Kennedy proposal is probably the best we can do.

I waited a day, and decided to delete Pewsitter's post, above, for reasons explained, in a post made yesterday, also above.

Arturo, I respect your opinion and where you are coming from. You should understand, however, that those who oppose amnesty for illegal immigration are not necessarily all racists. Joeh appears to propose a "get tough on illegals" plan. I would argue that the companies hiring illegal aliens are fomenting slavery much more than his plan would. Also, calling them illegal, while not politically correct (as of about a month ago) is factually correct. "Reconquista," while not being a serious threat at this time, is in fact not a myth. Serious problems occur not from moderated legal immigration, but from massive undocumented border crossing in such large groups that rather than be assimilated another seperate culture is born within a nation. This only causes conflict that cannot be avoided. If we were to legalize the existing illegal population, as we did in the 80s, it would only encourage more individuals to cross over (to the delight of Republicans and Democrats in Congress). This, in turn, would give them an easy alternative to fixing what is clearly wrong in their own nation.

I did not say anything about anyone being racist. What in joeh's comment made you think I thought he is racist?

I think that there's something else going on here. Partly to "blame" for the problem of illegal immigration is the demand for cheap labor. But it isn't just "greedy" employers who are responsible. It is consumers, all of us, you and me, who naturally seek out the least expensive products and services to buy. It's how we get what we want. The supply follows the demand.

So racism isn't what's causing some to malign illegal immigrants. It is our inability to look at ourselves. It's that we don't want to admit that things that we generally admire, (their) hard work and (our) frugality, is giving us something we don't like. It's easier to blame others, so we blame "illegals"--as illegals they do illegal things, so how can we expect them to "suddenly develop some respect for our other laws?" is how joeh put it.

There is potential for racism to come from all this, but I really don't think that's happened yet.

About MECHA. The only time I've ever encountered MECHA's nonsense was among a very small group of students in college. More instructive is the hysteria in the article you link to, which anti-illegal-immigrant activists are using to create the myth of "reconquista."