Sex, marriage and gays: The Church won't change, because she can't 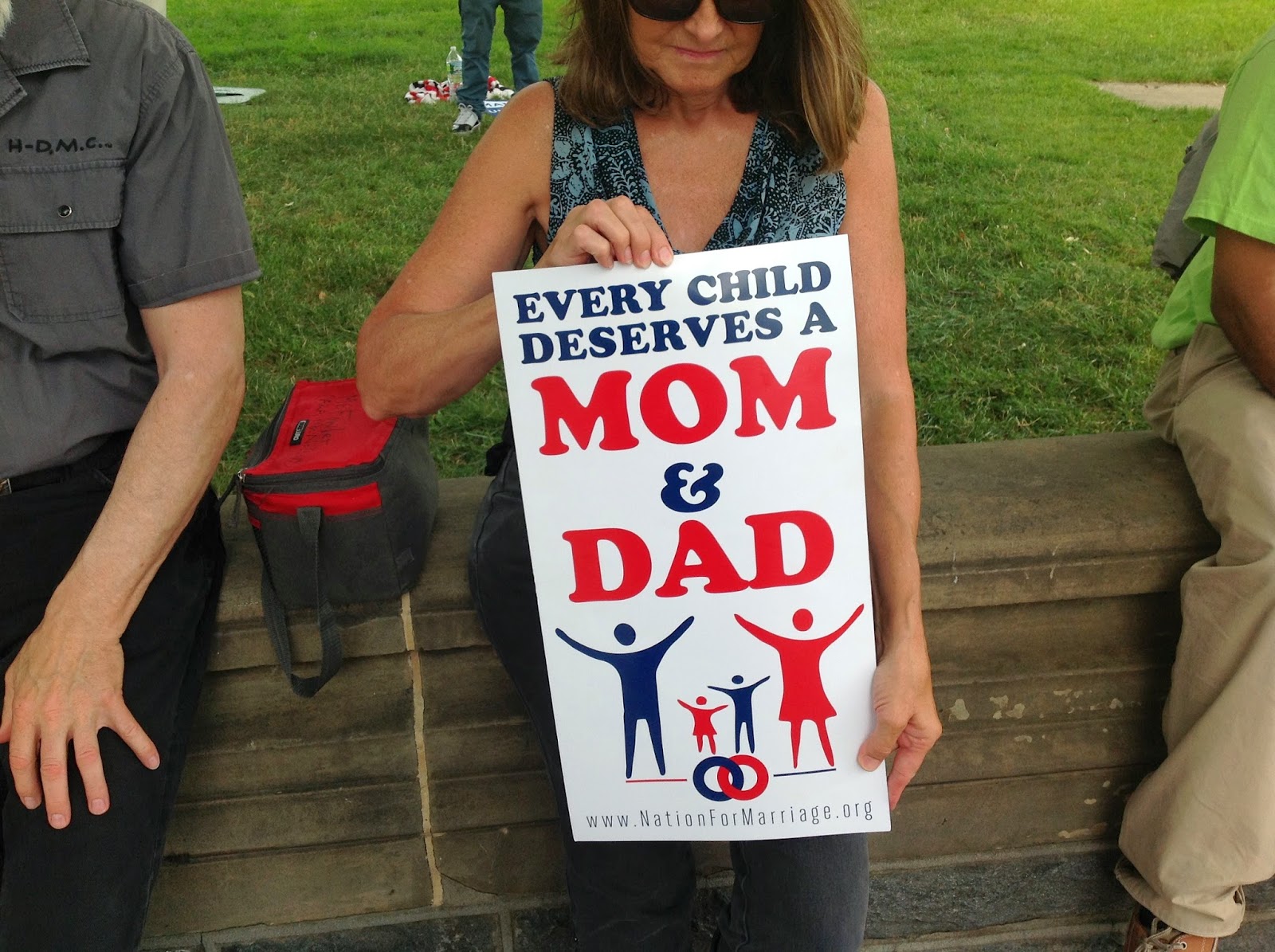 While paying my biennial visit to DC to visit friends and family, I saw that I'd be in town during the "March for Marriage," and I decided to go down for the march. My decision was helped when I saw Rep. Nancy Pelosi -- no longer content to be an advocate for baby-killing and proud to cast aside those portions of the Faith that don't fit her political fashions -- had tried to bully the Archbishop of San Francisco into ducking out of the march. The Archbishop said nuts to Pelosi, and I wanted to join with him.

But I didn't go for all the talks. The plan was two hours of speechifying before the march; and as I was going to be all in black, standing in 90-degree sun, so attired, sounded like a bad idea. As it is, the talks were still going when I arrived at 1 -- they went about 20 minutes over. This happens at the March for Life every year in January; and as one of the many who has stood with freezing feet, listening to this go on and on, I have a solution for that occasion. Anyone who gets up to speak at the January March for Life must first remove his or her coat, hat and shoes. If it's raining, the umbrella is removed when their time is up. I'm not sure what would be an equally powerful incentive for June speechifying.

Well, look at me--talk about the pot calling the kettle black! Let's get to the subject.

A lot of folks, both non-Catholic and so-called "progressive" Catholic, are determined to see the abandonment, by Christianity, of all those fusty, unpleasant teachings that -- if we just shook free of them, would make everything so much nicer. In other words -- we wouldn't be embarrassed at cocktail parties and cookouts.

To be jettisoned are:

> No ordination for women.
> No remarriage.
> No sex outside marriage. (Wait, you Catholics still believe that? Next thing you'll tell me is you think solitary vice is still a sin! Erm, go here, look for paragraph 2352.)
> No sex in marriage that isn't ordered toward procreation.
> No contraception.
> Marriage is man+woman.*

Now, at some point, someone will shake his or her head and say, oh, you Catholics are just obsessed with sex! Which is like saying the Red Cross is "obsessed" with disasters. Like the Red Cross, we'd be delighted to focus on other things.

Also, someone might look at the list above, and think, which one isn't like the others? What's ordination doing there? Well, it could be there merely because it, like the others, is hated by progressives and modernizers as an obstacle to people flocking--flocking! to Christianity. But there's a second reason: it is intrinsically linked to the others, because it has to do with how we understand the identity of human beings as male and female. If you believe, with the Church, that human nature is bound up with sexual complementarity, then these all hang together. But if you don't, then they all seem obscure and restrictive.

Why doesn't the Church jettison these things? Because she can no more do that, than your body can live without a heart and lungs. The Church's teaching on these matters derives, not merely from Scripture, but also from Tradition and, above all, Natural Law. Or, to sort it another way, from both Divine and Natural Revelation.

Now, there is an interesting historical-theological question here: can Christianity coherently operate solely from Scripture? And I think the developments since 1930 -- the year the Anglican Communion led the way by other Christians to abandon the consensus on contraception and other forms of deliberate sterility -- are developing in such a way as to answer that question in the negative. To put it simply, and to address it to our dear fellow Christians who are Protestant, Evangelical or non-denominational: sola scriptura doesn't work. Rejecting Natural Law doesn't work. The Catholic understanding, however rejected by the worldly, nevertheless works. And since when does rejection by the world discourage us? Did not our Lord tell us this is a sign to expect? What does it say when so many of our fellow Christians have accepted the worldly view on contraception and divorce--and now find themselves no less hated by the world?

The next accommodation to the spirit of the world is to agree with the world that male-female are meaningless terms, interchangeable, redefinable at will.

The ground we needed to stand on was given up, long ago, when we yielded to easy divorce and to contraception. The Catholic Church has not yielded doctrinally, but so many Catholics (including priests and bishops) have, practically. We are mostly silent, and when we speak, it is the peep of a mouse rather than the roar of a lion. Yet our non-Orthodox fellow Christians have largely abandoned this field entirely.

So here we are, manfully opposing same-sex "marriage," claiming to defend marriage, even while many of us have muted our explanation of why sex between people of the same sex is immoral; and even where Christians haven't -- as in so many Protestants -- we've accepted the division of sex and procreation.

Oh yes you did, my friends: when you accept contraception, you accept that there is no intrinsic, unbreakable relationship. And when you do that, then you get the question you really can't answer: why can't two people of the same sex marry?

Yes, I know, the Bible says so. I agree it does. However, the Bible also is crystal-clear on marriage being always open to the gift of life. The Bible never conceives of a couple wanting to avoid having children; and the one time the subject is broached, someone is struck dead for "spilling his seed." Yet somehow, all this was got around.

The passages on homosexual acts are, by contrast, far fewer and easier to escape, if that's what you want to do.

What's more, just pointing to the Bible is an incomplete answer. Yes, it is. Because there is the obvious followup question: why does the Bible -- i.e., God -- say that? Why does God forbid two people of the same sex from doing these things together? Why does he care?

How do you answer that -- without Natural Law? "Well, because he's God, so he makes the rules" is an admission of defeat.

Meanwhile, here's a question for the progressives, which I haven't seen answered (I don't mean just here, but anywhere): when you reject Natural Law, what other criteria for sexual morality is there, besides consent?

If Natural Law is jettisoned, with it goes the sex-always-open-to-procreation part. That means contraception is OK. So why shouldn't people have all the sex they want before marriage? Why shouldn't adultery be simply a matter of concern for the couple? I.e., if they consent, is it still immoral?

And, of course, out goes any notion that it homosexuality matters. But why should incest matter? Polygamy? Again, if there is consent, on what basis would any part of the Christian Church teach that any sexual act is immoral? At best, you would have to say, it was immoral because you didn't use "protection."

All those who hope or fear the Catholic Church will change in this area? Abandon all hope or fear. The Church will not. Because she cannot. There is no coherence to her Faith if she were to do so.

*Someone will notice I could have included many other teachings that so-called progressives wish the Church would drop, particularly in defense of human life. But these aren't directly related to the issue of Natural Law as it relates to sexual complementarity.
Posted by Fr Martin Fox at 1:50 PM

I hope you are right Father.

Pray for our bishops and priests to have strength. We can be good examples, too.

The Church won't change because the truth never changes.

Sex is one of the most important drives in our lives. How we handle it tells almost everything about us psychologically, spiritually, and in every other aspect of our character.

You know, liberal types want to say that homosexuality doesn't matter. But see how upset Barbra Streisand, Cher, and Warren Beatty were to have gay or transgender children. The truth (and our sexuality) does matter...

Father, thank God for you and your ministry, and your witness to the truth.

Portae inferi non praevalebunt adversum eam-- but I hope that those with their eyes open, clergy and lay alike, are preparing for the storms sure to come. I'm not allowed to say, God bless you! when a student sneezes in the classroom: 'not allowed' by the pressure exerted by the obvious displeasure of the public school powers that be, and, perhaps, administrative policy. But that's all harbinger of the laws that are coming. And it'll get much worse than that, I think, before it gets better.

Russia is lucky to have you!

I so very much appreciate you, and your strong stand for the truth. You are in my prayers, Father. ~ Rosemary

"I'm not sure what would be an equally powerful incentive for June speechifying."

Give their coats back from January and make them wear them.

Archbishop Schnurr made an interesting comment during an interview. He felt that instead of saying the "Church teaches" or the "Church says" we should say..."Jesus Christ teaches..." or "Jesus Christ says.." it puts the truth in a new light for many. Instead of thinking that a "bunch of old men in Rome" are making the rules, it puts the focus where it belongs...on the truth and teachings of our Savior, Jesus Christ. (and the Church is merely echoing and sharing His teachings.