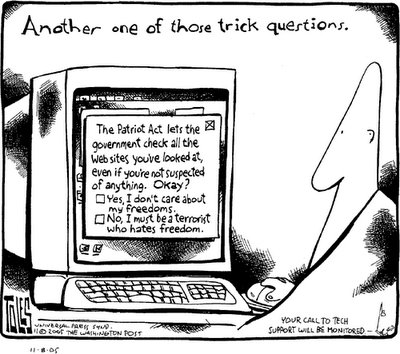 Have you taken even a moment to study the truth about 9/11?

I appreciate your many visits here, and of course you are welcome here; but it seems to me its poor form to use posts in comments here, essentially to promote ones own blog. Perhaps I'm out of step with blog-etiquette.

To be candid, I think the threshold for conspiracy theories to have credibility is astonishingly high. That means, someone who wants me to look into one has about five seconds to hit a home-run, as it were; otherwise, I'm moving on. Life is too short to chase all these phantoms.

If you're calling into question the fundamental responsibility of Osama Bin Laden and his merry band of terrorists, for the attacks of 9/11, and offering some theory that it was a kind of treasonous conspiracy -- I'm sorry, I don't buy it. Is it possible? Sure. Anything possible. Is it credible? Not in the slightest. Not to me.

But you see, here is the humongous flaw in all conspiracy assertions. If the conspiracy is really so massive, so monumental, and so nefarious, that one has to wonder, what difference does it make whether I investigate it or not?

Evil has its hands on every lever of power, everywhere! So much so, that they can sweep the most monstrous conspiracy in history under the rug; ah, but a few bloggers are gonna bring 'em down!

So, to respond to your question: "Have you taken even a moment to study the truth about 9/11? My response: What difference will it make?

(I don't say to be obtuse, or callous--just to cut to the chase.)

I think there's a difference between true privacy and things that aren't private but people tend to EXPECT won't be observed. Do I like the idea of the government (or anyone else!) going through my garbage? No, indeedy. Can someone go through my garbage after I've put it out on the street? Yep, sure can.

I'm not entirely sure what to think of the Patriot Act, but I'm not terribly upset about it. As proponents continually point out, the government has been using these powers for decades in matters such as organized crime. If it really violated our freedoms, why hasn't it been reviewed and overturned by the Supreme Court? Because no one can really make a case that it does.

Far as the conspiracy theories go, the most fleeting of secrets are government secrets. A conspiracy of this size would involve lots of people so it would be leaked and confirmed quickly. Heck we can't even keep secret supposedly secret prisons in foreign country. Additionally, NO ONE in our military would go along with it.

The cartoon is the typical crap the left puts out. The Patriot act is more about giving the government the ability to do to suspected terrorists what they already have the power to do to drug dealers or organized crime figures. Where the government abuses this authority they will get smacked. I am confident our diligent and "loyal" media will be right there.

In general, I'm not worried about it. I have nothing to hide and besides, I am actually encouraged that the government went and got a law to do this. They could have just done it with a classified Executive Order without telling anyone, which would have kept it "black" in the shadows and out of the glare of public view. This way there is a record, and YES, they actually went through the Legislative process. This is more than the Abortionists and Moral Relativists do. They just use the courts and never let the people decide. The left needs to suck it up, this is the way the process is supposed to work.

People also forget that the rise in computer technology has given us much more anonymity than ever before. Many of the things people bring up as "privacy issues" were public knowledge before computers. This is still usually the case in small towns. When your neighbors, mailman, garbage man, librarian, bank teller, and every store cashier knows you by name, you can pretty much bet that everyone in town would know what you ate, bought, and read, where you went, and who you wrote to. It was just part of life. Also anything out of the ordinary was immediately noted and disseminated.

Wilson, FDR, Lincoln, Truman, Nixon, and LBJ. Everyone of these people had issues with privacy in times of war. I think one of the issues we have today is fighting undeclared wars. Korea was a police action, Vietnam was never a delcared war and now we have the war on terror without declaration. When war is declared as in WWI or WWII, there is immense power given to the executive branch. That is because in times of war, a lot of things are needed that protect us and our troops from harm. What Lincoln and FDR did during time of war would bring calls for impeachment today and yet we view these men as heroes which they are if one cares about the country. Lincoln took away a lot of citizens rights during the civil war. FDR kept a lot from the public and was supported in this by a willing press. He also imprisoned a lot of Japanese and German American citizens for the duration of the war without representation. The FBI investigated whoever they liked in the name of National Security. Today, we whine about the Patriot act when that would have seemed common sense during wartime. During VietNam I volunteered for service and served a full four years from 65 to 69. I watched while the left attacked our country with a willing press. I watched as the Pentagon papers were released to print and many lost their lives as a result because the left hated Nixon. We ran away and lost this war not because of military loses but because the left killed us at home. History of the period has been rewritten as much of history is to our loss. Lies or any other method was used to kill our war effort and soldiers in the field lost their lives as a result. We are starting to repeat the same thing today and much of it is from the same groups, a little older and grayer, but filled with the same hate for our country.