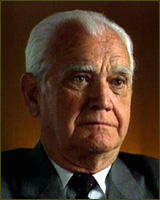 The New York Sun has a fine editorial tribute, via RealClearPolitics, to General William Westmoreland, who went to his eternal reward last week.

In Vietnam, he had led what became one of the largest military expeditions in American history. He'd been sent to Saigon in 1964, after the catastrophe of the coup that President Kennedy had authorized in 1963 and that had resulted in the murder of President Diem, precipitating the war that defined a generation. Free Vietnam, in the years Westmoreland was there, faced and fought off one of the fiercest assaults any government has ever sustained. Millions of enemy soldiers were backed by both the Soviet Union and Red China. And when the general was in the thick of that fight, he asked his country for 200,000 more troops, only to be, on the recommendation of his civilian superiors, denied.

It is sometimes said that Vietnam was the first war that America lost. But there are those who understand that it wasn't lost on the field of battle. What needs to be said at the time of Westmoreland's passing is that he won, for his country and the Free World, the battle in the field. Even on Tet, in January 1968, when the enemy threw all its forces into an offensive that astonished the world, even then, the Americans and South Vietnamese and their allies were victorious in military terms. The enemy was devastated. What needs to be remembered is that the defeat came in the political arena when, early in 1975, Congress voted to halt the resupply of our treaty ally, precipitating the retreat from the Central Highlands and the final communist conquest.

The Sun is right; it certainly does need to be said! Over and over!

I will never forget those days in April, 1975, watching the reports of the collapse of South Vietnam; of course, the most vivid memory is of the people of South Vietnam, fleeing southward, in terror. Where did they go?

They fled to Saigon, to the U.S. Embassy. They broke down the gates; they clung desperately to the helicopters as they took off, until there were no more. Then they threw themselves into the sea, with nothing! Only the hope that America would rescue them.

I was deeply ashamed; I could not believe what my nation was doing to those people.

Some episodes of our nation's history have been presented to us enshrouded in a thick cloud of lies; this is one of them.
Posted by Fr Martin Fox at 11:25 AM