Al Pacino takes a flamethrower to U of St. Thomas 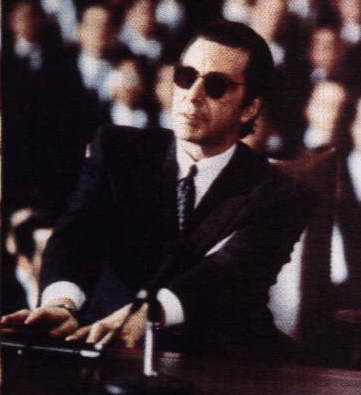 The way the University of St. Thomas administration came down on Ben Kessler, the now-famous graduate who dared to say out loud, at a Catholic-affiliated university, that chastity was good and contraception was "selfish," reminded me of this climactic scene from the film, Scent of a Woman.

To recall: the Chris O'Donnell character, a student at a prep high school, is on trial for not identifying the culprits in an act of vandalism. Al Pacino plays Colonel Slade, a self-destructive, but larger-than-life, retired military officer who comes to his defense.

Mr. Trask: Mr. Simms, you are a cover-up artist . . . and you are a liar.
Colonel Slade: But not a snitch!
Trask: Excuse me?
Slade: No, I don't think I will.
Trask: Mr. Slade.
Slade: This is such a crock of s***!
Trask: Please watch your language, Mr. Slade. You are in the Baird school, not a barracks. Mr. Simms, I will give you one final opportunity to speak up.
Slade: Mr. Simms doesn't want it. He doesn't need to be labeled..."still worthy of being a Baird man." What the hell is that? What is your motto here? "Boys, inform on your classmates, save your hide; anything short of that, we're gonna burn you at the stake"?

Well, gentlemen, when the s*** hits the fan, some guys run... and some guys stay. Here's Charlie facin' the fire, and there's George...hidin' in big daddy's pocket. And what are you doin'? You're gonna reward George... and destroy Charlie.

Trask: Are you finished, Mr. Slade?
Slade: No, I'm just gettin' warmed up.
I don't know who went to this place. William Howard Taft, William Jennings Bryant, William Tell, whoever. Their spirit is dead, if they ever had one. It's gone. You're buildin' a rat ship here, a vessel for seagoin' snitches. And if you think you're preparin' these minnows for manhood, you better think again, because I say you are killin' the very spirit...this institution proclaims it instills. What a sham.

What kind of a show are you guys puttin' on here today? I mean, the only class in this act is sittin' next to me. I'm here to tell you this boy's soul is intact. It's non-negotiable. You know how I know? Someone here, and I'm not gonna say who, offered to buy it. Only Charlie here wasn't sellin'.

Out of order? Who the hell you think you're talkin' to?I've been around, you know? There was a time I could see. And I have seen. Boys like these, younger than these, their arms torn out, their legs ripped off. But there is nothin' like the sight...of an amputated spirit. There is no prosthetic for that. You think you're merely sendin' this splendid foot soldier...back home to Oregon with his tail between his legs, but I say you are...executin' his soul!

And why? Because he's not a Baird man. Baird men. You hurt this boy, you're gonna be Baird bums, the lot of you. And, Harry, Jimmy, Trent, wherever you are out there, f*** you too!

Trask: Stand down, Mr. Slade!
Slade: I'm not finished. As I came in here, I heard those words: "cradle of leadership." Well, when the bough breaks, the cradle will fall, and it has fallen here. It has fallen. Makers of men, creators of leaders. Be careful what kind of leaders you're producin' here. I don't know if Charlie's silence here today...is right or wrong; I'm not a judge or jury.

But I can tell you this: he won't sell anybody out...to buy his future! And that, my friends, is called integrity. That's called courage. Now that's the stuff leaders should be made of. Now I have come to the crossroads in my life. I always knew what the right path was. Without exception, I knew, but I never took it.

You know why? It was too damn hard. Now here's Charlie. He's come to the crossroads. He has chosen a path. It's the right path. It's a path made of principle... that leads to character. Let him continue on his journey. You hold this boy's future in your hands, Committee. It's a valuable future, believe me.

Don't destroy it. Protect it. Embrace it. It's gonna make you proud one day, I promise you.

"he won't sell anybody out...to buy his future!....Don't destroy it. Protect it. Embrace it. It's gonna make you proud one day, I promise you."

That about says it. I only wish I could have been there to hear the speech.

Very powerful, as I'm sure Al Pacino delivered it. Thank you.

I'd actually rather see Benedict XVI assign somebody to put the "Ranger grip" on these "Catholic-affiliated" (again, great term Father) schools and not let go until they agree to become Catholic again.

I think these sell-out schools should not be allowed to call themselves "Catholic" anymore.