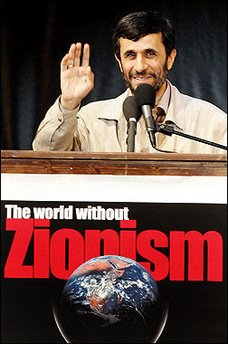 * Item: Ahmadinejad disputes whether the Shoah/Holocaust, and the death of six million Jews, happened.

* Item: Iranian Parliament calls for all Iranians to wear specified clothing, and that minorities will have specified clothing? (This is interesting: the story starts with a denial, but further details emerge later on...):

Experts say report of badges for Jews in Iran is untrue

Several experts are casting doubt on reports that Iran had passed a law requiring the country’s Jews and other religious minorities to wear coloured badges identifying them as non-Muslims.

The Iranian embassy in Otttawa also denied the Iranian government had passed such a law.

...Sam Kermanian, of the U.S.-based Iranian-American Jewish Federation, said in an interview from Los Angeles that he had contacted members of the Jewish community in Iran — including the lone Jewish member of the Iranian parliament — and they denied any such measure was in place.

Mr. Kermanian said the subject of “what to do with religious minorities” came up during debates leading up to the passing of the dress code law.

“It is possible that some ideas might have been thrown around,” he said. “But to the best of my knowledge the final version of the law does not demand any identifying marks by the religious minority groups.”

Ali Reza Nourizadeh, an Iranian commentator on political affairs in London, suggested that the requirements for badges or insignia for religious minorities was part of a “secondary motion” introduced in parliament, addressing the changes specific to the attire of people of various religious backgrounds.

Meir Javdanfar, an Israeli expert on Iran and the Middle East who was born and raised in Tehran, said yesterday that he was unable to find any evidence that such a law had been passed.

“None of my sources in Iran have heard of this,” he said. “I don’t know where this comes from.”

Mr. Javdanfar said that not all clauses of the law had been passed through the parliament and said the requirement that Jews, Christians and Zoroastrians wear special insignia might be part of an older version of the Islamic dress law, which was first written two years ago.
“In any case, there is no way that they could have forced Iranian Jews to wear this,” he added. “The Iranian people would never stand for it.”

However, Mr. Kermanian added that Jews in Iran still face widespread, systematic discrimination. “For example if they sell food they have to identify themselves and their shops as non-Muslim,” he said.

Rabbi Marvin Hier, the dean of the Simon Wiesenthal Centre in Los Angeles, acknowledged that he did not have independent confirmation of the requirement for Jews to wear badges, but said he still believes it was passed.

“We know that the national uniform law was passed and that certain colours were selected for Jews and other minorities,” he said. “[But] if the Iranian government is going to pass such a law then they are not likely to be forthcoming about what they are doing.”

Worth noting is the underlying item--the "Islamic dress code" -- which isn't nearly so radioactive (pardon the pun); this, of course, recalls yet another totalitarian's playbook, do you know? 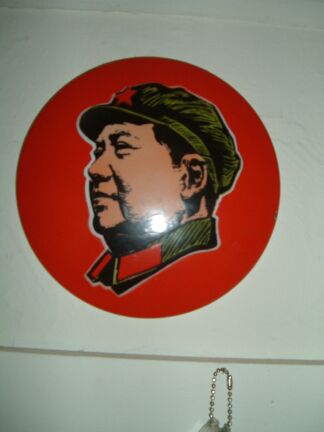 The Iranians joined the Arabic Islamicists in condemning Israel as an international threat at least as far back as 1978, with the publication of the Protocols of the elders of Zion in Iran. Note that that was before Shah Mohammad Reza Pahlavi got into big time trouble with his own people, so it may have been a last ditch effort to pacify or distract them from discontent with his rule. Check out the entry on Iran in The Protocols of the Elders of Zion in Wikipedia.

Of course you realize it's the job of the diplomatic people to spin things in a less threatening way.

I read the other day that Iran shows the Dome of the Rock on their printed currency. This seems vaguely unsettling, in that the Dome of the Rock is in Jerusalem. Admittedly, it's the third most important shrine in Islam, but you can't help wondering if putting a landmark that's not currently within Iran on their currency suggests a desire to add that landmark to their territory.

Ahmadinejad is an extremist. He's unsettling, but it's more of the same. We can make a long list of leaders that we wouldn't want to live under. Personally, I'm sick of the White House forcibly subscribing me to the Villain Of The Month club.

Let Ahmadinejad rattle his sabre, keep an eye on him, but lets not overreact. If the Bush adminstration is really worried about Ahmadinejad for humanitarian reasons or as a threat to peace, they have an awful lot of other dragons to slay for the sake of consistency.

Ahmadinejad's real crime is being hostile while having natural resources that we want. Your chances of being vigorously demonized by the US government (whether you deserve it or not) increase exponentially when you have oil reserves, commerically valuable canals or anything else of value to US industry.