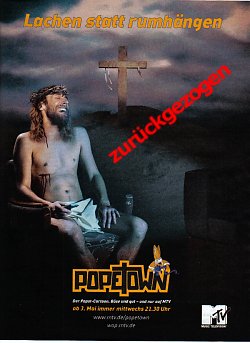 Update: this is the ad I describe in the letter below. I downloaded this, from MTV's German site, several weeks ago. The translation of the German is not mine; I relied on another blog, the Cafeteria is Closed, for that.

I sent this letter to Viacom today, concerning its offensive show, "Popetown":

Viacom’s webpage says of you that under your leadership, “MTV Networks grew to reach 164 countries through 100 channels worldwide… Mr. Freston oversaw the breakthrough ‘I Want My MTV’ campaign.” These successes helped bring you to your current position.

As admirable as your hard work and creativity are, it is hard to speak gently or diplomatically of the ends to which MTV’s innovations and creativity have been devoted:

1. To the exploitation of young people; and now,
2. To blasphemy of the faith of a large number of them.

Every year, millions of teenagers get drawn into the heartbreak of meaningless sex -- something MTV profits from, hand over fist. It would be laughable to claim that MTV “merely reflects” social trends: MTV is a social trend, and a powerful one at that!

Odd, that you omit so many of the real-world consequences: the devastation of giving oneself away, only to be cast aside like a used Kleenex; and having nothing to show for it, except perhaps a sexually transmitted disease, a pregnancy, perhaps an abortion, and very likely, a hole in ones heart.

What became of these young people and their lives? Do you know?

Now, I learn you have moved on to blasphemy.

I learned recently of your show on German MTV: “Popetown,” a cartoon show with a “brattish” pope and “pervert” cardinals.

MTV’s defense is this isn’t anti-Catholic; it’s a “work of art!”

Is that your defense of the advertising for this show: Jesus, bleeding from his crucifixion, lounging in front of a TV with the caption, “Laugh instead of hanging around”? Some art!

I refuse to remain silent as you crucify Christ in this fashion, for whatever profit or gain it may bring you. I refuse to whitewash your assault on Catholics, following on your assault on the innocence and future of young people.

Realistically, there is little chance I will change your mind; but I am willing to try.

Know that I will share this letter with the families in my parish; I will post it on my website; I will circulate it in every way possible. And I am not the only one.

At some point, I pray you will decide this is not the course for you, or for your company.

As a priest, I would be remiss if I did not say, very plainly:

Repent! God has given you great abilities, great opportunities; and great power. Alone in your own conscience, can you really say the exploitation of young people, and the mockery of faith, are a proud legacy?

Know I am praying for you, your decision, and your soul.

Sincerely yours in Christ,

(FYI: I told Mr. Freston I would post this, giving him my web address.)
Posted by Fr Martin Fox at 3:41 PM

Thank you for writing this, Father! I hadn't heard of or seen the show, but I completely agree with your letter based on what you have said about the show. God bless!

Have you seen the show - I watched an episode when it first played here - it was terribly unfunny I struggled to watch it through.

While I am not in the demographic nor am I a big fan of cartoons I do recognise a good one - and this isn't one of those.

How many series have been done any info on the ratings? I would be surprised if it lasts.

What's your point, that if the show isn't any good, then it doesn't matter that Viacom put it on the air?

The fact remains, Viacom launched an attack on Catholics. This is the kind of thing, if done to our Jewish brothers and sisters, would rightly be condemned.

Thanks again. I am going to take this info to the next K of C meeting along with envelopes, pens and paper and ask my brother Knights if we are going to stand with you or do nothing. We are few but I bet everyone there will write.

Thank you, Father, for standing up for what is right.

I had not heard of it, nor have I seen it. I felt sick just looking at the ad. So sad!

I agree Christians are more accommodating to criticism but I don’t think a tv company seriously wants to launch an attack on 26% of the US population. What they want is ratings. Aside from being mildly (seriously) offensive (depending on you POV) its real crime is that it simply isn’t funny.

In my Country the Catholic Church criticised it and launched a petition, they set out a campaign which would roll for two months, boycotts of advertiser’s products, phone ins, letter writing the full works. The tv company simply played it early on the back on the publicity and got RECORD ratings - highest in the history of the channel. The campaign needless to say ran out of steam – the cartoon was on the front page of every major daily, covered on radio and in tv news broadcasts – the tv company could not have brought the publicity.

The Catholic Church is a global institution - doesn’t she learn from what happens around the world.

I can remember, when I was a boy, (there's a sign of getting old)that pagan societies and martyrs for the Faith were far away in either space or time. Not so anymore. While this is no particular news to anyone, the West is evolving into something "post-Christian." Not all bad, but not all good. The expectation that society will track a general Christian track is not a sure thing anymore.

Jesus, the Church, all matters Christian have been absorbed into a Western culture that treats them as components no different from Rationalism, Existentialism, or Grimm's Fairy Tales. This is not to deny that many still believe, but that belief no longer serves as the cultural axis.

To some extent, this is not so bad. Many decisions were made in our past either endorsed by or covered by the idea of "Christendom." Some of those acts were a bit iffy. Still, the Church is being relegated to one of many possible influences in the minds and actions of people. There will be more Popetowns to come, unless we start planting bombs at Viacom (WHICH I DO NOT ENDORSE AND WOULD NEVER SUPPORT UNDER ANY CIRCUMSTANCES!!!)

The Gospel contributed much to our culture and might well learn something from the culture that is developing. But we are going to have to work harder in the marketplace of ideas, and figure out clearer, more appealing ways to spread the Good News to a world not willing to make it their default position. The Truth may remain forever the same, but the way we speak it changes with each generation. It's fine and good to protest blasphemy, but change comes one by one, with eac hungry person fed, each weeping person consoled and each spat of hate met with forgiveness and love.

To reiterate, I don't expect I'll change Viacom's mind on this; but I think it's proper to speak out from time to time, because non-responsiveness is a response; it gives these folks a sense of where they will draw the line.

For example, "Popetown" is not, thus far, being broadcast on U.S. MTV. I feel confident they know they'd get more trouble than it's worth to them; yet they didn't make the same calculation in Germany.

Mark is correct; it may be we'll see this sort of thing here. Speaking up now may induce them to be a little less vicious about it.

One thing more: it's not as though Viacom doesn't have it coming. MTV is appalling; as I suggested in my letter, "Popetown" isn't even as bad, in my judgment, as some of its other programming. But we must start somewhere.

Some may "want their MTV" and as far as I am concerned, they can have it!

I want my EWTN!

Father, you are a faithful Captain in the Army of the Lord. God give us a million holy priests in this country like you

You are right there are worse things already on T.V. here. A couple months ago when the Mohammed cartoon riots/scandal was front page news, it was also reported that Comedy Central channel aired an episode of the cartoon South Park that had the Blessed Virgin mensturating and the Pope checking it out to determine if it was real blood or a "miracle". A sick parody of reported bleeding statues etc.

The chicken shit creators of the show would not show this kind of vile disrespect towards Islam. I think Comedy Central is part of the Viacom family . This is already here.

I don't think our letters will influence MTV but they may very well influence ourselves. Putting pen to paper and putting it in the mail could very well make us who do it a little more self conscious about what we watch.

This happened to me about 15 years ago when I started to pray in public outside the local abortion mill. I had to ask myself some tough questions about how I was contributing to the culture that allowed this and knew that I would have to change so I would not feel like a hypocrite.(Some changes took a lot of effort, some changes came with almost no effort and other things I continue to fail at.)

My point is that protesting this may have very good consequences even if we are not successful in influencing MTV.

Every time I read you, I am more and more convinced that God has called you to a very big purpose! You know it, you are open to what He wants and you aren't afraid to use your gifts and vocation to be a light in a world that is easily led astray!