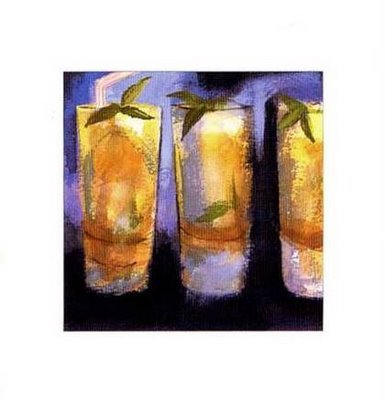 Mint Julep
by Michael Clark
Don Jim Tucker reminds me that today was Derby Day; I completely forgot. Alas, I missed the opportunity to enjoy a mint julep. (Yes, I could make them another day, but I think having a mint julep other than on Derby Day is rather extravagant.)

I am sorry to miss Derby Day, as those of us from the Hermit Kingdom of Cincinnati feel just about as much loyalty to Kentucky as we do to Ohio -- so it's kind of a nationalistic thing.

However, if anyone wants to know my recipe for mint juleps, here it is (although this is mainly a guess -- although I know how I do it, I don't measure, sorry):

* A bag of ice from the store, unless you have an ice-crusher in your fridge door, and it works.
* A lot of mint sprigs. Three or four per drink.
* Bourbon. And don't be cheap, this is once a year!
* Sugar. I've never tried Splenda for this. Might work; you go first.
* Tall glasses. Snooty priests from the Arlington Diocese say you have to use silver cups, which is true, but who has those?
* Straws. Now I'll get snooty: not cruddy plastic straws, but classy, old fashioned paper straws.

Take some of the mint leaves and bruise them (twist them), then put them in a bowl, with some sugar, and then cover with bourbon. This will make a syrup, which you want to have enough of, so you can put a couple of spoonsful in the bottom of each glass. If you're making three or four juleps, I think a teaspoon should do it, maybe two, I can't remember.

You let that sit, while you do the hard part: you get that bag of ice you bought at the store. What, you mean you thought that ice-crusher worked?

Okay, now, you have to smash the ice. My mother used to put some newspapers on the counter, wrap the ice in a towel, and whack it with a hammer. I'm sure there is a better way, and my mom probably found it, but this is what I remember; and since I don't have an ice-crusher thing, this is what I'd have done if I hadn't forgotten it was Derby Day. This is kind of a mess, which is one reason I only do this once a year. It should be obvious, but -- you need a container to put the ice in, so it stays icey.

How much ice? I dunno; a lot. Remember, it melts, and you don't want to run out, so just smash away.

Okay, when your ice is ready, you are ready to make your juleps.

You take some of the syrup stuff, and spoon that into the bottom of your glasses (or cups if you're snooty). If you use short glasses, one or two teaspoons is enough; if tall glasses, go for three. Then add some ice till your cup/glass is about half full, then add some sprigs of mint down the sides; then pack completely with ice.

My mom always said you were supposed to "frost" the glasses--which meant, you stuck a spoon (or your straw) down in the ice, and sorta shifted it around, to get the cup or glass all frosty. I think it just kinda happens.

Finally, over your ice, you drizzle your fine Bourbon. (Sigh: must I specify Kentucky bourbon? There really is no other sort. And, I'm sorry, but as good as Jack Daniels is, it is not bourbon. Ergo, I have never made a julep with it, and have no idea if it's any good) Since you have packed the glass or cup with ice, you won't be drinking as much whisky as you might suppose. However, I can tell you that one year, I liked my julep so much, I made another. That was a mistake.

Now, with your straw in the glass, all the way to the bottom (where the mint is), your julep is ready to drink! Now, take your juleps back into the TV room, where you will find the race is long since over, since you were busy making the juleps, and enjoy your julep as you watch the endless replays!
Remember, you are supposed to sing Kentucky's National Anthem, "My Old Kentucky Home"--but as everyone knows, the more you drink, the better you sing--so be sure to wait until at least your third julep before attempting treating your friends to your musical gifts!
Finally, if you really want to savor the day, read Hunter S. Thompson's hilarious article, "The Kentucky Derby is Decadent and Depraved". Thompson approved of that, of course.
Posted by Fr Martin Fox at 10:50 PM

I completely missed it, too, Father. Oh, well, my excuse is that we were planning my daughter's garden to Mary. :)

It isn't Derby Day without Burgoo and Derby pie either. I tend to go for them more than the mint julep.

"Oh the sun shines bright on my old Kentucky home..."

One of the first songs I learned to play on the piano. I'll drink to that.

Fr Martin Fox
Dayton, Ohio, United States
I am the parish priest responsible for three parishes – St. Mary of the Assumption, Our Lady of Good Hope, and St. Henry, in the Dayton, Ohio area -- in the Archdiocese of Cincinnati. What appear to be my opinions expressed herein are, in fact, my opinions, no one else's. Those in the comments belong to the commenters.