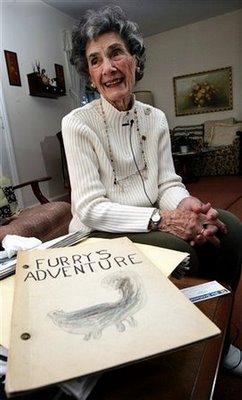 WASHINGTON (AP) -- Senate Democrats demanded release of previously secret papers, written by Supreme Court-nominee Samuel Alito, early in his career, that may shed light on his true views on matters likely to come before the High Court.

"The American people have a right to know," declared Sen. Charles Shumer (D-NY); "if Mr. Alito's papers can show, for example, how he views the Commerce Clause, and the rights of endangered species, then Mrs. Alito must release them. Just what was 'Furry's Adventure'? Did Furry enter into interstate commerce? The stakes are just too risky."

Mrs. Rose Alito, stood firm. "I intend to invoke maternal privilege. And as far as those pesky Senators are concerned, I just have one thing to say: 'Better not mess with Mamma!'"
Posted by Fr Martin Fox at 2:45 PM

"Furry's Adventure" is loosely based on "Danny and the Dinosaur," and we all know that Syd Hoff's explosive, allegorical so-called "children's book" (yeah, right) has served as a blueprint for reactionaries everywhere.

Is it a real book? I never heard of it ("Furry's Adventure")? Or are you pulling my leg (turnabout is fair play)?

The pilot of an unmarked black helicopter told me.

Or was it my neighbor's dog?

I will understand if you prefer to delete this comment as spam. I assure you it is not intended as a diversion or otherwise frivolous.

I complement you on your sense of humor, even as we would seem to share nary a smidgeon of agreement about truth in this world.

This post is on-topic, only to the degree that our government functions carry a huge moral impact, especially in this time of murder dressed up as just war.

I would politely request that you and your readers consider widely available books such as:

As you might imagine, I would also recommend my blog.

I respect you efforts in following your calling. And, I honestly believe if the true historical facts of our recent history were exposed, you and I would not find ourselves at such grave cross purposes.