Who's afraid of Hallowe'en? A Catholic perspective 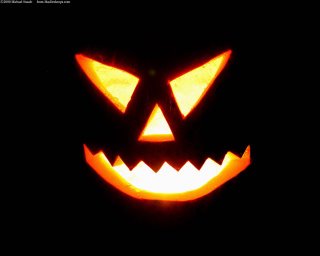 Last night, we had "beggars' night" in Piqua; and I noticed, here in Piqua -- unlike the bigger cities to the south -- that older children don't shy away from the fun of costumes and begging.

Many folks will wait until October 31 to celebrate All Hallows' Eve; and many pleasure-seekers will be at parties all weekend long. What should Christians make of Hallowe'en?

If you visit Christianity Today's website, you'll see how uneasy Evangelical Christians are with this holiday. Meanwhile, we Catholics, along with more secular folks, go for it with abandon.

1. I don't get too excited about the "pagan origins" of Hallowe'en. I'd remind readers of St. Paul's words, in his letter to the Corinthians (I think the first, but I'm not sure just now; you can look it up) about meat sacrificed to idols: we know that idols aren't anything real, there is only one God; but sometimes these things bother people, so be considerate of those scruples, even though you know the idol has no power.

I'd also point out that the whole world, at one time or another, we neck-deep in paganism. I'm not saying it's a good thing; it's (mainly) a bad thing. But a lot of it was a human thing; it was the human mind guessing about supernatural, and perhaps, divine things. A lot of those guesses were intriguing, fascinating, and even insightful. A lot of paganism was innocent; much of it contained, and expressed, virtue; and, of course, much of it "went over to the dark side."

One of the silliest arguments some Evangelicals make (I think I did, in that phase of my life) is that if something was "part" of paganism, then Christians should avoid it. Druids and witches celebrated Hallowe'en (actually something else on the same night), so we shouldn't; pagans had evergreen trees in their homes, so we shouldn't; etc. I'll bet pagans used fire; so I guess cookouts are out, huh?

2. Christ is all powerful -- and the true God is behind all goodness there is. These are simple statements, self-evident if you are a Christian, and yet how often Christians forget them. Whatever good might be found in paganism, comes from...where? It comes from God. Don't fight it; recognize it's true source. Likewise, don't quiver in fear about any of this; evil and good aren't equal forces (that is a blasphemy); good is so infinite that, next to it, evil, while something to reckon with, is comparatively next-to-nothing.

3. But evil is not--from our point of view--nothing. So our freedom in Christ is not license. The thing to concern us, about a celebration of Hallowe'en, isn't some mysterious thing, from the misty past: "do you know the origins of Hallowe'en?" goes the breathless introduction to the conversation. The matter of concern is right out there, visible to all: are you practicing and promoting vice or virtue?

I fail to see anything vicious about dressing up in costumes, going door-to-door in a cheerful fashion, collecting candy. What one does with the candy? That's different. What sort of costume one wears? Certainly. What sort of things one does at the Hallowe'en party? Can be wholesome fun or sinful behavior -- and the same can happen at a celebration of the Resurrection.

5. My solution is to reconnect Hallowe'en with its true provenance: All Hallows. Encourage children to dress as saints (not that you penalize them for not doing so; but you set such a tone that dressing as the father of lies or "Jason" is understood to be out of bounds); inspire them by the saints' examples, and give them the encouragement of having so many friends to meet when, God willing, they reach heaven.
Posted by Fr Martin Fox at 8:18 PM

Are you speaking loosely, or are you forgetting St Anselm? Because the latter, if I remember correctly, said 'malus est nihil', literally that evil is nothing, or at least the absence or negation of good.

Regardless, this fits in with your basic question: are we building up the good, manifesting virtue during Halloween, or doing something else?

We don't have the secular holiday in Australia, so there's less need for disambiguation or anxiety.

I regard the occasional calling at my door during Halloween as an awful Americanism produced by excessive watching of U.S. sitcoms by children who should be otherwise engaged. I frankly don’t reward the practice.

I am much more taken with the Guy Fawkes celebrations – bonfires and explosives. What say you Fr. Fox and Dread on this from the Catholic perspective? :)

Ah, Dreadnought, you have a keen mind; and thank you for visiting, by the way...

I was speaking loosely.

Speaking about evil is always fraught with difficulties, because shocks people to say things like, "evil does not exist" -- which can be fun, if you have the energy to explain why that statement is true and perfectly orthodox (existence is itself intrinsically good, participating, as it does, in the existence of God; all that exists is good; evil is a corruption of good, but lacks its own existence, but is a kind of parasite on goodness).

But in the context of that comment on Hallowe'en, I didn't care to go into all that.

I think you're trying to be provocative, and I prefer to keep a good humour.

Father--first off, let me compliment you on your blog-title--easily one of the best books of the Western oeuvre...

Secondly, it has long been Catholic practice to "baptize" pagan rituals, going back to the "baptism" of the Roman 'singer-god" (whose name I temporarily forget) and making him into a figure of David and Christ...

A good perspective on this can be found at:

Ghosts--seeking an exit from Purgatory? Certainly!!

I seem to be coming a little late to the party - but I remember reading somewhere that, as dad29 mentioned, the Catholic church has "baptized" many pagan customs, just as she has in fact baptized many pagans. . . .