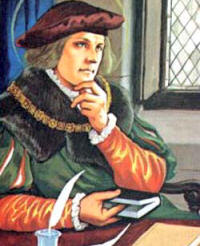 WASHINGTON - The Supreme Court refused Monday to allow the Bush administration to pursue a $280 billion penalty against tobacco companies on claims they misled the public about the dangers of smoking....

The fight at the high court was over the amount of money the companies would have to pay, if the judge rules that they violated a federal anti-racketeering law known as RICO....

The Supreme Court is already hearing a case involving the Racketeer Influenced and Corrupt Organizations Act, and whether the law can be used against anti-abortion protesters. The law, aimed primarily at fighting mobsters, has both criminal and civil provisions. [Emphasis added.]

Reading that article, I thought of this familiar passage from Robert Bolt's play "A Man for All Seasons," where Sir--and Saint--Thomas More argues with his ambitious underling, Roper:

More: There is no law against that.

Roper: There is! God's law!

More: Then God can arrest him.

More: No, sheer simplicity. The law, Roper, the law. I know what's legal, not what's right. And I'll stick to what's legal.

Roper: Then you set man's law above God's!

More: No, far below; but let me draw your attention to a fact - I'm not God. The currents and eddies of right and wrong, which you find such plain sailing, I can't navigate. I'm no voyager. But in the thickets of the law, oh, there I'm a forrester. I doubt if there's a man alive who could follow me there, thank God....

Alice: While you talk, he's gone!

More: And go he should, if he was the Devil himself, until he broke the law!

Roper: So now you'd give the devil the benefit of law?

More: Yes. What would you do? Cut a great road through the law to get after the devil?

Roper: I'd cut down every law in England to do that.

More: Oh, and when the last law was down, and the devil turned on you, where would you hide, Roper, all the laws being flat? This country is planted thick with laws from coast to coast, man's laws not God's, and if you cut them down -- and you're just the man to do it -- do you really think that you could stand upright in the winds that would blow then?

Yes, I'd give the devil the benefit of the law, for my own safety's sake.

(Thanks to Geoffrey Landis's interesting page for this quote.)

A couple of notes for those who may not catch the implications I see in this:

1. Keep this example of loosey-goosey use of law in mind the next time someone asserts how solid President Bush is in his respect for law, the Constitution, and strict construction thereof.

2. Lest you think this an isolated example, recall how the Bush admistration came out in favor of racial preferences -- hedging, qualifying, but in favor -- rather than simply say all race-preferences in law are wrong; and recall that President Bush signed the First Amendment restricting "McCain-Feingold Campaign Finance" law, despite saying, while campaigning for President, that he was against it and it was probably unconstitutional.

3. Please note how eagerly government officials reach to use a law beyond its original intention and justification: RICO was enacted to fight the Mob; but in time, prosecutors eager to make a name for themselves, used it against abortion protesters, and now against purveyors of a -- read carefully -- legal product.

4. Please keep point 3 in mind in all disclaimers from all lawmakers and law-enforcers that their new laws will be applied in limited ways: e.g., the aforementioned McCain-Feingold assault on the First Amendment, the so-called "Patriot Act" (note: just the name of the law ought to set off warning bells -- if you're against it, you're not a patriot; since when is it treasonous to question the wisdom of legislation?), "hate crime" laws, etc.

5. Please note the rachet effect at work: when RICO was passed, objections were raised that it might be misused; scoffing ensued. Once passed, the next step was justified on the basis of existing law. (A similar argument was used in the "Patriot Act" debate.) The underlying question -- is this good? is this right? -- was largely ignored.

6. Anyone who somehow infers this as an endorsement of, or being soft on(choose one) -- smoking, cigarette makers who do evil things, terrorism, etc., has almost completely missed the point of this entire post.

Can I quibble with your characterization of Roper? The Bl. William Roper the Younger was More's son-in-law and biographer. He wasn't so much ambitious as zealous.

That's an great play; have you seen the version with Charlton Heston in the title role?

Oh, well, I don't really have any opinion on Blessed William (whom I hadn't heard of); I picked up the "ambitious" comment from the site where I found the exerpt from "A Man of All Seasons." Glad you offered the correction.

I can't recall seeing the Charlton Heston version. I saw a version with Orson Welles as Woolsey, as I recall.

Yes, the Paul Scofield version (Scofield later was the Ghost in Mel Gibson's Hamlet and the King of France in Branagh's Henry V) is good, too.

The Heston version of Man For All Seasons is less a screen adaptation then a filmed version of the stage play. Roy Kinnear (in his final role) is outstanding as The Common Man, and Sir John Gielgud plays Woolsey. And Heston directs. It's worth finding. (My nearest Catholic giftshop carried it.)