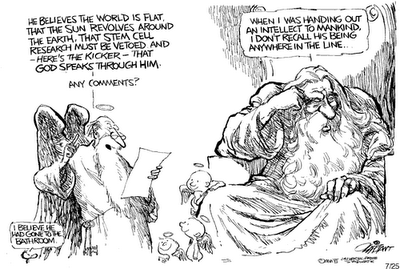 Now, who is Mr. Oliphant describing? President Bush? I'm not sure; but certainly, everyone who agrees with his veto of legislation using your tax dollars to murder embryonic human beings to harvest their cells for research?

Now, let us pause only briefly to note Pat Oliphant (whose work I admire--he's very talented, and in past years, before his monomania with Mr. Bush, insightful) is lying, repeatedly: (1) virtually no one opposes "stem cell research," the issue is such research that requires destroying embryonic human beings; (2) the veto was not of such research, but of legislation forcing taxpayers to pay for it; (3) he calls opponents of embryonic stem-cell research flat-earthers and people who believe the sun revolves around the planet--and that, too, is a lie...

But then, let us note the colossal hypocrisy of this cartoon: the opponent of embryonic stem-cell research (somehow, Mr. Oliphant can't be bothered to note this crucial detail -- part of his lie) also believes, "here's the kicker--that God speaks through him."

Uh-huh; now we all pause to chortle and guffaw at that groaner...I mean, how dare anyone be so presumptuous, so arrogant, so self-righteous? And, as the cartoon indicates, so brainless?

But then pause and notice the cartoon itself: note that Mr. Oliphant is, himself . . . speaking for God.

After all, according to Mr. Oliphant, God approves of embryonic stem-cell research--only brainless flat-earthers want to veto its tax funding.

Father,
Would you say that the destroying of full grown men is sometimes justified?
I don't mean where God makes the judgement, but where man makes the judgement to kill his fellow man. If you can justify the killing of one's fellow man, than I would think it would be no problem to find a justification for destroying one's less developed/embryonic kin. And if one can justify it, than there must be something beneficial which would warrant funding by the people. I think we should tremble at our faithlessness, that we wouldn't be protected from the so called potentialities of hostility and illness without the recourse to destroying our fellow man.

I wouldn't approach the question that way, based on Catholic teaching.

Other than the possible exception of the death penalty, more below, it is never morally justified to "destroy"--i.e., kill--anyone deliberately.

Now, that may surprise you, since Catholic teaching is not pacifist; but here is the point: when one kills an enemy combatant in warfare -- or any aggressor -- what is permitted is to use deadly force, if necessary, in order to repel the aggressor.

I.e., it is wrong to intend the aggressor's death; but in our imperfect world, one may not be able to avoid it when attempting to repel him.

The Catholic Church has not deemed the death penalty intrinisically evil, but has recently urged it not be used. But the death penalty example doesn't help you, because that is only justified when one is convicted of a grave crime. That clearly doesn't apply to embryonic human beings.

As far as I know, the Catholic Church has made no decision on the status of existing embryonic stem cells. I attended a lecture at the Seminary here in Cincinnati where Father Tadeusz Pacholczyk, Ph.D.the Director of Education at The National Catholic Bioethics Center gave a fascinating talk. He did an amazing job of making a very difficult subject amazingly understandable. During the talk, he mentioned the use of these abandonded humans in the project where they we implanted and allowed to grow and live. He said the church had not yet made a final decision on this but he placed his bet on this not being allowed as several wrongs do not then make it right. He felt that the Church would come down on these embryo's simply being kept in their frozen state until they reached a normal death which time is not fully known. If you ever have a chance to hear him or could bring him into your parish for a talk, I am sure you would find his knowledge and ability to make it easy to understand very amazing.

The Catholic Church may not have decided whether existing, frozen embryos should be adopted and carried to full term by a willing couple (embryo adoption), but the Church does not sanction killing those embryos or using them for research. I don't know about letting them die... it would be a natural death, but I don't know if that would be the right decision when they could be allowed to live through embryo adoption. The answer will probably hinge on whether embryo adoption is finally allowed. Do you have anything to say on this, Father?

In answer to your question, about adopting embryonic human beings, this is a provisional judgment:

I would say that if an embryonic human being has been abandoned, then adoption by another couple becomes a least-bad, necessary option.

Obviously, this hinges on what counts as "abandonment" -- and one naturally would be concerned that an "adoption system" doesn't induce that.

This whole area is full of problems; the thing is, once you go down a wrong road like this, and then, well down the road, you ask Mother Church to give you the right thing to do, one hardly knows how to answer, other than: turn around and go back!

I can not recall reading anywhere the stem-cell research has produced anything viable in regards to finding cures.

Destroying potential human being is an awfully harsh, cold-blooded thing. And nothing proves that it would resolve...anything.

Of course for your reasoning to work here one must equate a human embryo with a human form that has a higher capacity. Of course every cell in your body has all the genetic material to create a human including the millions and millions of skin cells and hair cells you lose over your lifetime.

The law distinguishes all the time on capacity. It’s a tough call in the abortion area for instance and in the provision or withhold of medical treatment but it happens everyday in every hospital in the world. In my Country as part of third world aid patients are flown in fixed up in a first world hospital and sent back to a third world hospitals where they will certainly go to a “natural death” because of the standard of care. The families know this and literally beg the accompanying transit nurses to return their beloved one back here which cannot be done. Very tough on those nurses as the relatives through themselves at them at the airport.

What is natural about the death of an embryo (a little collection of cells) in a nitro freezing cylinder that cannot usually survive outside the body?