Superman not so super 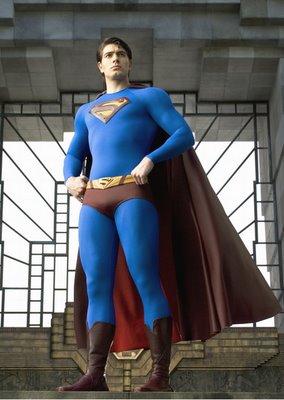 I had seen some mixed reviews, but I figured the action scenes would be pretty cool; and some of them were. But not enough of them.

This was one of those flicks were the director clearly has some techniques he carries through with great attention and skill -- and it really shows. He achieved a kind of soft, gauzy look, giving the characters, in many scenes, a kind of animated look -- which, I assume, was to convey the comic-book motif. And he really loved playing up the look of Metropolis (which looked a lot like New York, natch). So, the film had a "look" -- and it was all very well executed, very elegant, very snazzy.

Problem: in all that, the story seemed to get left behind. And, it turned out, this was far more a "chick flick" -- i.e., clearly it was a lot more a romance, and about poor Superman's feelings, than about a fight for "truth, justice, and all that stuff."

And, somehow, the movie managed to waste its best asset -- its villain! Don't actors love playing the villain in this sort of thing? Here it was Kevin Spacey, who is entertaining, as Lex Luthor. Turns out all his best stuff was in the trailer.
Posted by Fr Martin Fox at 10:57 PM

A lot of movies these days could use with a good 1/2 hour visit with the chain saw.

I've learned over the years, that sometimes you can tell if a movie is going to be bad, even if you like the trailer. If the cheap laughs are funny, but still cheap, that's a bad sign -- just to give an example. In the case of this movie, the idea of an illicit relationship and a child out of wedlock as somehow normal or respectable, is already problematic as a storyline. This is doubly so if the hero has anything to do with it.

What? Not a word about the sign in the heavens, when Superman falls back to Earth with his feet crossed and his arms outstretched, looking all the world like the corpus on a cross? And the empty tomb scene in the hospital, complete with discarded shroud (ok, bed sheets...)?

Why, one could say the Superman Returns is the Passion of the Christ of 2006, without the exploding blood packets.

What? Not a word about the sign in the heavens, when Superman falls back to Earth with his feet crossed and his arms outstretched, looking all the world like the corpus on a cross? And the empty tomb scene in the hospital, complete with discarded shroud (ok, bed sheets...)?

I thought much the same thing. From Jor-El's line, "I have sent them you, my only son," to Superman's line to Lois, "You say the world doesn't need a savior, yet every day I hear people crying out for one," to the scenes you mention, it seems that poor Kal-El suffers from quite the Messiah complex. Heck, his side was even pierced! The USCCB's review of the movie (http://www.nccbuscc.org/movies/s/supermanreturns.shtml) notes the same.

Well, the "messiah" idea is hardly a new one, vis-a-vis Superman; and I'm not exactly offended by it. It found myself wondering, what would be like to watch this and not even pick up these rather obvious allusions? And what, really, is the point of alluding to Jesus Christ? It's not as if this is a better telling; nor is it really accurate (if I cared, I'd say it's Arian or something -- if I cared).

I found myself thinking something like, "um, you're going to all this trouble to fashion this "myth" when, er, (a) it really happened and (b), what did happen is a whole lot better story!

Thx for saving me some money. I think I will watch it instead on netflix